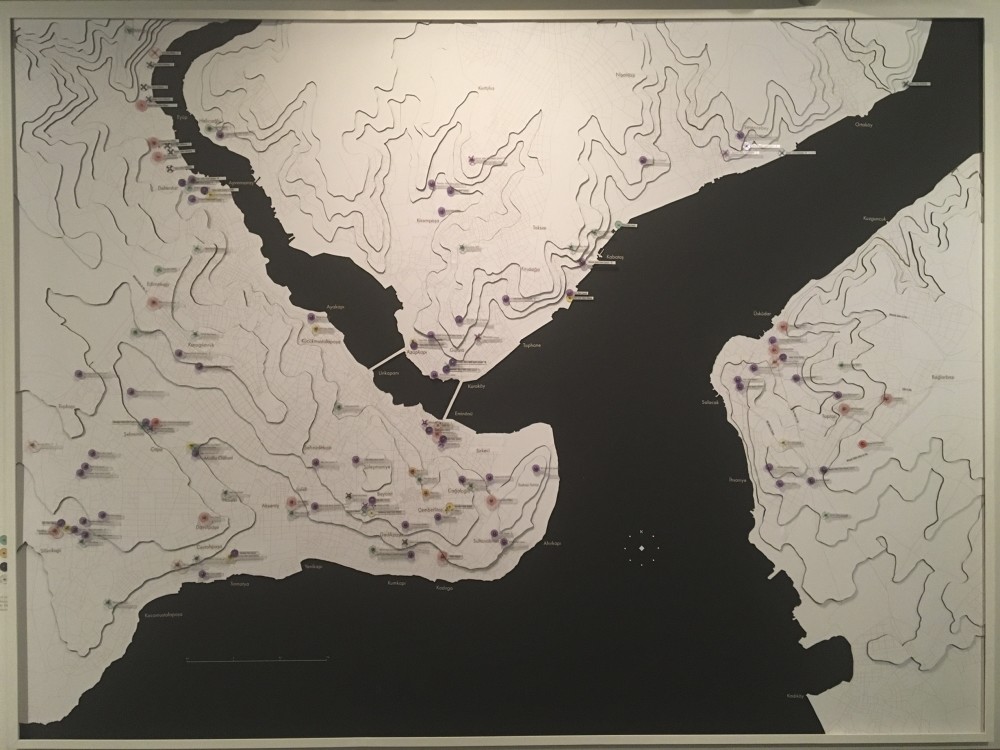 SALT Research produced the u201cMap of Women Patronsu2019 Structures in Ottoman Istanbul for the Commissionersu2019 Exhibition on display until Nov. 26.
by Matt Hanson Oct 12, 2017 12:00 am

SALT Galata was initially designed by the French-Turkish architect Alexandre Vallaury for its 1892 inauguration as the Ottoman Bank. The halls within its neoclassical and orientalist facades continue to demystify the twilight era of Ottoman imperialism since reopening as SALT in 2011. Currently on display until Nov. 26 one floor below the effulgent marble lobby entranceway is the ‘Commissioners' Exhibition,' an obscure archival resurrection that seeks to animate the role of bureaucratic creativity in the diverse urbanization of Istanbul

The extent of meticulous detail drawn by SALT research for the "Commissioners' Exhibition" is practically unfathomable to the non-specialist. Inspired by the characterful Kemal Kurdaş, former president of the Middle East Technical University (ODTÜ) in Ankara, who in the 1960s commissioned architectural projects with an eye for the holistic integrity of urbanization, it is a proud intellectual achievement in collaboration with Pamukkale University, PAB architects, and ODTÜ Faculty of Architecture. A score of individuals contributed to its present form in sharp lines and clear points. Among four floors of presentations shown throughout SALT Galata is the "Map of Women Patrons' Structures in Ottoman Istanbul" at floor -1.

Spanning a temporal scope of four and a half centuries, the "Map" is only a sideshow to the central content of the exhibition's focus yet its implications are far-reaching beyond the sphere of the SALT research library desk. The 50 plus women represented were typically elites, enjoying familial ties within the fabulously nepotist, bygone Ottoman social circles, and they used that power, economically, and even politically at times, among the religious rule, to actively participate in the construction process to urbanize the ever-expanding imperial capital. 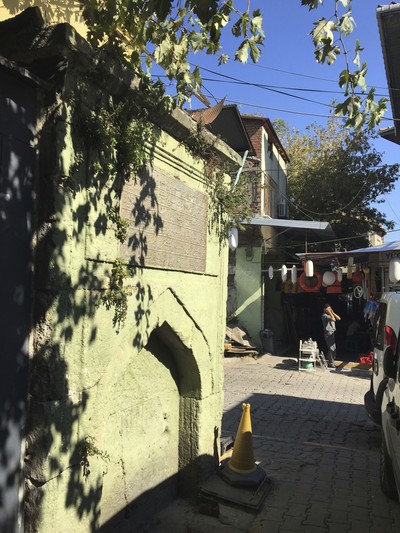 Verdinaz Kad›n Fountain was the modest, 18th century construction effort of the childless wife of Sultan Murad I.

Firuzan Melike Sümertaş led a team at SALT Research with cartographer Murat Tülek to piece together records from an archive dedicated to the memory of the restoration specialist Ali Saim Ülgen with insurance, fire and road maps, street guides, and aerial photographs from the late Imperial to early Republic eras. With graphic designers and editors, they mapped over 160 structures, including complexes, waterworks, dervish lodges, mosques, schools, hospitals, and residences built due to patronage from Ottoman women.

Many of the women patrons were especially colorful figures, such as Emetullah Gülnuş Valide Sultan, who commissioned three extant fountains and the demolished Yeni Mosque in Beyoğlu, the closest structures to SALT Galata, as well as the Yeni Valide Complex and Waterway in Üsküdar. Her full name was Devletlu İsmetlu Emetullah Rabia Gülnûş Valide Sultan Aliyyetü'ş-şân Hazretleri and she wielded it with a fine hand as the last imperial concubine to legally marry an Ottoman sultan. At the age of 3 she was captured along with her native island of Crete, and enslaved from her Greek birth family of nobles in Rethymno, to later accompany Sultan Mehmed IV on hunting expeditions to the Balkans where she became his favorite enough to bear two future sultans with him.

She was an enterprising sort to say the least, as she was rumored to have murdered a fellow lady of the harem in order to be closest to the sultan's affections, and afterwards had even ordered the strangulation of her brother-in-law after the birth of her first son. By the time she had built her first fountain and Yeni Mosque in Karaköy the year was 1698, and she was then officially Valide, the mother of the sultan. While her architectural legacy is most glorified in the Yeni Valide Mosque in Üsküdar, researchers at SALT have brought a fuller picture of her influence throughout Istanbul into focus. 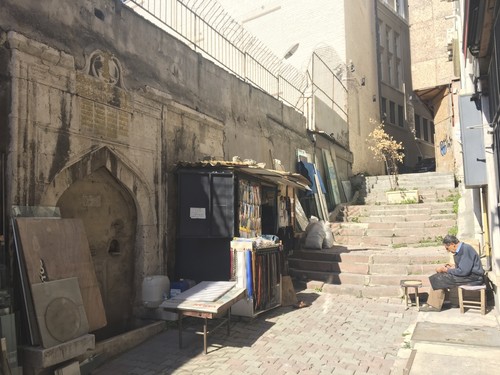 The last vestiges of Emetullah Gülnuş Valide Sultan are barely visible in the workaday environs of the Hırdavatçılar hardware bazaar.

Yeni Mosque was finally torn down in 1959 after it began deteriorating in the early 20th century though its accompanying fountains remain, despite one of them being defunct and now often covered over with the tools of an itinerant cobbler and construction equipment beside the gate to Hırdavatçılar Market. Across from the hardware bazaar is Bereketzade Mosque and Islamic school (madrasah), which now stands furnished with an exterior plaque memorializing Gülnuş Emetullah Sultan. And inside the market, one of the fountains is still in use where men take moments out the workday to hydrate and wash under three centuries of legacy patronage.

The power and influence of Gülnuş Emetullah Sultan was rare, as she represented a genuine last hoorah in the influence of women in the highest court of Constantinople, especially those of non-Muslim origins. Later women patrons like Verdinaz Kadın, the childless consort to Sultan Mahmud I, did not hold as much sway, as visualized with spectacular graphic precision in the gendered cartography of the "Commissioners' Exhibition." Her fountain in Galata survives, even while its 18th century architectural subtleties are all but banished to modern usage in a truck parking lot within the shorefront bowels of metalwork storehouses. As Muzaffer Özgüleş explained in his book, "The Women who Built the Ottoman World," the power of women was absolutely measured by the traditional role they played firstly before they could partake in such socially and intellectually gratifying activities as architectural patronage.

The very definition of urbanization changed drastically in the last century of the Ottoman Empire, as its fountains remain to tell tales of lost days. Contemporaries laugh nostalgic imagining the pre-modern world where women circled the elegant stone of fountains under the watchful stare of ambling men who waited for the drop of a kerchief to signify attraction. Fountains were gendered meeting points. To build one was to serve the people as they maintained the fabric of community socialization within the city as a place where the worlds of men and women could flirt, and with luck, change hands over mutual city planning efforts.

To open the Thursday cinema series at SALT Galata, the film "Citizen Jane: Battle for the City" (2017) screened to a packed auditorium fit for over 200 theatergoers, and still the late and eager stood for lack of seats. Its message of women leading urban development was relevant to the concurrent "Commissioners' Exhibition" that a city is about people, not highways and buildings as the progenitors of Robert Moses and Le Corbusier would assume. And the "Map of Women Patrons' Structures in Ottoman Istanbul" further attests to the innate social diversity that vitalized Istanbul, one of the greatest cities in history, for over four centuries.

SALT Research is breathing new life into the architectural necropolis that is Ottoman Istanbul with gaining contemporary relevance to the global dialogue on gender equity in cities. They have presented formidable evidence to contest a flagship article titled, "How are women changing our cities?" published by The Guardian in 2015, as its author Lucy Bullivant wrote: "Cities are cultural artifacts. Yet we live in cities where nearly 100 percent of the environment around us has been owned, legislated, designed and implemented by men. This is because, outside of monarchic city-builders like Catherine the Great, women have only had access to positions where they could engage in the shape and evolution of cities for the last 100 years."

Ikeda said, "If you can understand a city, that city is dead." In the context of the film, he emphasized the central theme that cities live and die on the integrity of daily-changing community foundations, and that, if they are to be sustainable, they must be planned from the bottom-up. While it is true that the women urbanistas who built Constantinople from as early as the 16th century mostly represented the highest class where they could have a greater social effect outside of the family, they also included a few court stewardesses, a housemistress and a head of female servants at Topkapı Palace whose deaths are unknown yet who are remembered by the mosques, schools and fountains they built for each other to make a more inclusive city.