In Beirut, play about Syrian war gets as close to home as it can 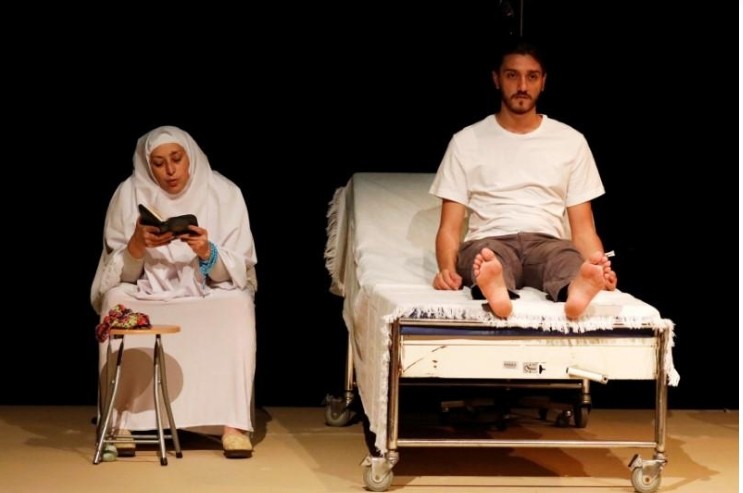 Actors perform during a rehearsal of the play called ,While I Was Waiting,, at Dawar al-Shams theatre in Beirut, Lebanon.
by reuters
Oct 26, 2017 12:00 am

A play about Syria's war, told through one family's tragedy, made its Lebanon debut on Friday, the closest it will ever get to being staged on home soil, its Syrian director said.

"It would be impossible to perform it in Syria. There are red lines, and the censorship that was there before 2011 is still there today," said Omar Abu Saada, one of the country's best-known theater directors.

The play - called "While I Was Waiting" - is based on the real-life story of a young man found beaten unconscious near a hospital in Damascus in 2013, but the circumstances of his beating and subsequent death remained unclear. Abu Saada knew the man and his family.

"When I thought about working on a new project, this was the story that came to my mind. It pretty much imposed itself," he said.

In the play, the man oscillates between life and death and the lack of answers unnerves his family. His suspended state is a metaphor for the state of waiting that all Syrians share, whether inside the country or abroad and regardless of their political views, the director said. Another thing all Syrians share is loss, he added.

The Syrian conflict, which began with a popular uprising against the state, has raged on into its seventh year. The war has killed hundreds of thousands of people, made more than half of Syrians homeless, and created the world's worst refugee crisis.

"Syrians today are not in a single place, they are suspended. Waiting is something that we all have in common," Abu Saada, 40, said. "Most people lost someone close, either by death, emigration or imprisonment. Everyone lost something."

This has changed the way Syrians think, their social fabric and even the way they make art, he said.

The play charts the disenchantment of young Taym, the comatose patient, from his hope for change at the start of the 2011 uprising to his despair as it spiraled into a war.

Syria's young generation, active in organizing and documenting the mass protests, lost the most in the violent turn of events, he said. "The state of coma is more of a metaphor for the lack of power to change things," Abu Saada said.

The play made its debut in Brussels in 2016 and has since been staged in France, the United States and Japan among other places.

The six cast members said they could not meet anywhere in the Arab world for rehearsals because of visa restrictions.

"So in the end, we rehearsed in France which under normal circumstances would have been the harder place to go to," said Nanda Mohamed, a Syrian actress.

The writer, who has previously lived in Lebanon, had to leave Beirut in 2015 when the Lebanese government imposed stricter conditions on Syrians in the country. But he said being forced to leave Lebanon helped him view the war differently.

"Sometimes the geographical distance helps create the gap for critical thinking and I tried to take advantage of that," said Mohamed al-Attar, 37.

"What happened to us was tragic but what would be more tragic is if we couldn't review things. It would be disastrous if after the heavy price we paid and we continue to pay that we also do not have the courage to think about what we lost and boldly criticize it," Attar said.

Attar previously worked in Beirut with director Abu Saada on an adaptation of the Greek myth Antigone performed by an all-female cast of Syrian refugees.

Both agree the play is about fuelling debate about a war that is not yet over.

"The idea of creating a play about something that you are living in the middle of and still being affected by and probably have not yet processed is difficult," Abu Saada said. "But I know that there is no running away from it."