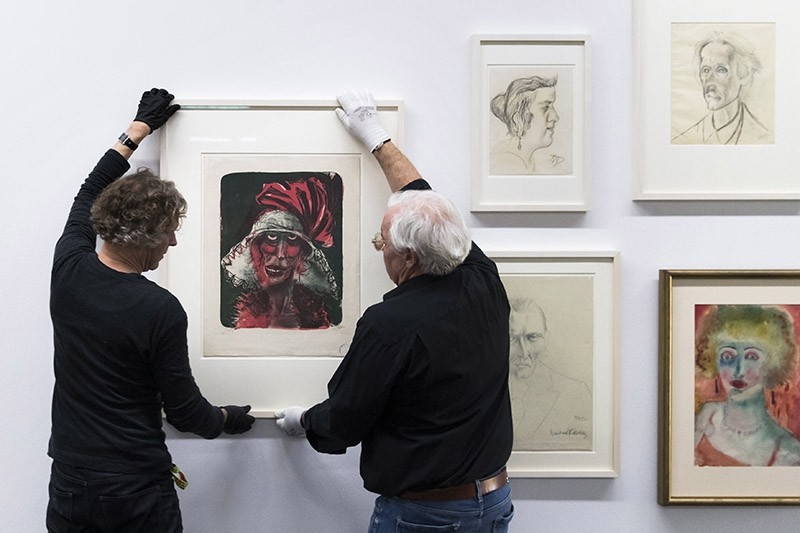 Museum technicians hang the painting ,Leonie, of German painter Otto Dix, before the opening of the exhibition 'Gurlitt: Status Report. Degenerate Art - Confiscated and Sold', in the Kunstmuseum in Bern, Switzerland, October 30 2017. (EPA Photo)
by Compiled from Wire Services
Nov 01, 2017 12:00 am

A Swiss art museum is showcasing a new exhibit of artwork deemed "degenerate art" by the Nazis, drawn from a collection of some 1,500 works found in the homes of German collector Cornelius Gurlitt five years ago.

The Bern Kunstmuseum exhibit features over 200 modern art pieces confiscated in a Nazi crackdown against so-called "degenerate art" in 1937 and 1938. They included Expressionist and Constructivist paintings by artists such as Otto Dix and Franz Marc.

Wednesday's presentation was for the Swiss part of parallel exhibits linked to the collection, which came to light in 2012. Gurlitt died in 2014.

The other exhibit opens Friday in Bonn, Germany, with a focus on art stolen by the Nazis from Jews.

The works in the two exhibitions, which run in Bern and the German city of Bonn until March, are just a small fraction of the more than 1,500 pieces discovered in 2012 in the possession of Cornelius Gurlitt.

His father, Hildebrand Gurlitt, worked as an art dealer for the Nazis starting in 1938.

The discovery of the stash made headlines around the world and revived an emotional debate about how thoroughly postwar Germany had dealt with art plundered by the Nazi regime.

"At last it is out of hiding," the German weekly Die Zeit said about the collection, noting that "for the first time it will be possible to view what many have spoken and written about in the past few years, without being able to see it so far."

The show, split between the two museums, is the result of years of disputed research into Gurlitt's collection, which was discovered in the course of a tax probe.

Inspectors found the works in Gurlitt's Salzburg home and his cluttered Munich apartment, many in poor condition, unframed and mouldy.

"With these two exhibitions, we wish to pay homage to the people who became victims of the National Socialist art theft, as well as the artists who were defamed and persecuted by the regime as 'degenerate'," Rein Wolfs and Nina Zimmer, directors of the Kunsthalle Bonn and the Kunstmuseum Bern, respectively, said in a statement.

Gurlitt, who died in 2014 at the age of 81, was described in the press as a recluse who lived off of the sale of his collection, valued in the millions of euros.

The exhibition in Bern will focus on modern works which were classified by the Nazis as "Degenerate Art" in 1937 and confiscated for sale abroad.

In Bonn, the show will present art that was looted from victims of the Nazi regime and works whose provenance has not yet been established.

The exhibits themselves have prompted difficult legal tangles.

When Gurlitt died he left more than 1,500 artworks to the Bern museum.

It accepted the collection, though it left about 500 works in Germany so that a government task force could research their often murky origins.

But determining their provenance has been slow, and it is not yet clear how many of these works were stolen.

Cezanne behind a cupboard

Four, including Max Liebermann's "Riders on the Beach" and Henri Matisse's "Seated Woman", have now been returned to their heirs.

And last week, the German Lost Art Foundation said it had identified a painting by Thomas Couture as belonging to French Jewish politician and resistance leader Georges Mandel.

Other families have also tried to lay claims to works.

Relatives of Paul Cezanne have asked for the return of "La Montagne Sainte Victoire," a painting found in Gurlitt's Salzburg house behind a cupboard.

"It is not yet clear how the work came into Hildebrand Gurlitt's possession," Marcel Bruelhart, vice president of the Kunstmuseum Bern foundation, told the Frankfurter Allgemeine Zeitung.

One of Gurlitt's cousins also contested the donation of works to the Bern Museum, claiming that Gurlitt had not been of sound mind when he wrote his will.

Her appeal was thrown out by a German court last December, clearing the way for the current exhibitions.