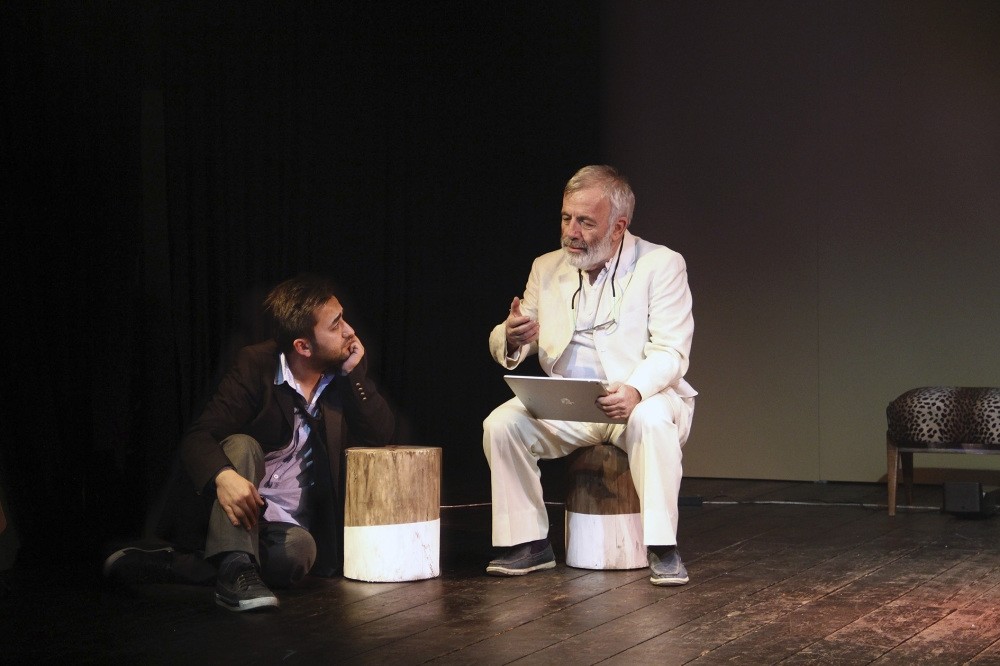 Ulvi Alacakaptan said they employ different theater languages, and the play is both entertaining and thought-provoking.
by Daily Sabah Nov 21, 2017 12:00 am

Theater actor and director Ulvi Alacakaptan warns young people against the effects of drugs with a play which was inspired the Jalaladdin Rumi's Mathnawi.

Regarding the play, which will be put on the stage with the support of the Culture and Tourism Ministry, Alacakaptan told Anadolu Agency (AA) that he will celebrate his 50th year in theater next year, saying: "It goes very well. They always say we are having so much fun. We are not having so much fun, we are getting tired but we enjoy it."

Stressing that the play has a very interesting story, Alacakaptan said: "I am together with people who I agree with most and enjoy producing together with them. Everybody falls all over the play. I hope it will be good."

Alacakaptan emphasized that author Ahmet Mercan did a very good job. He added: "This is a Rumi fable. As it is known, a fable means 'an animal story.' Rumi's Mathnawi is full of many exemplary animal stories. This is an exemplary story, but when it is an animal story, people assume that it is a children's play. But it is a play that starts with a fable but continues with the issues of greed, power and rebellion and enters the mind of a high school student who is a drug addict. He is surprised and asks where did I come to? It is a story about the rescue of a young person with the help of a wise man." Explaining that they employ different theater languages and forms in almost every play, Alacakaptan said that this play is both entertaining and thought-provoking.

Emphasizing that they try to give advice to the audience in the play, Alacakaptan said: "However, our purpose is not only to give advice to young people, but also guide their parents, teachers and others who have a share in raising them. There are many ways for that, and this is one of them. In fact, performing art about the issue of drugs is very sensitive work. You might suddenly make a mistake. It is discussed around the world. As showing what drugs cause, you might turn it into an attractive activity with dances and concerts. This play does not do that."

Alacakaptan said that art is one of the many ways to draw attention to explain the problem of drugs. "This play is not our first touch on this issue. Doing drugs has dropped to very young ages. There is an ongoing attempt to raise awareness about this, but they are not enough. First of all, what is said is not true from the beginning, because many things called drugs are in fact stimulants. When you say drugs, it feels like they put people to sleep, but it is not true. Firstly, synthetic drugs are a road of no return. Taking that road should be prevented in the first place. It is very difficult to make them return after they take that road," Alacakaptan said. The word for drugs in Turkish, "uyuşturucu," translates as "sleep inducer."

He said that there are seven people, including him, on stage in the play. "After entering cooperation with the National Education Ministry, we would like to reach the audiences that we are going to address in high schools and maybe at youth camps when summer comes," Alacakaptan said.

He also said that the musical part of the play is very catchy. "Do not be a mere spectator [of the problem], be an audience [of the play]. If you do not want to be played, do come to the play," Alacakaptan said.