Visitors look at a black-and-white reproduction of a painting titled ,The Wounded Table, by late Mexican artist Frida Kahlo.
by Dec 04, 2017 12:00 am

Two Portuguese sisters are in search of iconic Mexican artist Frida Kahlo's missing work, ‘The Wounded Table,' hoping to find clues from the public through a suggestion box as to where it can be and how it can be found

After taking an overnight bus to Poznan in Poland for an exhibition on Mexican artists Frida Kahlo and Diego Rivera, two Portuguese sisters are now standing in front of a curious blue suggestion box.

"Who can tell us what happened to the missing painting or where we can find it?" reads a sign next to a photo of Kahlo's largest work, "The Wounded Table," a mysterious surrealist masterpiece that vanished without a trace in Warsaw more than half a century ago.

"I wrote that the painting was probably destroyed. Or it could have been stolen and sold on the black market," says Ines Cavaco, 21, currently studying in the Polish city of Krakow.

"For sure. It's sitting in someone's living room," adds her sister Joana, 23, a megafan who did her hair up with flowers in homage to Kahlo's trademark look.

A black-and-white replica of the horizontal oil painting, a double self-portrait with Kahlo represented both as herself and a wounded table dripping with blood, can be seen until Jan. 21 at "Frida Kahlo and Diego Rivera: Polish Context."

The exhibition at the ZAMEK Culture Centre - a castle built for Kaiser Wilhelm II and later meant to be a residence for Adolf Hitler - spotlights the famed married couple's little-known links to Poland.

Several dozen of their works shine against a vibrant yellow wall that recalls Kahlo's bright palette and love of life, despite loneliness and pain brought on by lifelong health issues and Rivera's many affairs, including with her sister.

The exhibition also features work by two Polish-born Jewish artists close to the couple: Photographer Bernice Kolko, who captured Kahlo on her deathbed, and muralist Fanny Rabel, one of Kahlo's most devoted students. 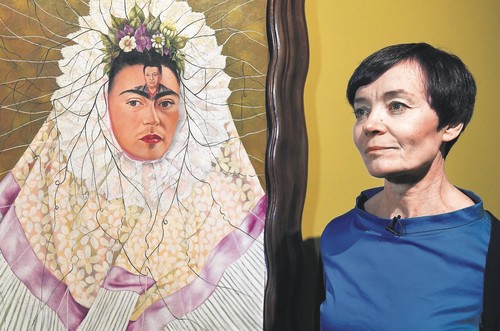 Anna Hryniewicka, the director of the ZAMEK Culture Centre, poses in front of a painting titled "Diego On My Mind" (Self-portrait as Tehuana) by late Mexican artist Frida Kahlo.

Finally, a blue room focuses on the 1955 Warsaw exhibition of Mexican art where "The Wounded Table" was last shown.

"It must be somewhere. It cannot have just disappeared. Such a big painting. Unless they burnt it in an oven in the 1950s," curator Helga Prignitz-Poda told AFP.

"That is one of the reasons why I made the exhibition. Because somebody in Poland might remember that he had seen this painting once somewhere."

At 2.4 metres long by 1.2 metres high, larger than a standard door, the painting was unusual for Kahlo, who preferred to work small, unlike her muralist husband Rivera.

The artist known for her unibrow, long skirts and heavy jewellery created the painting for the 1940 International Exhibition of Surrealism in Mexico City. For a long time it hung in her dining room, before she donated it to the Soviet Union out of love for communism.

The Last Supper-like work was then sent to Warsaw for the exhibition that would travel around several socialist countries, but the painting never made it past the first stop.

Prignitz-Poda points out that while the painting is considered great today and would be worth around $20 million (17 million euros), back then its "surreal absolutely cruel depiction of the double Frida" went against the preferred socialist realist style.

"There were official statements saying that this painting is not exhibitable, that it is so terrible that they really didn't find it worth the money to pay for transport. It is possible that the [Russian] landlords didn't want it back," she said.

For Prignitz-Poda, who just published the book "Hidden Frida Kahlo: Lost, Destroyed, or Little-Known Works," the disappearance is frustrating because only half of Kahlo's 300 works are available to see. The rest are missing, burned or in collections that never lend.

"I'm happy that I got to see even a bit of this legend in the original. Mexico's far," said actor Krzysztof Najbor, 56, who took the train up from his southern mountain town of Zakopane for the exhibition.

"After leaving a gallery, my family and I always ask ourselves what we'd walk off with. What we'd like to have at home. Well, there was this small Frida self-portrait that I really liked," he told AFP with a laugh.

The self-portrait is still there. And "The Wounded Table" is still missing, despite many contributions to the suggestion box.

"People write all kinds of funny things. That because the table's wounded, the painting must be at the hospital. Or it's at Putin's place. Or under their rug at home," ZAMEK director Anna Hryniewiecka told AFP.

"Drawings too. Children make little maps of how to find the painting. There are reviews of the exhibition. But no information that would actually point us towards some kind of clue."

But there is hope for a happy ending: a Rivera mural, "Glorious Victory," that also disappeared in the mid-1950s was discovered in the storerooms of Moscow's Pushkin Museum in 2000.