The Afterlife of Materialism: Julie Upmeyer at Operation Room 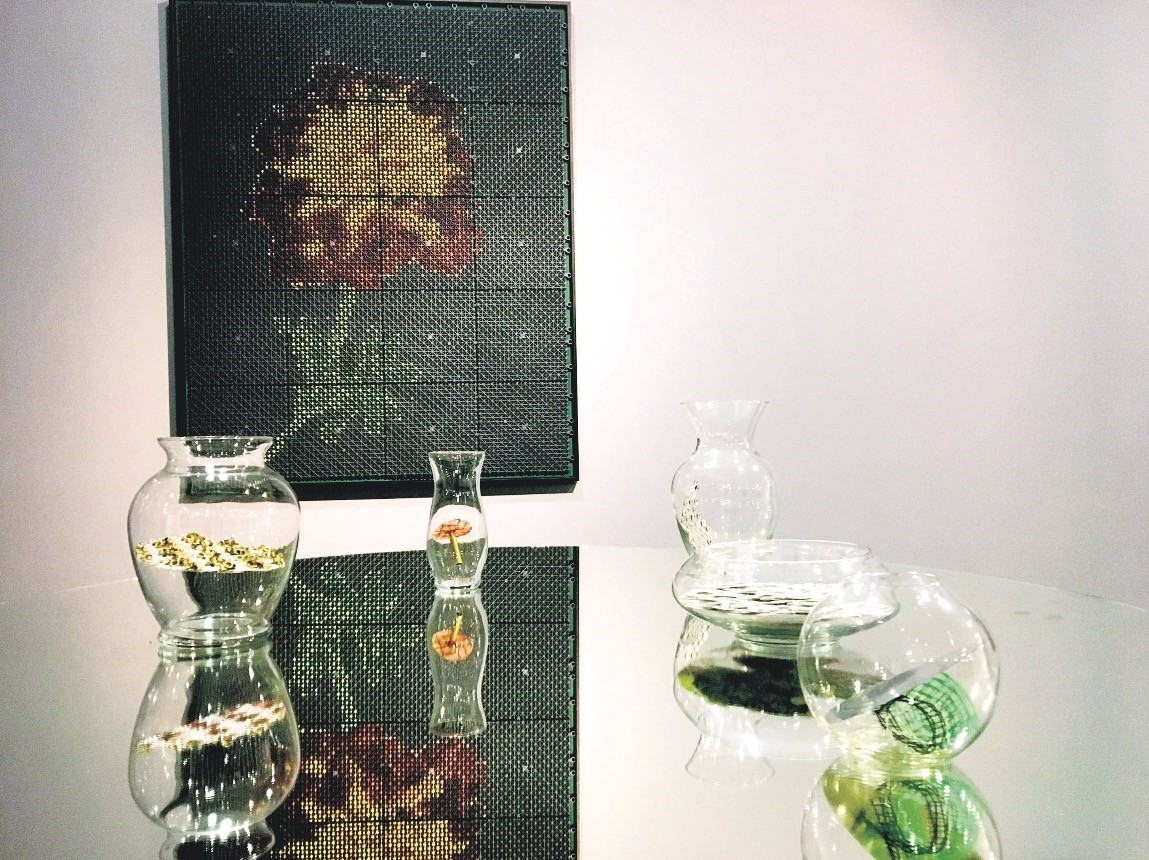 Inside the Operation Room at the American Hospital, the only art gallery in Istanbul located in a health center, the ‘in-finite' exhibition by transdisciplinary contemporary artist Julie Upmeyer is a visionary interrogation of resource sustainability and life extension with apt site-specific elements

On any given day, the stairs and ramps leading into the American Hospital are busy with the constant flow of the medicalized citizenry who, often injured and mostly anxious, pass by and sometimes enter the adjacent doorway into Operation Room where distinct curatorial designs exhibit new art with a heightened sense of material interdependence. The local fusions of urban society amid the requisite, modern institution surrounding the gallery make for peculiar collaborative inspirations where visual art crosses over into the clinical, scientific realms of human healing. The keenly participatory curator, Ilgın Deniz Akseloğlu has directed the space since November 2014, further enlivening the gallery that for the last decade has made its name by testing the line where creative metaphor confronts lived experience.

Despite the seeming limitlessness of its broadly-defined modern expressions, art has maintained its singular reputation for improving health. The activities that span the pure exhibition of total creativity and its appreciation are host to a range of intuitive and personalized metaphysical techniques that have proven benefits. Beyond therapy, art activates a deeper, existential principle which German philosopher Arthur Schopenhauer cleverly understood first among many of his intellectual successors as the "will to life." In the hands of such holistic thinkers as Julie Upmeyer, art has a mutual tendency to revitalize not only humanity, but also the immanent interrelationships between people, as the self-consciously predominant life form, and the planetary ecology.

AN AMERICAN IN ISTANBUL 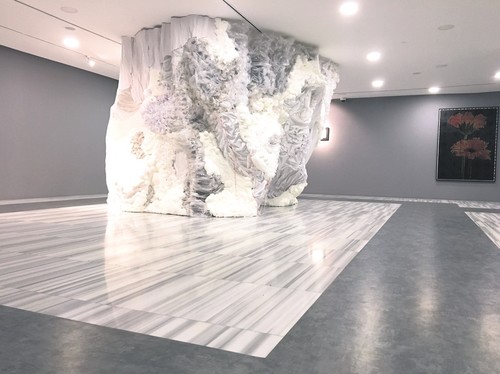 The sculpture "The Intruder" is the centerpiece at the exhibition, crafted by Upmeyer to speak to the aesthetics of waste as a commentary on the future of materalism in art.

During the infamous year of 2016 as the Turkish nation reeled in the wake of multiple historic tragedies, Upmeyer questioned the relevance of her art practice in Turkey, where she had by then called home for 10 years. Originally from Detroit, she studied ceramics in Michigan before expatriating to travel throughout Asia and Europe as an artist. Together with Anne Weshinskey, she founded Caravansarai Art Space in Karaköy, where, from 2010 to 2014, they invited local and international artists to the Tan Han building by the waterfront hardware district.

Upmeyer makes a cheerful, energetic impression given to her vagabond soul as she exhales light-hearted genius through impromptu theoretical disquisitions. Every aspect of her work is aglow with the spark of original insight into various transformations of the postmodern materialist paradigm. Largely excavated from the intensive urbanization of Istanbul's ecology, she elucidates with an infectious and undiminished fascination beside her works. The running theme of the current exhibition at Operation Room, on display until Dec. 9, is to consider the infinite in the finite, and the finite in the infinite. From that concept, she chose "in-finite" as the comprehensive, poetically-charged title. 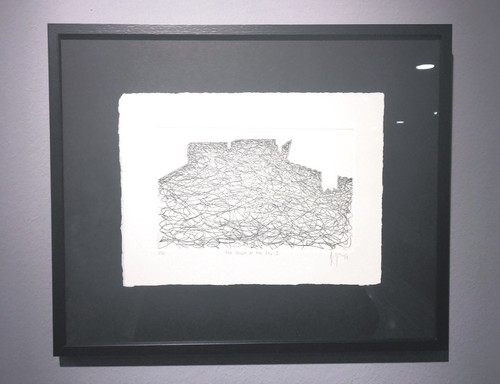 The electro-etching piece "The Shape of the Sky" was chosen by Operation Room director Ilg›n Deniz Akselo€lu.

During her past three summers at home in Istanbul before she became a new mother, Upmeyer would while away her spare time cross-stitching. Only, she did it her way, over custom-ordered industrial floor mats mostly intended as weather-resistant buffers for dirt-caked boots and the like. She saw flowers in them. And with her spectacularly ingenious knack for reinventing industrial material, she animated them as pixelated images. Skillfully composed with a strong, painterly sense of shadow and color, her series "the flowers" appears for the first time in a public exhibition at Operation Room. In dark greens, blues and grays, a most ephemeral manifestation of nature is rendered through the extremely durable plastic. To simultaneously craft a manual representation of digital photography while transforming the modern elements of hardware in beautiful, aesthetically-inventive floral designs is a stunning achievement.

The next most prolific series at "in-finite" is of five perplexing glass vases filled with various inorganic materials and placed atop a glimmering mirror polished by a highly specialized maintenance staff member from the American Hospital whose job is solely to make sure that every in-house glass surface shines. Upmeyer explained the ideas behind what she calls, "dimensional crisis / undertow" with her personable tact. Her inspiration derived from the inherent complication of creating 3D art in a world in which popular exposure to her work will mainly be consumed through the 2D media of shareable photography. In response, she took up the challenge to contravene apparent dimensional limitations. The series offers remote viewers an experience of three dimensions in two. Looking up from the impeccable reflection, the vases appear filled with vegetation and more diverse color schemes that recall natural abundance below the otherwise monochromatic papers and metals at the surfaces of the vase contents.

Operation Room typically publishes a fine art book for each exhibition, however, for "in-finite" they opted for a new model. After discussing ideas with Upmeyer, the choice was clear: "Infinity cubes." Only in Turkey, said Upmeyer with a knowing grin, as each of the 1,000 plexiglas cubes are individually enumerated and freely gifted. It's a feature that would likely be impossible for an exhibition to expense within the bounds of more affluent nations. As she attests, Turkish people have a can-do spirit, though with an attitude altogether refreshing from the conformist American exceptionalism that dominates with its culturally pervasive egotism. Upmeyer is privy to the welcome comforts of the outwardly foreign, which at times feel more hospitable than what is normally encountered through childhood nostalgia. She never returned to the U.S. after finishing school. Her work as a solo artist has taken her as far afield as Georgia, South Korea, India, Bulgaria, Sweden, Japan, Italy and more and onward as she plans to relocate from her base in Istanbul to Wales in the next year.

It took her 9 full days to finish the central piece to "in-finite." Utterly capturing the aesthetic drive of postmodern sculpture, she exudes the joy of creation while standing beside her piece that she has named "the intruder." Like an ageless stalagmite in a futuristic cave of waste it sits wedged between the floor and ceiling of Operation Room, bordered by a strip of cheap laminate flooring that she added to mingle effectively with the oppressive, vague austerity of the sterile, hospital ambiance as it leads outdoors. In a tangle of corrugated plastics, insulation foam, paper, tape, bags and other indiscernible components of scrap, "intruder" is the quintessential manifestation of the "in-finite" concept, to visualize the shape and presence of industrial, urban materials that are practically indestructible yet at the forefront of the habitual waste dependency that is as inimical to the greater society as it is unprecedented for all life.

Ilgın Deniz Akseloğlu specifically chose to show a piece of electro-etching by Upmeyer titled "the shape of the sky 1." It lucidly objectifies the atmosphere, effecting a powerful dialogue with the ecological scope of "in-finite." Akseloğlu sees art as integral to a practical understanding of social ecology to reform anthropocentric healthcare. To many scientists, the 12,000 years of geological time known as the Holocene Era has ended. Humanity is poise

d at the beginning of an age defined by its own devices. Evidence to identify the contemporary age as Anthropocene gains more traction with each year, most recently at the International Geological Congress in 2016 where many experts proved that people have single-handedly and irreversibly altered geological time. From the essential realization that human will united has an undivided influence over creation, the latest generation of contemporary artists are transcending the boundaries of materialism to envision a creative afterlife beyond the often grimly anticipated future.