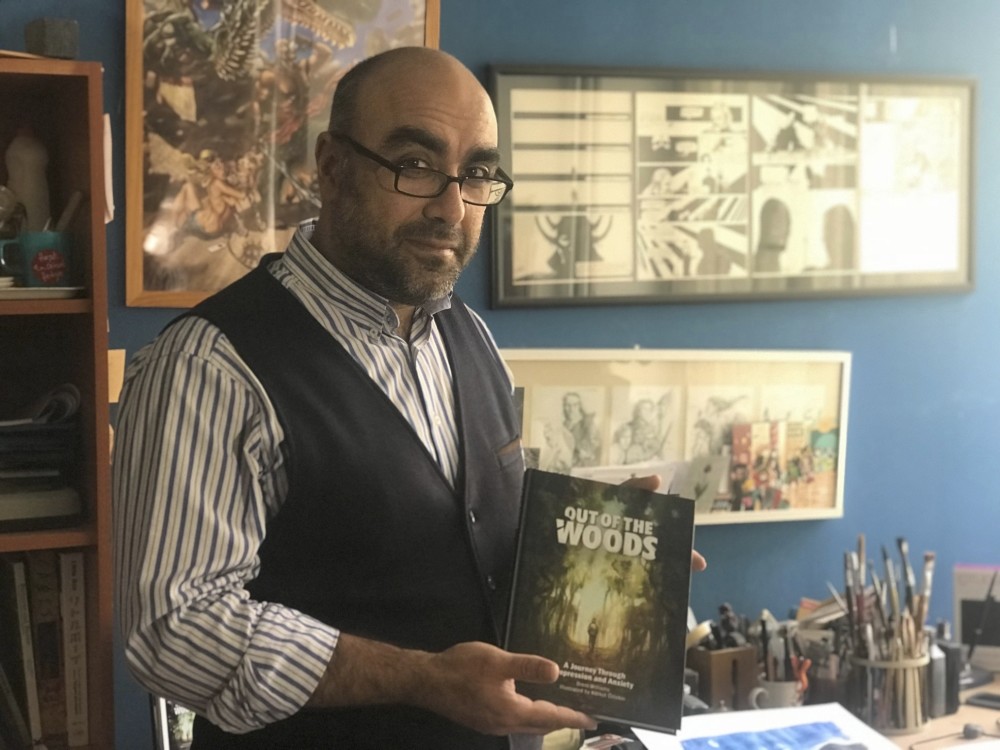 Mehmet Korkut u00d6ztekin completed the illustrations of ,Out of the Woods,, which is a depression and anxiety story adapted from the life story of Brent Williams from New Zealand.
by Anadolu Agency Dec 08, 2017 12:00 am

Having gained fame with his comics of the semi-human semi-robot RoboCop, Turkish illustrator Mehmet Korkut Öztekin has entered the world sales list with his new international project, "Out of the Woods."

Mehmet Korkut Öztekin, an assistant professor at the Graphic Design Department of Dokuz Eylül University's (DEÜ) Fine Arts Faculty, completed the illustrations of "Out of the Woods," which is a depression and anxiety story adapted from the life story of Brent Williams from New Zealand.

The book, which was completed with watercolor painting in three years, gained the right to enter the archive of the Cartoon Museum in London, drawing attention on online platforms.

Speaking to Anadolu Agency (AA), Öztekin said he illustrated RoboCop's "Last Stand" series after he worked with English director, author and painting artist Clive Barker on the Hellraiser Project. He said he received good feedback from the different countries around the world with his work.

He said he was invited to several comic book festivals and got the opportunity to work together with important figures in the sector.

"Students from different countries wrote papers and theses about me. My interviews took place in international magazines. I have received very good reactions from all around the world. What amazes me and makes me feel honored are the positive reactions," he said.

Öztekin said Brent Williams offered him a chance to illustrate the story he wrote about depression through the internet.

"We completed this project in three-and-a-half years together through e-mails. Williams wrote about the depression and anxiety he faced over his life," the illustrator said.

"He designed it as a kind of self-help book and presented his own life as a model. He talks about the behaviors of people who experience depression and their relatives in the book," he explained.

"It was published in New Zealand on Sept. 27 and after that it also started to be sold internationally. The main sale platform was Amazon.com and a deal was made with a marketing company. It was presented for sale in Europe, North Africa, the Far East, Japan, China, Hong Kong and North America," he said.

The assistant professor also talked about the fact that the book was on the top of the lists for the bestselling graphic novels and mangas, the bestselling biographic and historical comics and the bestselling anxiety and phobia books on Amazon.com. He also added that it will be offered for sale in Turkish in 2018.

Projects about these lands

Öztekin said he was very pleased with not only having the privilege of being an academic but also the opportunity to choose the projects that he wants, adding that he has refused some projects that he was offered from foreign countries. Highlighting that he aims to continue with more prestigious works, he said, "My next aim is to work alone, not with a foreign partner. I want to make something about these lands and its history."