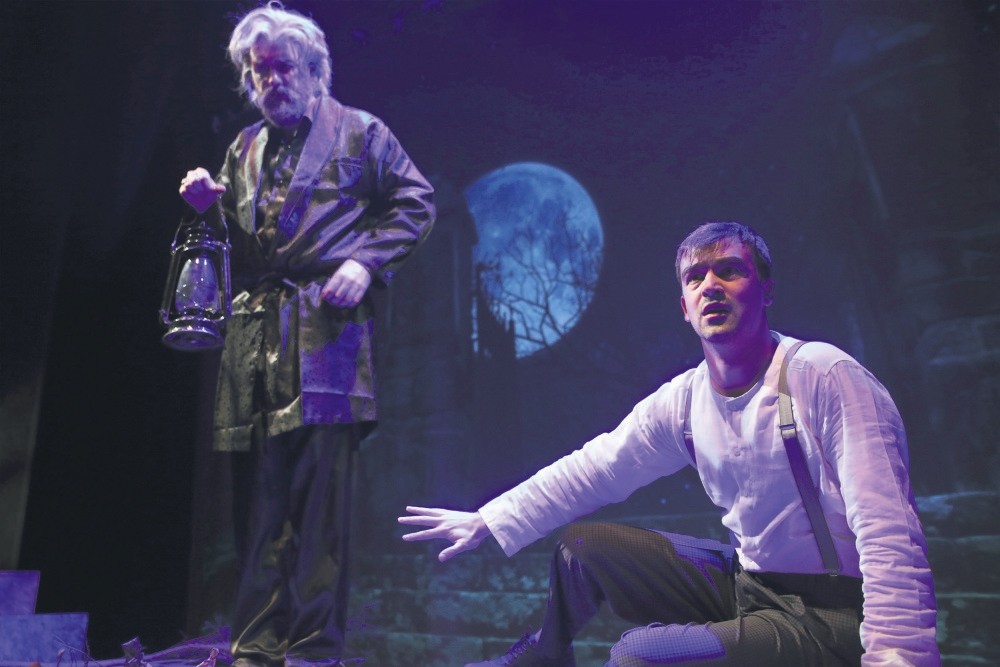 An adaptation of Italian author Giovanni Papini's novel, "Gog," awaits its audiences at various stages of the Istanbul Metropolitan Municipality throughout the season.

"Gog" is the diary of a madman in a mental asylum. It focuses on the adventure of a fool trying to escape from his own rudeness and the wilderness within himself.

"Gog" is a novel that sets off from the idea that only boredom and depression can accompany humankind, who never learns the right way of doing things in this world, and at the same time, feeding from opposing views and contradictory ideas. It also teaches how to question while thinking and manages to offer a ground for a critique of the modern times and modern humanity.

In the book, Papini hurriedly introduces Gog, who has lost his way in the world, to the readers. We follow him as we read on and believe that we will arrive at a plain, and all losses will come to an end. However, Gog cannot get rid of delusions and mishaps, which leaves the reader within a grey dread, all alone standing on the edge of a deep cliff. Right then and there, the reader starts criticizing Gog, as we all know that people learn by experience and every life has its own unique reality. While speaking to politicians, artists and scientists of the 19th and 20th century, Gog also learns many of their secrets. While it is not certain if these match the real-life facts, the secrets revealed are like a confession of the small yet heavy and deep burdens we all carry inside.

Gog approaches many philosophers with a bit of admiration and a little bit of fury, but mostly with hatred. This is because they both give hope to Gog, but then turn them into nightmares. We also go through many ups and downs through wealth and poverty, hope and hopelessness, and boredom and peace throughout the novel. And we know that his staggering in life is nothing more than a bold expression of our own downfalls.

Theater professional and art director Mustafa Odabaşı said about the play: "Boredom falls not just on Gog, but the modern man, who pampers their ego, does not listen to anything else but the voices in their heads and who waits to be flattered, consoled and spoilt like a little whiny child. 'Gog' shines a mirror on today's, and even tomorrow's men. 'Gog,' while contributing to the audiences' personal history, takes them to a deserted island from the cave they got lost in throughout the whole adventure. Readers, who will find other depths whenever they re-read the book, will turn into audiences who will discover something new every time they re-watch the play."

Italian journalist, author, poet and literary critique Giovanni Papini was born in Florence, Italy in 1881. He studied at Instituto di Studi Superiori and founded the magazine titled "II Leonardo" in 1903, thus introducing philosophers such as Kierkegaard, Peirce, Nietzsche and Santayana to Italy.

"Daily Tragedy" (II Tragico Quotidiano), "The Fall of Philosophers" (II Crepuscolo dei Filosofi), "Blind Plot" (II Pilota Cieco) and his autobiopraphy "A Man Broken Down" (Un Uomo Finito) are some of his most renowned early works. Then, "The Story of Christ" (Storia di Cristo), a testimony to his conversion to Christianity, became his masterpiece and has been translated into many languages all around the world. Papini lost his life in 1956 and while he is a gone-and-forgotten author now, he is an aggressive and marginal pen, who warns mankind and does not refrain from predicting the future.

It is still a topic of discussion whether he is a dreamer, a literary man or a dream interpreter telling historical facts.

While "Gog" might be recognized by few people even though it can be described as a classic, mostly due to the changes of courses in Pappini's life, his paradoxes and mental breakdowns.

Papini returned to Catholicism, which he always stood against, after many years and his life changed with fascism, which started flourishing in the depressed Italy of the 1920s. Papini was almost punished by being forgotten by intellectual circles as he drifted in the wind that first swept Italy with Mussolini and then the whole of Europe.

When World War II ended and as things changed in Europe, Papini became the first name dropped off by many from their lists as if he was forced to go back to his bitter loneliness of his first childhood years that cannot be recalled, yet, this does not protect him from being deemed as the "Dante of prose."

The two volumes of Papini's novel, "Gog" were published 20 years apart, first in 1931 and then in 1951, and were translated into Turkish in 1958 and 1966. The second volume of the book is more stagnant than the first.

The novel starts with the "masterpieces of literature" section. "Gog," in this section, turns works such as "The Iliad," "The Divine Comedy," "Don Quixote," "Orlando Furioso," "Hamlet," Gulliver's Travels," "Candide," "Faust, "Madame Bovary," and "Thus Spoke Zarathustra" and "Crime and Punishment" into single-sentence parodies. The reader finds themselves in satire and humor and starts accompanying a rich man who is bored and who does not enjoy anything in his search for peace.

However, Gog soon gets tired and frustrated from searching for his own reality. Time passes, yet the boredom and a depression that haunts his existence never ends. Suddenly, the readers start asking the questions that he cannot answer. The rich but brutal and rude Gog, who turns a blind eye to his reality, is probably the only reason to his tantrums and delirium.

When Gog narrates the extraordinary traditions of the places he has traveled to, he has an internal debate with himself. All of his new hopes turn into a black book with even a darker destiny because Gog has to carry this destiny on his shoulder, while hating and despising people. He speaks with many on his journey but he is always on his own, as he is lonely and this journey is nothing more than a journey of a man through the desert of loneliness.

Gog tries to run away from the burden, depression and tantrums by trying to comprehend humans, objects, science, art and literature while the reader questions and criticizes him, which may be deemed as the major success of the novel.

While locations, months and dates are provided in the book, there is no certain date to when such events took place. "Gog" has harmonized sarcasm and humor and mocked many things, and although it has been alienated from many circles, it remains as a marginal text.

One piece of the puzzle remains missing while the readers try to comprehend Gog's psychology throughout the novel. What keeps the pace of the novel up is the struggle to discover this missing peace. The reader, who could not find an answer to "why" until the end of the novel, will be able to find the answer at the play.

"Gog" brings together people we cannot see in real life, people who we think we know and then, turns into a visual feast that re-introduces them to us with different faces. The play based on the book tries to decipher the real truth and the mystery behind the script of the novel, yet, it does not sacrifice the reality of human existence.

The play reminds viewers that we are all mortals in this world and tries to keep them awake and questions the meaning of existence through Gog, who dreams of a new life. The characters tell their own personal stories, yet they all intersect and challenge literature, science, theater, art, music and beauty, which makes the viewer contemplate about their own lives.

The play looks for solutions while it explores beyond the boredom of Gog. Gog's depression, which is always there when he watches the sky, talks and even when he's gulping, is finally resolved in this play with a logical ending. We witness how he is tamed throughout the game and we also wander on the borders of madness.