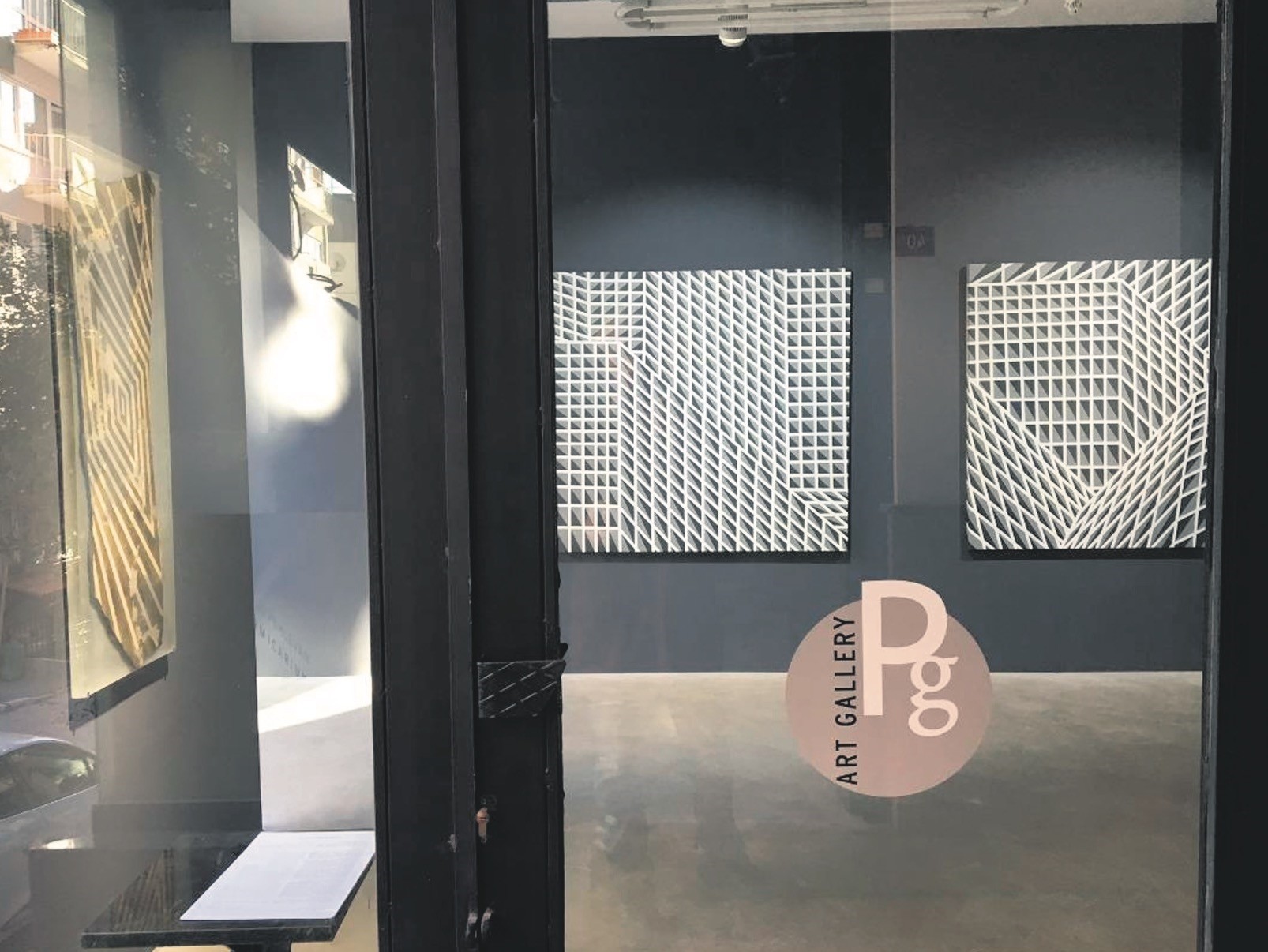 Approaching its 25th year, Pg Art Gallery moved around the corner from Boğazkesen Avenue, which leads to Istanbul's core pedestrian mall. Now, in the stylish and historic district of Çukurcuma, its current exhibit of mixed-media works by op-art painter Hasan Pehlevan unearths the demolition aesthetic

As a young street artist, Hasan Pehlevan first worked out of his imagination in the timeworn public spheres of Diyarbakır, a notoriously turbulent city in the Anatolian southeast. Surrounded by some of the most significant architectural remnants of UNESCO-enshrined world heritage, his creative roots naturally went very deep, as he confidently sowed his aspirations into the foundations of his hometown where the second-longest complete ancient wall defines the greater historical cityscape. Only the Great Wall of China surpasses the Roman-built Diyarbakır Fortress.

In his art and his life, Pehlevan remains deeply aware of the relationship that people form with local environments over time. As is endemic to modernity, the temporal construct of an environment is often altered permanently in instants of utter and brutal transformation. He owes certain aesthetic debts to a spectacular range of sources, from French archaeologist Albert Louis Gabriel to Hungarian painter and fellow proponent of op-art Viktor Vasarely, one of the founders of the movement that provokes the idea that visual illusions can influence thought patterns and potentially even change behavior.

Pırıl Güleşçi Arıkonmaz named Pg Art Gallery after herself when she founded it in 2003, opening in Bebek to introduce much of the world and her beloved country to contemporary Turkish art through participation in international art fairs and by working mainly with established artists based abroad. In the last 10 years, the Bosporus port district of Tophane reconnected Pg Art Gallery with downtown vitality, especially as the neighboring communities of Karaköy and Cihangir took off into the stratospheres of global youth culture with the strength of a third-generation espresso. To celebrate year 25, the gallery will publish a book to highlight its illustrious and noteworthy collections. The bright and personable Esengül Çelik has directed Pg Art Gallery for the last six years with a keen appreciation for socially-engaged work. In the wake of political instability in 2016, the gallery moved only a short walk around the corner from a previously more visible thoroughfare where boatloads of tourists would disembark at the shorefront nearby for a jaunt uphill to the famed Istiklal Avenue. It is a good day now if Pg Art Gallery receives up to a hundred passersby, and although it is not comparable to the heydays, the exhibitions are no less responsive to the latest appetites for new art. For his fourth solo exhibition in Istanbul, Pehlevan titled a collection of his recent works "Formicarium" after the Latin for "ant habitat" as an allegory for modernist housing development. In the subtext of his pieces on display, at Pg Art Gallery until Dec. 15, the year 1932 is a recurring nexus of contemplation for Pehlevan as it is for his native Diyarbakır. It was during that time when Albert Louis Gabriel placed the relatively obscure academic discipline of archaeology on the popular front of city planning. His simple act of civil disobedience to protect the walls of the Diyarbakır Fortress echoes down the halls of history as emblematic of a moment that spoke for the local people in the name of cultural integrity, and with a force arguably comparable to the activism of journalist Jane Jacobs.

In New York City in the 1960s, Jacobs, also a foreign national, preserved culturally-rich downtown neighborhoods with similar tact. Gabriel and Jacobs were up against an intellectual and engineering syndrome that continues to infect cities and countries everywhere. The phenomenon is glaringly unmistakable in the neighborhood of Fikirtepe, a dense collage of skyscrapers on the Anatolian side of Istanbul. It is an apt muse for Formicarium being at the heart of the unfathomably gargantuan urban sprawl that looks as unbelievable in its disorienting immensity as even a rough number of the city's population, which is currently around 14.8 million.

It is a reality that Pehlevan knows intimately in a variety of manifestations, as he witnessed its persistence beyond the early decades of the Turkish Republic as a youth in Diyarbakır and sees it through into the postmodern capitalist frenzy of Istanbul's latest incarnation, rising beyond cloud cover on the Asian horizon. Its easterly direction from the core of the great transcontinental metropolis points to Anatolia, where internally displaced and economic migrants perpetually arrive in search of opportunity, and in the case of Pehlevan, for a fine arts education. His powerful originality poses the narratives of modernity as the bases for collective reflection, and with an active thoughtfulness that is dreamlike in its penetrative force. That is ultimately the essence of op-art, known by its full title as optical illusion art, to effect what the French poet Arthur Rimbaud called, "a rational disordering of all the senses."

The Function of New Op-Art

Pehlevan innovates painting techniques to have the double illusion of digital art precision while entrancing the eye into enlightening states of selfless absorption. The two canvases at Formicarium visible from the street outside Pg Art Gallery stretch over the tastefully curated frames for a minimalist touch contrasted with the deceptive complexity of the black-and-white patterns conveying an immoveable residental cluster. With his partner, Seval Pehlevan and artist Seçkin Pirim, he produced a pivotal series of mixed-media works integrating epoxy to render a restorative quality to the building materials that he used and preserved in the mutual process of his interventionist art-making. He cleverly executed his concept as a direct interaction with the demolition of the premodern cityscape.

In a documentary video designed collaboratively with photographer Baran Bulut and his longtime friend Deniz Aktaş, who continues to work with the nonprofit, independent art space, Loading, in Diyarbakır's rarefied gallery scene, Pehlevan searches through the rubble of the Fikirtepe urban renewal projects that have incessantly blasted the foundations of east Istanbul from 2014 to 2017 with no foreseeable end. He flips over pieces of concrete and gathers together assemblages of the walls that he painted when the former infrastructure stood amid the amassing groundswell of high-rises on all sides. Bulut and Sedat Akdoğan photographed Pehlevan's artworks before they were recovered from the ruins that made way for a modernist urban planning strategy as formulaic worldwide as it is locally controversial. Brushing geometric intersections of black lines over meticulously patterned strips of tape, Pehlevan crafts op-art with a sharp and refreshing eye, one vital enough to make his Turkish predecessors of the movement proud, such as the late Ismail Altınok.

For a future work in progress, he drew inspiration from a fresco motif in an Armenian church in Diyarbakır that was converted into a mosque. Its fresco was evidently covered over in the process, however, Pehlevan managed to give it new life with his talent for optical illusion in paint, as he redesigned the antique aesthetic with an altogether novel quality. The image that he created is as unforgettable as its source material is timeless. In person, Pehlevan has the distinct character of an unassuming genius with his talent for fusing street art and gallery exhibitions with a critical social commentary. As is visible in his art and throughout his creative processes, he has a special weakness for the unseen, the lost and the unrecognized. With an abundant clarity and exacting focus, his work exposes the artifice of history. More, his art awakens the subtle though perceivable uninterruptedness of contemporary life, despite the total, inhuman destruction of the inhabited environment. In his practice, he instills the optimism and courage to look straight through the puzzling pieces of what remains of creation.