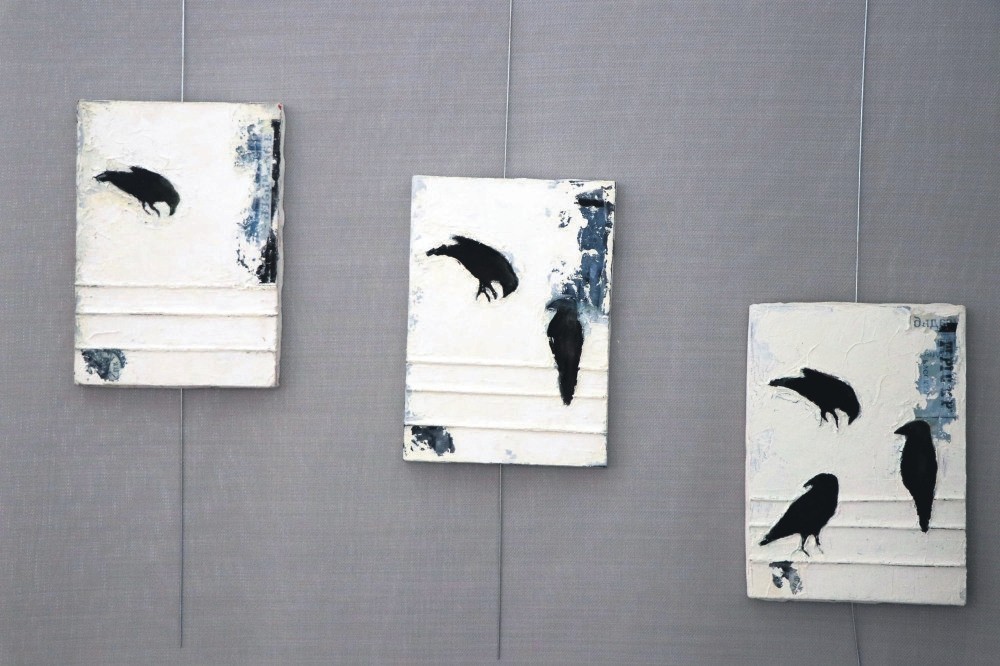 Associate professor Aylin Beyoğlu of the Department of Fine Arts Education at Trakya University's Faculty of Education focuses on crows in her latest exhibition.

Beyoğlu's "The Guide and Theories, exhibition on crows, which are known for their long lives and ability to act as guides to humanity through experience and the wisdom.

For her latest exhibition, Beyoğlu says that despite the Turkish saying, if your guide is a crow, then you will never weather the storm, crows are good guides for people. "I wanted to argue against this Turkish idiom - an equivalent of the blind leading the blind in English - and tried to depict the intelligence and noble nature of crows," Beyoğlu said.

All 33 oil paintings at the exhibition at the Devecihan Culture Center contain images of crows, which have been depicted in her previous paintings along with other animal figures. Beyoğlu has opened nine oil painting exhibitions of fish, bats and crows based on real data from nature since 2007.

"The Guide and Theories" is like a sequel to "The Diary of a Guide," opened by the artist in 2015. According to Beyoğlu, who said that the concept of a guide is one of her favorite themes since guides are leaders that set examples for society and that she believes in the wisdom of crows despite the negative connotation they have in Turkey. "I've been opening exhibitions since 2007. My first exhibition was "Eastern Data," which also included crows, but my exhibitions after 2010 mostly focused on the wisdom and guidance of crows," Beyoğlu said.

She said that people mostly ask her about the Turkish idiom. The writings in Latin titled "guide and without an identity," were another matter of concern as people wanted to know why these writings are included in the exhibition. "These writings depict what goes on in people's minds under social pressure. These writings, which are sometimes lost during the exhibition and sometimes the opposite, are right on the paintings as the full text," Beyoğlu said. Beyoğlu added that since crows can live up to a few decades, they have a lot of experience and become wise, and as such can guide people. "They have done many studies on these animals for science as well, which all prove my point, and I believe such a smart animal and one that can live for so long would make an excellent guide," Beyoğlu said.