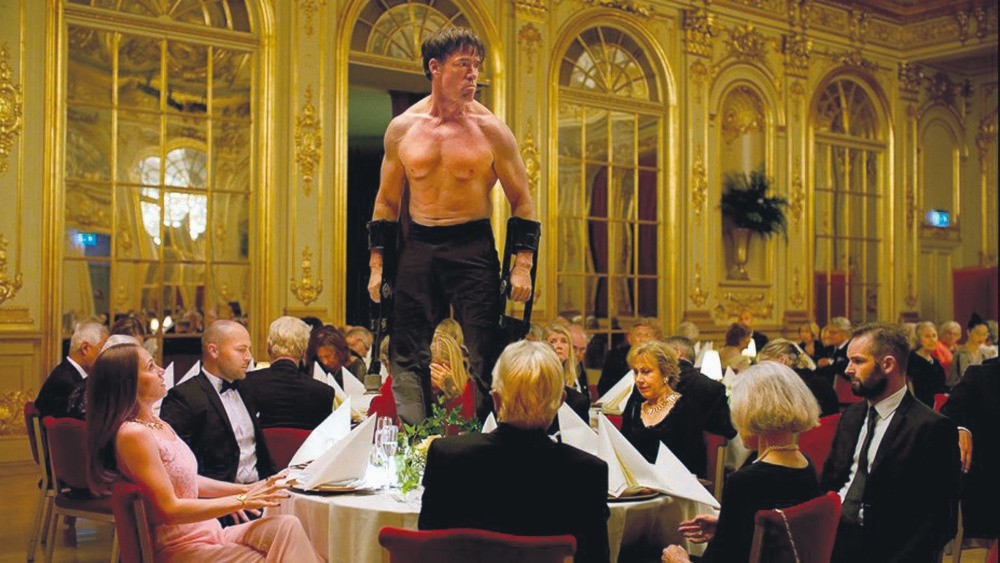 A performance artist acting like an ape, selected to entertain the art-savvy, elegantly dressed public sitting in a very ornate dining hall, tests the boundaries of what the polite audience will endure in order not to break the totem of modern art.
by Nagihan Haliloğlu Dec 26, 2017 12:00 am

Ruben Östlund's film 'The Square' is an anatomy of the modern art world that shows the relationship between museums, artists, donors and advertising companies, posing the eternal question of the meaning and uses of art, and how relevant it may or may not be to ordinary people's lives

Early in "The Square," there is an interview between two adults and the chemistry between them is palpable on the screen. The beautifully curated reporter Anne asks the handsomely curated curator: "What are the biggest challenges in running a museum?" The museum in question is a modern art museum, that institution we love to criticize and in many cases love to hate. Ruben Östlund's film follows the question of the functions of the modern art museum and modern art exhibitions or performances. Is the art market, modern or classical, anything other than another market where the filthy rich park their money for future trading in other, less savory commerce? Are we all that surprised that a Saudi prince may not know what to do with his extra cash and invests it in one of these objects that can hold so much more money than they are worth?

The curator of these very clear lines, very Swedish, very modern art museum, Christian, is more or less the protagonist of the film, and he seems to be very well aware of these questions as he tries to mount an exhibition containing an installation that is just a square. This square is supposed to represent a safe space, and there is a lofty and short description to go with it. Muslim viewers will immediately draw parallels with, maybe not the square, but the cube at the center of their worship and their relationship with the earth. Designating an area as a sanctuary goes back a long way as a religious practice, and the square at the center of this film about modern art seems to support the idea that modern art is supposed to be the new religious experience for an atheist liberal elite. 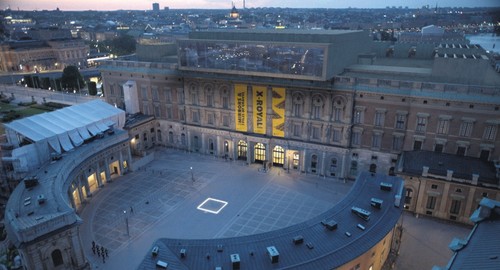 The square is supposed to represent a safe space in the front yard of a modern art museum.

The film offers an entry point for the director, and so the viewer, to a world that they may not be associated with, assuming that anyone who does not in some way associate with that world will actually go to see the film. We see that the always immaculately turned out Christian is so wedded to his job that he sometimes spends the night in his office. He is a relatively good father who looks after his daughters (some) weekends and has very enhanced flirting skills that would pass the non-harassment test. When the chemistry between him and Anne reaches its natural end, we see his insularity in all its splendor: He tries to hold on to a bit of himself, which he either thinks will be used against him or will be made to yield interest without his consent. Elizabeth Moss, known from "The Handmaid's Tale," plays Anne, adding extra frisson to this uneasy exchange.

We see Östlund slowly chip away at the protected layering that Christian, the everyman liberal elite, has put on himself. As he is advocating for the exhibition of an artwork through the sanctuary message it conveys, he finds himself on the street at the center of a quarrel where he has to act like a sanctuary himself. By the end of this incident - or this exquisite piece of "performance art" where boundaries of reality and acting are tested both for Christian and the audience - his wallet and phone are stolen, and we see him asking random strangers whether he can use their phone. The running gag in the film is that Christian does not carry any cash, and he makes a point of saying this to beggars who ask for money. Cash, of course, is the great connector of all classes, possibly too promiscuous a connector for Christian to carry in his pocket. Östlund stresses Christian's insularity in small and big ways, and just as Christian feels he has been able to shut out the world's aesthetic and economic failures, we see him drawn into it by strange circumstance, or by the hand of God, if you will.

This moment of playing sanctuary sets in motion a series of events that take the film from its polite criticism of the art world premise to a darker, almost Haneke-like place, when Christian gets involved with the inhabitants of an apartment building. It is the sort of packed apartment building with small flats whose residents he would normally have no contact with. But, Östlund says in the film, these people who will never visit any of his art shows claim his attention to the point of distraction even when they have already left the story. In an attempt to get in touch with one of the more recalcitrant inhabitants of the apartment block - a young boy who, with his bravura and the way he speaks I was convinced was Turkish, but credits tells me his name is Elijandro Edouard - Christian finds himself in the garbage dump one rainy night to recover a piece of paper with a phone number on it. It is a beautiful scene, with Christian going through the colorful plastic trash bags of his own, much wealthier apartment block, contrasting with the spruce, sparsely decorated and peopled places he spends his life in. Here is a moment when Christian seems to be repenting for all the times he has shut the world out, now having to get to know people through their refuse, covered in muck.

Though much of "The Square" poses fundamental questions about modern art, Östlund cannot help using the by now tired anecdote of a cleaner who vacuums up part of an art work, piles of rubble that I am pretty sure I have seen versions of at the Istanbul biennale. However, there are enough scenes that explore the complacency of the art world in radical ways. We see Dominic West with his Neanderthal jaw as a very smug artist basically in his pajamas, explaining his work when a man with a severe disability derails his interview. We then move on to the scene that is depicted in the poster - a performance artist acting like an ape. His act has been selected to entertain the art-savvy, elegantly dressed public sitting in a very ornate looking dining hall. The performer tests the boundaries of what this polite audience will endure in order not to break the totem of modern art, which they, by pouring their money into as an investment, have helped reach such sacred status. All art, one can argue, is a dare, and Östlund explores how much artistic license we are prepared to give the artist. We are, again, in Haneke territory, violence teetering at the edge of polite society, always looking for a way in, and in this instance making its way through a representation of what many in that chic salon believe to be man's ancestors, or at least, cousins.

As such, "The Square" makes a good sequel to Östlund's 2014 film "Force Majeur," as he continues to catalogue human reaction to atavistic moments of danger and fear, and how the animalistic reactions we try to keep under wraps surface in critical moments.