Having developed a passion for calligraphy when she was 9 years old and having produced her very first work in her mid-30s, Şefika Ülker trains female calligraphers in the workshop she opened with her own means in Kocaeli province.

Calligrapher and illuminator Ülker, now 41, has been maintaining her passion for calligraphy, which started when she was deeply affected by the writings at a mosque when she was a child, at her workshop for seven years.

Gaining recognition for her work, which she also decorates with illuminations, she tries to introduce calligraphy and transfer it to the next generations by training female calligraphers.

Besides her younger students, Ülker said she teaches people who are anywhere between 37 and 74 years old.

Ülker told Anadolu Agency (AA) that her passion for calligraphy started after she was influenced by the writings of Hasan Çelebi in a mosque. Ülker said she met master Mahmut Şahin 12 years ago and was introduced to illumination then.

'God created you so that you can write' 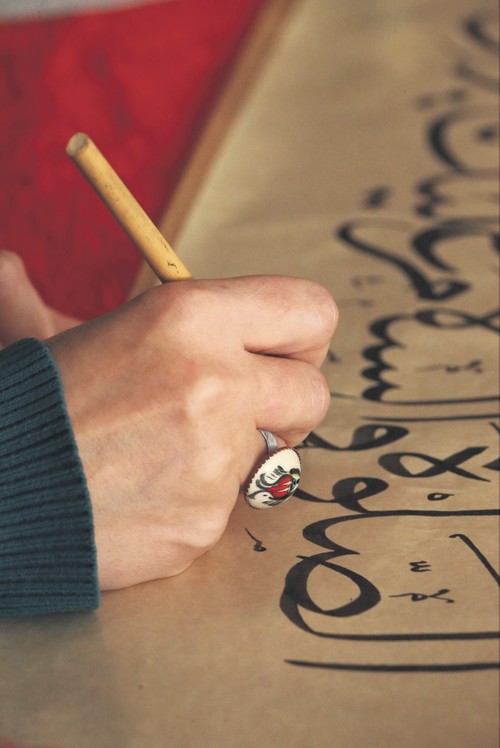 When Ülker showed her first calligraphy piece, her teacher asked her whether she had tried it before or not.

Describing this memory, she said: "I said that I had never tried it before, but had waited for 20 years. I prayed to God first and then started to write Ottoman anthems. My teacher told me that God created me so that I can write. Then, my calligraphy continued with illumination in later years. I was a student for three years and then started to teach in my fourth year."

'I tried to manage something as a female calligrapher'
​
Ülker explained that she yearned for this art for 20 years.

As calligraphy requires patience, she said: "I was writing even at nights. I sometimes brought my work to my teacher, sleeping only for two hours. I produced my work like this. I always wrote, but also protected art with calligraphy. I saw art as a whole, and calligraphy was a center of art. Then, I started to do illumination as I spread to the environment from this center. I improved myself and now I want to train my students in the same way."

Ülker said that she and her husband established an art house seven years ago and then a foundation. Noting many artists train at the workshops with their support, she also talked about the difficulties that women face in calligraphy. "Female calligraphers were signing their work with male pen names. I also thought about that. Should I use another name or should I use only my surname? I sign my pieces using my name Şefika. My mentor approved it. I ratified two of my female students. Now, I have four more students deserving ratification. I tried to manage something as a female calligrapher. My aim is to receive God's approval and practice calligraphy correctly," she said.