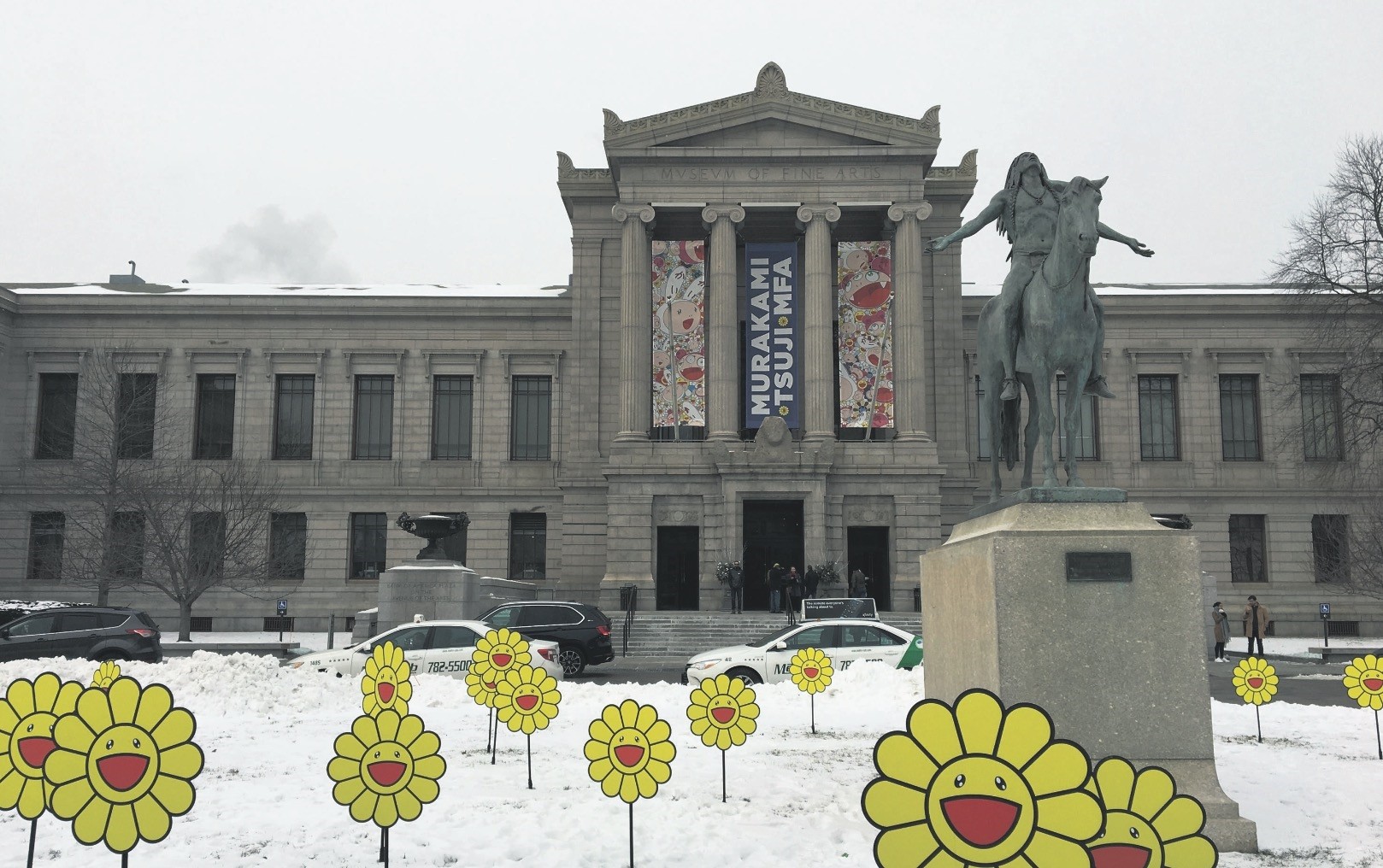 The world-renowned legacy of the Mardin-born Armenian-Canadian portrait photographer Yousuf Karsh continues beyond the subtle illuminations of his striking artistry thanks to the current efforts of his wife, Estrellita, for the ‘Follow the North Star' exhibition at the Museum of Fine Arts in Boston

The burly mug of Churchill on the wartime front, the hardened visage of Hemingway in his Cuban refuge and the timeless face of Einstein from his Princeton days are among the countless historic luminaries whose portraits have been immortalized with poetic justice under the studious eye of Yousuf Karsh. In silvery shades of black and white, his distinctive photographs convey the penetrating stares and lines of character that have shaped the personalities and impressions of great 20th century world leaders. From the most introspective artists to the freest revolutionaries, a soundless, though blaring call to universal humanism shines through the celluloid prints that bear his ingenious signature aesthetic. 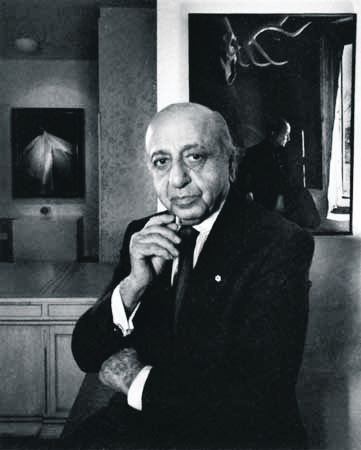 In 1976, Yousuf Karsh photographed Kenojuak Ashevak, an Inuit artist who rose to international fame not long after the first indigenous artist cooperatives cropped up around Cape Dorset and the high Canadian north. Described as a "tiny lady" by the photographer's wife Estrellita Karsh, who took special interest in Inuit culture, Ashevak steered her gaze away from the lens with a reserved poise, clasping her hands together as they disappear under the fur-lined cuffs of her traditional Arctic garb. Her work is at the forefront of the exhibition "Follow the North Star" on display at the Museum of Fine Arts (MFA) in Boston, the city where the young and ambitious Yousuf Karsh began as an apprentice photographer to John Garo in the late 1920s. Its lead piece is a mythopoetic self-portrait that Ashevak created to reimagine herself in the incarnation of a curiously familiar, wide-eyed owl. It is her stonecut and stencil "Summer Owl" (1975), which she made at the West Baffin Eskimo Co-op in Nunavut.

After nearly four decades residing in the Canadian capital of Ottawa, where Yousuf Karsh found his most enduring sense of home alongside Estrellita, the Children's Hospital of Eastern Ontario began outreach services to Nunavut in 1998, a year before the region became its own territory. Inuktitut is the official language for some 15,000 local children who make up almost half of the population. Within the opulent maze of priceless MFA curations, "Follow the North Star" welcomes its host culture in Iniktitut within the neoclassical Gothic Revival building on the Avenue of the Arts in the core of Boston's historic downtown districts. The 24 pieces from the Karsh collection that comprise the exhibition are suffused with the immemorial qualities of Inuit art, beautifully preserving time-honored cultural motifs that emerge into light with an innocent magic. The rudimentary colors and earthy techniques in the works appear as if out of the dream of a lost and blessed child alone with the spirit of nature, sharing in the mystic bliss of living, mutable creation. 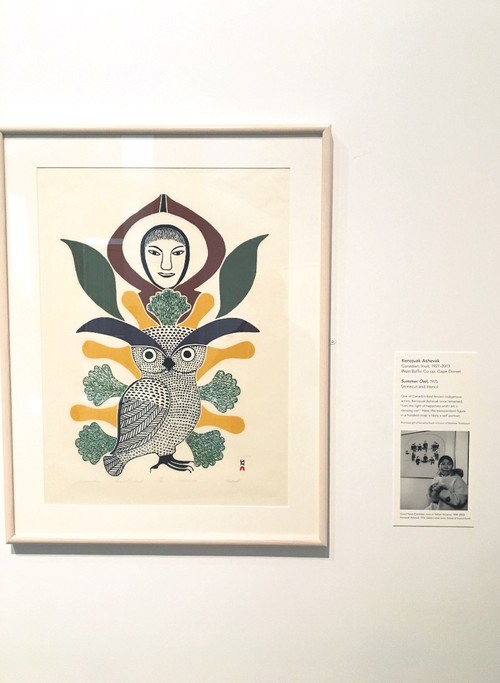 "Summer Owl" (1975) by Kenojuak Ashevak is the lead piece of the exhibition as she is one of the best known Inuit artists.

With spiritualized ecological sentiments of the ageless Inuit aesthetic well-envisioned in the stonecut piece, "Journey through a Dream" (1973) by Lucy Qinnuayuak, picturing a diverse group of giant birds as they lead a weary sailboat team behind a lone shaman kayaker safely to shore. Such lithographic, geologically-driven mediums printed from the rare and sacred rock of the permafrost-covered Arctic facilitate the minimalist, supernatural edge that is essential to carving out what the comparative mythologist Joseph Campbell professed as the concept of "elementary ideas" first proposed by the father of American anthropology, Adolf Bastian. In the scholarship that culminated only after thorough and inspired exposure to Inuit art, among other aesthetic crafts by a range of indigenous people spanning the planet, the literature that Campbell and Bastian advanced for such successors as the ethnographer Franz Boas and later the sculptor James Houston identifies key psychological components that discern individuality and collectivism in human expression. That creative tension is crucial to an appreciation of Inuit art where its folk elements bridge strong stylistic and technical commonalities between artists and communities.

Inuit art remains confidently seated in its peculiar, localized movements of folkloric and mythic contemporary art, honed with the intensively disciplinarian traditionalism born of harsh northern survivalism. Each brilliantly collected and tastefully curated piece in the "Follow the North Star" exhibition reveals the infinite enigma of artistic novelty and its recurring power as a force of metamorphosis capable of altering linearity and rationalism toward the opening of a mind for cyclicality and the paranormal. Uniquely cultivated, creative talents from the Arctic have never ceased grasping for the emptiness within where new potential inspires dedicated seers to become visionaries and finally artists. These individuals by virtue of entertaining the polar muses speak in the natural language of that superhuman environment, in the transmogrifying shapes of its lands and skies, and the ebullient enchantments of its animals and spirits. 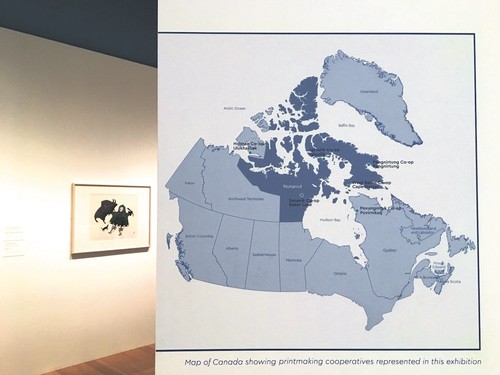 Yousuf Karsh returned to the Arctic in 1979 to photograph Jessie Oonark, a self-styled Inuit witch from the Sanavik Co-op on Baker Lake in Nunavut. Her pursed lips, tightly etched face and dark, burning pupils enlighten the gelatin silver print of the film developed by Karsh, a man who traveled to the eternal heart of his time with a camera, sculpting stills from the shadows of his masterful direction of poses. And through his eye, she conveyed volumes and lifetimes of tales without the slightest twitch of her tongue. Her piece in "Follow the North Star" is a stencil titled "Pipe Dreams" made during the last year of her life in 1985. Its mind-bending, hallucinatory subject is a naive, prototypical op-art anthropomorphization of a merman inhaling from a pipe. In poetic inscriptions published with the exhibition, Estrellita demonstrates her intimate knowledge of the Inuit world with her astute appreciation for the role of the shaman, the ritual healer in Inuit societies, and the recurring symbolism of human-to-animal transformations as prompted by the absorption of a holy substance into the body.

The forays that Yousuf and Estrellita Karsh explored in the otherworldly realms of Inuit art represented the latest years in the working life of the photographer. In North America, he came to redefine modern portraiture. The year he photographed Jessie Oonark, he was better known for his work with Pope John Paul II and Andy Warhol. He had traveled to remote locales before to meet Georgia O'Keefe at her legendary desert recluse, to lean in close to capture the stress wrinkles of Fidel Castro and to evoke a candid moment of ease with King Faisal. It was in the painted visions of his Inuit countrymen and women of Canada where he refreshed his Armenian eyes and saw into the passion of his illiterate father, his educated mother and his family.

Despite the ongoing controversies related to the origin story of his ethnic territory, he lived his illustrious life as a proud Armenian. In later years, while often contemplating his maiden disembarkation as a teenage immigrant on the Atlantic coast, he never lost sight of his mentor John Garo who introduced him to the MFA in Boston, a place that would become a perennial resource for his work and influence. He taught Karsh to observe the subjects of his portraits with an acute eye and to use his faculty of memory as an integral part of his craft. In a similar light, Estrellita Karsh commemorated 150 years of the Canadian Confederation with "Follow the North Star" to rekindle the undying flame of creative reflection that Yousuf Karsh lit in Boston during his earliest years as an aspiring portraitist.