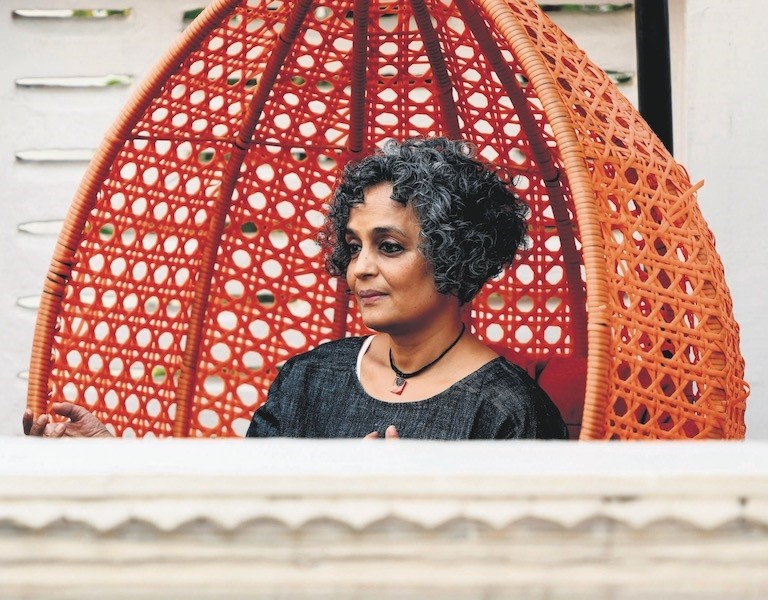 She may have returned to publishing fiction after a two-decade hiatus, but Indian writer Arundhati Roy says she has no plans to sheath her polemical sword anytime soon in a world where the vulnerable are still being ‘smashed'

Sitting in a cafe in the bowels of Old Delhi's labyrinthine streets on a chilly winter's afternoon, the 56-year-old Indian writer Arundhati Roy still simmers with the kind of fiery political rhetoric that has made her one of her homeland's harshest modern-day critics.

"I would find it very hard to live with myself in this country if I didn't talk about what was going on," she says.

"Not only in India but all over the world, an economic system is being created that is driving people apart," she adds. "I'm writing about how this system is actually smashing up the vulnerable in this country."

Roy has spent much of the year publicizing her new novel - "The Ministry of Utmost Happiness" - a sprawling and lavish tale published in June.

But inevitably conversations stray onto the kind of political issues she is now equally well known for: Kashmir, Maoist insurgents, environmental activism and the rising communal tensions in modern-day India.

The novelist and the polemicist is a duality she has worn for 20 years and she's not going to stop now. The new book's dedication after all reads: "To, The Unconsoled."

After years of struggling to find her voice, penning television and movie screenplays in Mumbai, the daughter of a Syrian Christian from Kerala and a Hindu Bengali burst onto the scene in 1997 with her debut novel "The God of Small Things."

The story of twins Rahel and Estha and their traumatic childhood in Kerala was a publishing sensation, selling more than 6 million copies worldwide, scooping up the Booker Prize and turning Roy somewhat uncomfortably into a darling of the global literary set.

Many favorably compared her at the time to South Asia heavyweight writers like Vikram Seth. But those hoping for a swift series of fiction follow-ups were disappointed.

Instead she turned herself into something resembling India's moral conscience, churning out essays on a broad range of topics that riled the country's elite and - when it came to her harsh criticism of India's treatment of Kashmir - even earned her a sedition charge.

"I get into so much trouble so many times and I keep promising myself I won't write another [essay]," she explains. "But it comes from a place where just keeping quiet just doesn't seem to be an option."

Her essays, she says, are written with a "kind of pacy restlessness".

But the new novel afforded her an opportunity to write more cautiously and slowly.

"When I write fiction I'm the exact opposite. I'm just completely relaxed, completely take my time."

Started some 10 years ago, "The Ministry of Utmost Happiness" absorbs many of the leftist political subjects she has written about, forming "part of the foundation" of the book.

Among the vast cast are Maoist guerrillas and Hindu nationalist mobs and a love story set against the backdrop of the Kashmir's long-simmering insurgency.

Compared to her widely-acclaimed debut, the reviews for her belated follow-up are more mixed, with some saying the work is long and chaotic.

It is a criticism Roy partially accepts, but brushes off.

"I know a lot of people describe it as chaos, but that chaos is constructed," she explains.

She expects her readers to spend time exploring the new book.

"It's looking at the story as though it's a big city like Delhi," she says. "You can't really just read 'The Ministry of Utmost Happiness,' you have to get to know it, like you get to know a city: Walk through big roads, small roads, courtyards, barren places."

Politics comes fairly easily to Roy, but fiction less so.

"It took me a lot of time to recover from 'The God of Small Things,'" she admits. "Not just because of the worldly success, but to write something that I dredged up from some place that was quite deep."

It is unlikely she will shelve her polemical pen anytime soon.

"There are mobs running around wanting to burn down cinema halls, there are mobs of huge mustachioed men celebrating sati," she fumes, referencing the historical but extinct tradition where a widow would throw herself onto her husband's funeral pyre.

Critics of Roy's essays say they can be hysterical and narcissistic. But Roy is unrepentant, seeing herself as a much-needed canary in the coal mine.