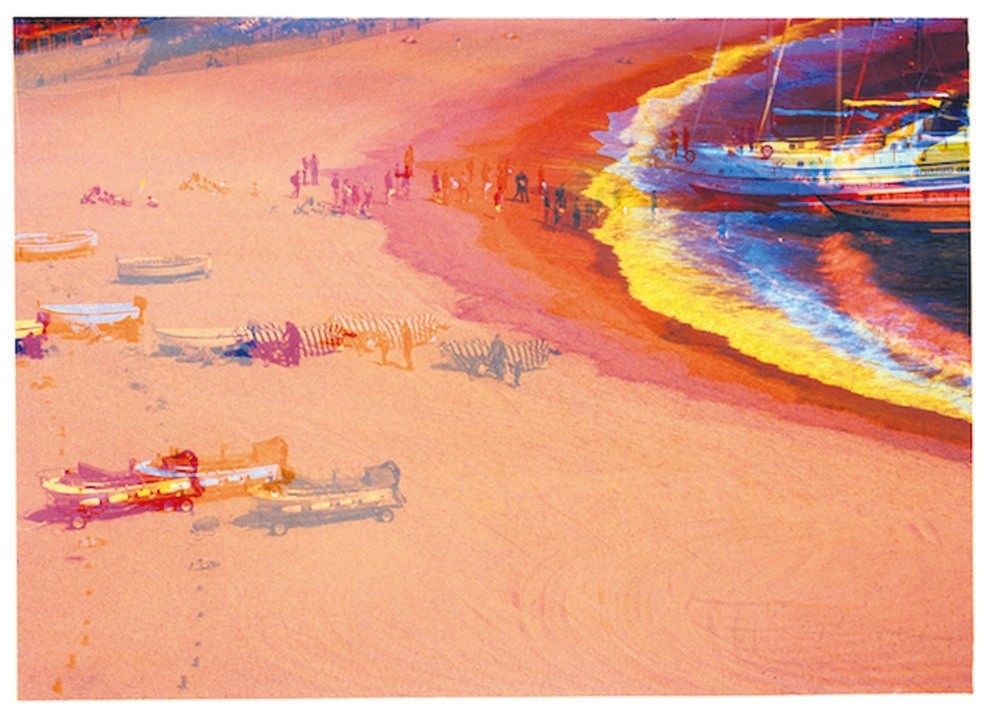 In Art Sumer's new exhibition, ‘A Place Where Light Casts Many Enigmatic Shadows,' work by young artists Pinelopi Gerasimou and Blanca Vinas ask the question what it means to experiment with analog photography today

Before it was discovered by the Instagram crowd, Karaköy was an interesting district: silent coffee shops, small galleries showing interesting work, empty streets where surprises could still be found. Nowadays the double forces of gentrification and capitalism has made the neighborhood as crowded and distasteful as certain sections of the Kadıköy and Beşiktaş districts: the main aim seems to be selling cheap booze to students in kitsch surroundings, and that sensation of discovery is long gone.

However, recently four galleries, Pi Artworks, Galeri Nev, Mixer and Art Sümer returned to Karaköy, and prospects of going back to better times emerged. Entering the building on Mumhane Street that houses the galleries lifts the spirits. On a recent weekday, I visited Art Sümer, on the second floor, and was impressed by "A Place Where Light Casts Many Enigmatic Shadows," the gallery's latest show that features works by Pinelopi Gerasimou and Blanca Vinas.

Gerasimou, a 29 year old artist from Athens, has studied at the International Centre of Photography in New York.

"Pinelopi Gerasimou's work pays tribute to what looks like a life outside of what we have been socialized to do over thousands of years of constructing civilization to settle in groups," Basim Magdy, the curator of the exhibition, explains.

"In solitude, her subjects look like renegades from an ancient historical cult, burdened with uncertainty and the vulnerability of their journey. Each one of them is either blurred, camouflaged or non-existent. Their power lies in the details of their hiding." 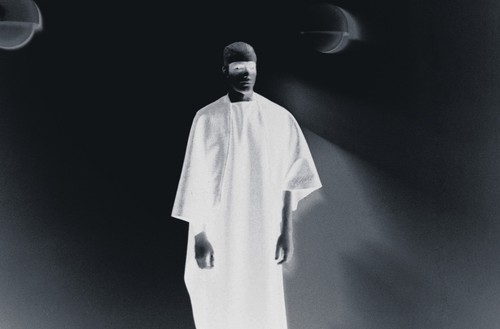 Blanca Vinas is similarly interested in those strategies of camouflage. Born in 1987, Vinas is a Barcelona-based artist and a graduate of the graphic design department at Escola Massana Centre d'Art i Disseny in Barcelona. In her work, Vinas disturbs our idea of place.

"One of the starting points for the show was to look at the way a younger generation of artists uses analogue photography in a manner that is more invested in experimenting with a rich tool than with its rich history itself," Magdy said in an interview last week.

"Photography has evolved immensely in the last 10 years with the expansion of social media and a specific widespread understanding that it has made popular of what a good image looks like. The work of Gerasimou and Vinas stands somewhere in between the history of film photography and the world we live in today. One of the other things that struck me about the two artists' work is that apart from the technical and conceptual differences, at times they both seem to be looking at similar subjects - Vinas photographs the larger zoomed out picture while Gerasimou zooms in on the details."

Those color-filtered images of the world are unsettling, and Vinas seems to be aware of it. In one image, four men stand up together in a state of anticipation. Their shapes and colors are copied into other shapes and colors: Vinas plays with the image, interferes with the colors, and the resultant image is one that excites the imagination.

In another work, "Triple Landing," color again plays a defining role. "Here colorful men and women wheel their inflatable boats out of a flaming sea, claiming a new territory of evolving questions," Magdy explains. "It is impossible to overlook the romanticism of their ant-like patterns on the shore in favor of the possibility of impending violence."

From a distance her work resembles abstract paintings: filled with geometric shapes and flashes of bright colors, they are collages of reality and imagination. A work from 2017,"Liquid Diamond", interrogates the aesthetic possibilities of the sea, and Magdy points to how "the geometry of light and shadow seems to take people by surprise as they enjoy the calm hypnosis of the sea, perhaps waiting for a new myth to arise." 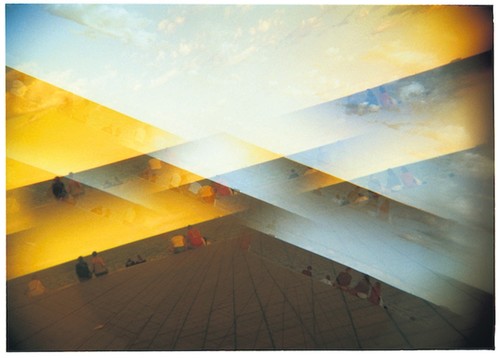 In 'Yellow is the Color of Ambivalence and Contradiction,' the gaze of people is overcast in an ominous fog that calls for the emergence of a savior." The hypnotic quality of those images is linked to the "enigmatic shadows" of the expression in the exhibition title.

"I came across the work of the two artists that I felt presented a fresh and different perspective to the way we see the world around us through their unique use of photography and their compelling understanding of its tools," Magdy said.

"My decision to curate a show was not influenced by a desire to curate, but by my enthusiasm about the work of Pinelopi Gerasimou and Blanca Vinas and my interest in presenting it to a new audience and giving them the exposure their work deserves. Light and shadow constitute our understanding of color. They give objects their three-dimensionality and give meaning to their movement. They are the main essentials to composing any photograph. They both capture moments that are hard to define, making it impossible to position them in particular situations or a time. There are very few clues to the circumstances surrounding them, leaving a lot of room for imagining the world that exists around them and the protagonists in them. Whether the protagonists are camouflaged in their surroundings, blurred, multiplied or photographed with colorful filters, ambiguity is always present. This is a quality I love about both artists' work - it's a very realistic way of representing the world. In real life, things are mostly undefined and constantly changing."

Exhibiting works by Gerasimou and Vinas have produced an enigmatic dynamism, one that leads viewers into questioning possibilities of analog photography. This is what Magdy points to in his exhibition text, where he writes about how those two young artists stretch what it means to experiment with this type of photography.

"They capture the thrill of being alive in ambiguous compositions and colors; the representational magic inherent within the smooth movement of light between objects and people to sculpt growing and receding meanings and shadows. The work of Gerasimou and Vinas composes strange poetry about people and the terrains they cover in their lifetimes."

And he writes beautifully about how their works level "time, archeology, solitude, beaches, geometry, abstraction, and landscapes without beginnings or ends like bricks on top of one another in beautifully fragile visual structures."

Among those fragile visual structures, I was particularly impressed by small groups of people and their boats who populate "Triple Landing." As I looked at the beach, beaten by yellow, blue and red waves, a possibility that those figures may belong to different historical eras emerged. It is as if the filter that unsettles our sense of color could also be applied to time. The result of this filtering of image and time is a sensation of wonder.

Another work, "Other Mind's Archive," shows Gerasimou's command of black and white photography.

"In 'Other Mind's Archive', a man's shadow is lighter than the color of the wall it has fallen upon; like a ghost he stares at us with haunting sword-sharp eyes," Magdy writes.

Another black and white image shows a falling man; he is floating and seems happy to do so. But for Magdy, another work by Gerasimou is even more characteristic of the artist's work.

"In 'I Disappear Here,' 2014, an unidentifiable person arrives at the critical point of finding direction on a narrow trail. Surrounded by a vast dry landscape, the person's unintentional camouflage mirrors a possible attempt to evade decision-making. Gerasimou's poetic photographs' approach to detail is like an archeological dig. They slowly unfold into playgrounds for hypothetical scenarios."

But how can the medium of photography embody the complex task of archeology, and explore details of our world and civilization in a way that does not lack nuance? Photography is thought of as a fixed form with a strict tie to reality: and yet "A Place Where Light Casts Many Enigmatic Shadows" shows this is not a fate, but perhaps an obstacle that artists can overcome by experimentation.

"None of the pieces in the show was commissioned, everything was selected from the wide array of work that both artists have produced in the last few years," Magdy said.

"The conceptual framework for the show started with a raw idea that was then enhanced by my conversation with the two artists. It was more of a collaboration in the sense that the artists' input, at least to me, is quite evident in the curatorial aspect of the show. This manifests in the way the two artists' pieces are mixed in the space. The most important aspect of the conceptual framework that guided my work on the show was to find a way to create poetry through the pieces in it, to instigate emotions and to show new meaning and beauty in the work."