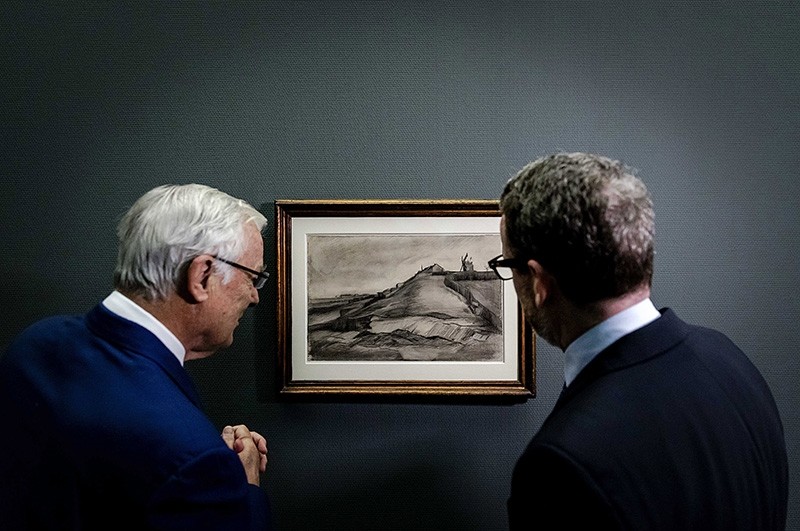 Art lovers are in for a rare treat as four forgotten works by Dutch masters Vincent van Gogh and 17th-century painter Govert Flinck have gone on display, after gathering dust for more than 100 years.

The works include a never-before-seen Van Gogh drawing, which had been in private hands until now.

Called "The Hill of Montmartre with Quarries", Van Gogh's monochrome artwork dates from 1886 when he was living in Antwerp and Paris, where he worked at the studio of leading French historical painter Fernand Cormon.

The sketch, together with a second drawing "The Hill of Montmartre," were unveiled Tuesday at an exhibition at the Singer Laren museum in central Netherlands.

"Such a discovery is always great. It's really exceptional and does not often happen," Teio Meedendorp, senior researcher for the Amsterdam-based Van Gogh Museum, told AFP.

Meanwhile, two previously forgotten works by Rembrandt's student Govert Flinck (1615-1660) were also revealed to the public at the Amsterdam Museum for the first time on Tuesday since disappearing around 1895.

The two portraits were only unearthed after their owner visited an exhibition of Flinck's work at the Amsterdam Museum.

For many years "Montmartre with Quarries" sat unnoticed in a private collection until it was brought to the Van Gogh Museum in 2013 for authentication, he explained.

"After it came in we verified that it was indeed a Van Gogh -- but we were intrigued by the question of its origins."

It had been sold into a private collection in 1917.

"We authenticated it in 2013, but it took a bit longer because it's up to the owner and not us to reveal the work," he added, saying "we had to keep it under wraps for a few years."

The sketch also gave the museum an opportunity to authenticate a second work in its possession, called "The Hill at Montmartre".

The type of stationery used in both sketches is identical and "nicely illustrates how he (Vincent) was still searching for his own style in the winter and spring of 1886," the Singer Laren museum said in a statement.

"It was a very nice investigation about a work that appeared out of nowhere. It was never published, never put on display," Meedendorp added.

Meanwhile, the Flincks were uncovered after the anonymous owner contacted the museum to offer the portraits for its current exhibition of the 17th-century master, who studied under Rembrandt but later developed his own style.

"The paintings were hung on their owner's living room walls when he contacted the Amsterdam Museum and asked if they'd be interested in seeing them," Dutch newspaper Trouw said.

Believed to be portraits of Zeeland province representative Johan de Mauregenault and his wife Petronella van Panhuysm, they were last described in an 1895 auction catalogue.

"Since then the paintings disappeared into thin air until now," the paper added.