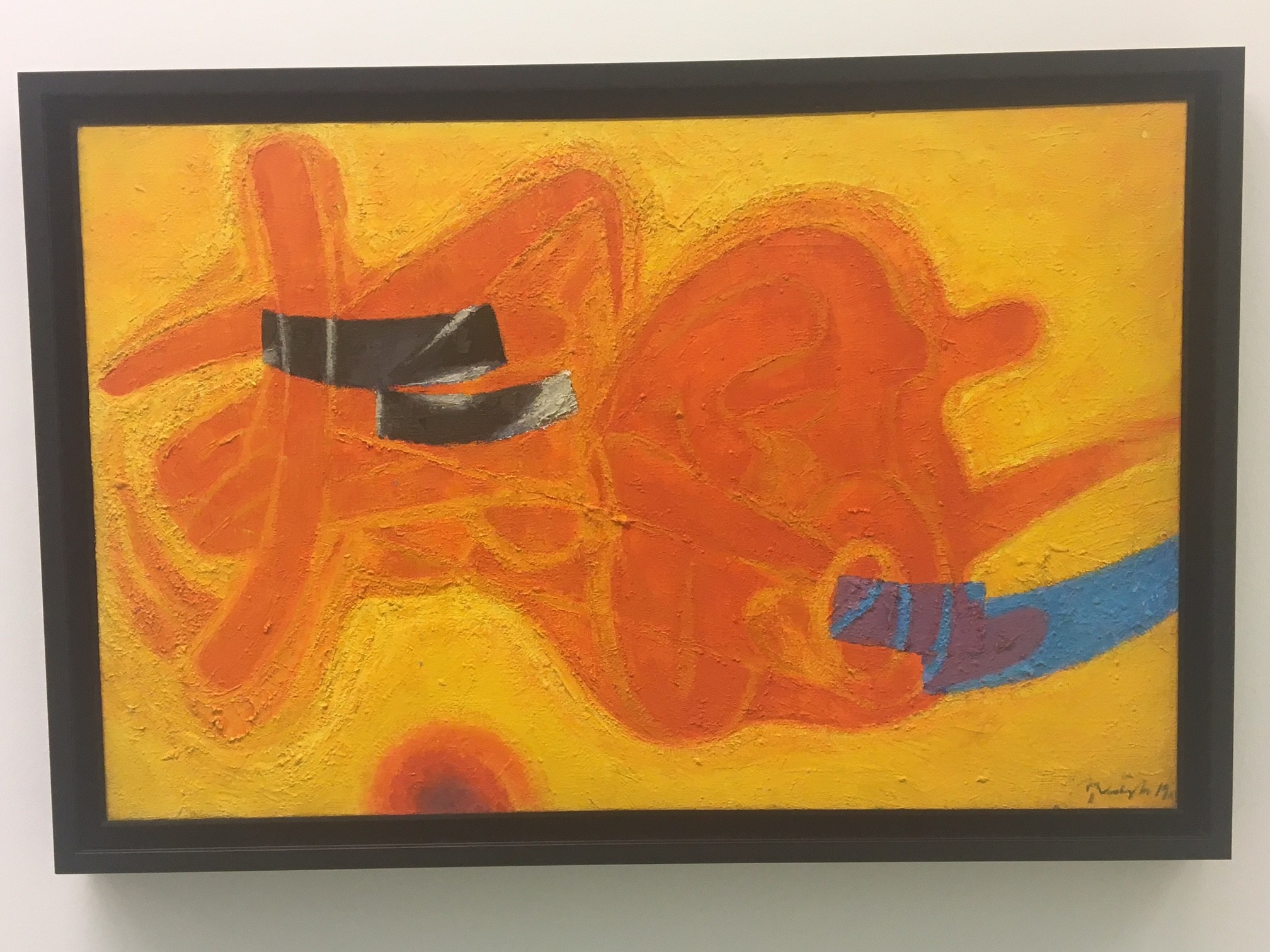 A few paces from the columned arches of Maçka Democracy Park, the second-floor gallery Dirimart welcomes with a peerless eye for modernist Turkish painting. Its current exhibition, ‘Creating the Moon Anew' by Âbidin Elderoğlu is part of a comprehensive archival project to revitalize his historic contribution

The regionally incomparable glitz of the European neighborhood of Nişantaşı is studded with all of the capitalist extravagance that defines Istanbul's wealthiest district. Almost every storefront is a chain. Extended families of Arabic-speaking shoppers are ubiquitous as they carry name brand bags with seemingly inexhaustible appetites for commercial wares untold. Turkish residents are dressed fashionably, appearing as out of the department store advertisements that stare at passersby whose heads look cemented to smartphones while ambling along its unusually wide sidewalks relative to the greater, ancient metropolis. Roma of all generations trudge through the crowded outdoor mall, clothed in loose-fitting shalwars and long earrings as they bear the burden of the utterly wasteful, globalized society, marching aside the economic elite with wheeled carts of litter.

At the prestigious address of 7 Abdi İpekçi Avenue, the gold-hued, second-floor window facade of Dirimart leads to its simple gallery interior, where the history of contemporary Turkish art is uniquely preserved with a formidable cultural significance, an aspect that would be understandably unsuspected with respect to most first impressions entering from its immediate environs. The previous exhibition at Dirimart prompted renewed and perennially vital interest in Bedri Rahmi Eyüboğlu, the painter and poet esteemed as the Picasso of Turkish art by the national arts intelligentsia. Earlier in its fastidiously keen programming, the space hosted another posthumous exhibition by the late visionary and transcendent master painter Deniz Bilgin.

Eyüboğlu was a contemporary of Âbidin Elderoğlu who lived most of his life in financial straits with a teaching post at the İzmir Teacher Training School, which was generally uninspiring and even draining. He became most creative during the last years of his life, which were spent in Ankara, the city where Bilgin partly received her education, and where she tragically jumped from a 10-story building in 1999, committing suicide at the untimely age of 43. In the Turkey of the 20th century, being a modern artist, especially taken with abstraction, was a hard choice fraught with impracticality. Until the 1950s, most of the Turkish citizenry lived hand to mouth, to subsist and survive the downturning waves of imperial dissolution and post-Kemalist reformation. It was not until he retired from academia when Elderoğlu finally advanced his artistic principles. His is an uncompromising example of self-determination for all to live with an authentic creative voice. 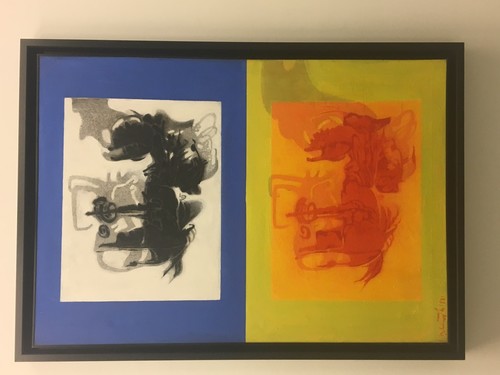 Elderoğlu impressed many of the works from the latest period in his life with recurring, abstract calligraphic signatures.

Dirimart director Ceren Erdem and Levent Özmen, the house artist liaison, curated "Creating the Moon Anew" to focus on the later years of Elderoğlu, mostly from 1969 to 1973, the year before his fated passing in the short span when he ultimately did realize his dream to live and work as a full-time artist. He had held on tightly to his aspirations since his days in the 1930s as a student at the famous Academie Julian, and in the studios of Albert Laurens and Andre Lhote in Paris. As lucidly explained by Özmen, the painters of Europe had developed techniques and styles, and even popular appreciation for abstract art initially and especially during the paradigm shifts of the era leading to World War I and in its aftermath. American exhibitions caught on soon after, however in Turkey, modernist expression in art remains a rarefied business in relation to global demand, only emphasizing the importance of its early adherents like Elderoğlu.

To public knowledge, the name Elderoğlu as a critical artist is still obscure, due in great measure to the fact that his paintings are, until now, only held for common viewing in the collections of the Istanbul Painting and Sculpture Museum, which has remained closed for the last nine years due to plans to relocate within the Galataport Project construction zone beside Istanbul Museum in the shorefront neighborhood of Tophane. Inside the offices at Dirimart, the tireless and insightful Levent Özmen is concluding work on a comprehensive book publication which will return the prescient Turkish modernism of Elderoğlu to the contemporary art map. In some 400 pages, the book launch will commemorate Elderoğlu's death anniversary on Feb. 12, when he left the world nearly half a century ago in 1974. It will mostly feature brilliant images of his life's work, often captured, as for the "Creating the Moon Anew" exhibition, by his brother-in-law and also a recognized photographer Ozan Sağdıç along with commentary by prominent Turkish art historian Ahmet Kamil Gören.

Dirimart acquired rights to private collections from the family estate of Elderoğlu to produce an entire archival excavation of his art. From Jan. 18 to March 18, 17 of his paintings will be on display for "Creating the Moon Anew." Its title piece is the only one explicitly named for the show, as Elderoğlu was not exactly moved by the linguistic dimension to the appreciation of his work. The approach is roughly shared by Mark Rothko, who sought to penetrate beyond name and genre, to see an artwork as independent of history and criticism toward an inner place of sheer, personal emotion. The concept, which the title expresses, draws from a method that Elderoğlu developed with an uncanny visual voice, that being to render the aesthetics and subjects of nature into abstract art. Although certainly challenging for the uneducated eye to discern pattern and any sense of real objectivity, his musical forms are far from arbitrary and random, and they are not improvised either.

As is clear from the sharp curation by Dimiart, his paintings, until the last year of his life, were shot through with a single current of artistic inquiry and practice. He employs bold aesthetic features such as to add foreground layers of color and form that contrast artificial designs with natural shapes. At first glance they appear altogether distinct from the rest of the painting yet are integrated skillfully. It is a technique reminiscent in the paintings of Syrian artist Ibrahim al Hassoun, whose work is exhibited in Istanbul from the collection of the Aleppo-founded Kelimat Gallery. Throughout his works, Elderoğlu advances a signature to his craft, which he stylizes with his particular ways of playing with recurrence and variation. For example, there are bodies of paint that give the impression of being purely abstract workings of raw emotive expression, when in fact they are exacting models, born of his indefinite imagination. In that way, his works question the repeatability of forms as is central to the pedestrian mentality of popular consumer society with its virtual infinity of identically manufactured items. Instead, he flips the coin and repeats visible abstractions inspired by his studied observations of the natural world. The shape of a mass-produced cup is tossed into the same world as that of a leafless, gnarled and solitary tree in the dead of winter.

In the mind of Elderoğlu, if the creator of the universe was an artist, they would produce abstract art. There is a subtle effect of individuation to perception that becomes clearer in the natural world, and for that reason modern people return to the forests and seas, deserts and wildernesses of the planet to return to themselves, to find where they begin, and end. From his careful brush, whether with watercolor on paper, or oil on burlap, Elderoğlu crystallizes the power and meaning of modern art as a means to what such seminal thinkers as William Blake and Aldous Huxley called cleansing "the doors of perception." With each stroke of post-calligraphic, Asemic writing, the art of Elderoğlu is a wordless book out of time, devoid of names, eternal and constantly urgent.