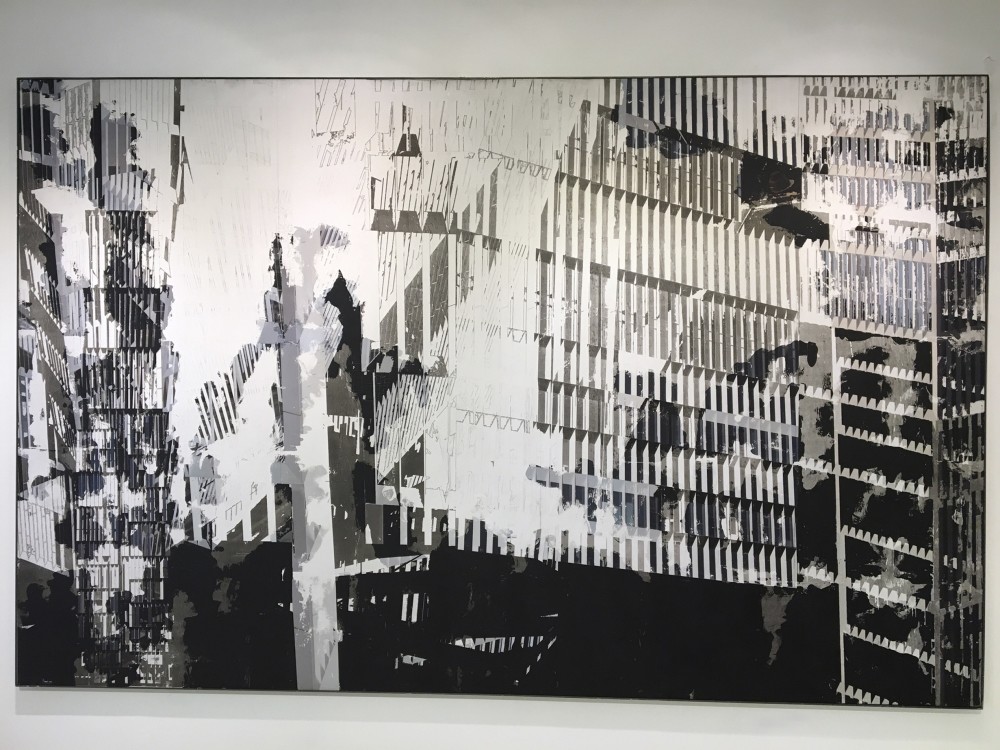 Balkan's ,Simulacrum, series makes up most of the pieces in his solo show where he unravels the asethetics of futurism.
by Matt Hanson Feb 02, 2018 12:00 am

Through steep, graffitied tangles of brick and metal, narrow slopes lead under the shadows of halved walls bristling with the overgrowth of old Istanbul amid the storied alleyways of İstiklal Avenue where the third-floor gallery Versus Art Project hosts Gökhan Balkan's solo exhibition, ‘The Third Nature'

The spacious, clean wooden desk of a gallerist is an inviting sight. Sleek computers are lit, if not open. Hot, caffeinated drinks are readily served, if not in hand. Fashionable curators are surrounded by high shelves stocked with large, colorful exhibition catalogues and art books bearing famous names alongside the more obscure whose inner circles demand that the inquisitive public take a closer look.

Conversations ensue in a heady, esoteric atmosphere conceivably similar to the exchanges between powerful magicians sharing delicate secrets. It is an air in which theories alternate between sides of the mind with a casual liberation from the norms of the street, where most concepts rarely touch ground, and where the flightiest whims of the artistic imagination are free to spread both wings and ascend tirelessly into the stratospheres of new thinking at the creative cusps of history and technology.

In a peaked frame of mind, Gökhan Balkan sat before Tuana Pulak, the assistant director at Versus Art Project and pontificated with an intensive focus on the theme of his solo exhibition, extrapolating broadly on the central motif behind its title, "The Third Nature." In a time-bending streak of cerebral discourse, he championed the ideological significance of his work with a mental charge comparable to the earth-shaking might of a wild stallion galloping at full speed over the psychological landscapes of the current paradigm, focusing ever so exactingly on the edge of the present.

His creations evoke the fragmented, distended and uncomfortable overlaps where the cyclical and linear patterns of existence spiral out from the decadence of anthropocentric evolution. He presages an age defined by the independently self-reproducing and intercommunicative artificial intelligences that people will foreseeably leave to a post-human earth made barren and lost to the potent blink of the sun, the saving rush of water, the lasting compass of wind, where only the rawest foundation of nature survives the turn of the epochal tide to renew its universal energy unchecked by a ravaging, dominant species.

Balkan is a serious intellect, as he lavishes his audience remotely through his art and expansively in person with generous doses of insight and knowledge, spanning everything from his critiques on Renaissance humanism to a detailed interpretation of the 16th century painting by Holbein the Younger, the famous oil on oak, "The Ambassadors." His musings on the writings of Immanuel Kant, Friedrich Hegel, Jacques Lacan, Slavoj Zizek and Ray Kurzweil are virtually boundless as he conveys the essence of his art as a fundamental inquiry into the definitions of reality and the mind.

His core terminology for his solo exhibition at Versus Art Project is ultimately fixed on an enumeration of the progressions of nature. For example, whereas "The First Nature" connotes the natural environment, and "The Second Nature" industrial construction, "The Third Nature" points to a shadowy realm only dissected by the boldest of futurist thinkers. To form his notions about an increasingly nonfictional simulacrum in which smart machines reproduce each other and create new languages without human intervention, he consistently returns to a momentous conversation held between Elon Musk and Mark Zuckerberg, the two leading global innovators whose names are household synonyms for the most advanced technological leaps in contemporary living.

"We think that this whole universe is created for human beings. It's very easy to think egocentric, or anthropocentric. Even in this AI discussion, we think it's dangerous for human beings, but maybe it's better for human evolution," says Balkan, as he sips his coffee in between effusive bouts of dialogue questioning the humanist basis of postmodern identity with an extraordinary capacity to reflect on the pervasion of intelligent technology among his peers. "When I say 'The Third Nature,' there can be a Fourth Nature, or Fifth or Sixth, there can be an infinite number of these Natures. If there are only two, that which is given and made, then we will think in a dual way. But when we say three or four the dualism is over."

"Anything that is unknown to us. Anything that we fear we cannot overcome, that we cannot fight, that might be stronger, we automatically think of destroying it or completely abandoning it," Pulak responds, smartly dressed and clearly well versed in the concepts of her current artist at Versus Art Project, as she prepared the entire gallery for Balkan's works that he had produced especially for the space for some eight months in 2017. "Up until this point, everything we have talked about is between 'The Second Nature' and 'The Third Nature,' but we have completely abandoned 'The First Nature,' which you call the truth, which is something that isn't formulated with culture, social norms or identity, but is something that exists before we are born when we are in the womb. Again, it is unknown."

With its leanings toward the expressly more subversive, spotlighting emerging perspectives while encompassing the world of international art fairs, Versus Art Project keeps an eye on empty zones of privation and erosion where art has a singular potency as a source of fresh creative energy. Drawing from such themes as identity loss, gender inequality, migrant displacement, and the bitter end of gentrification, the gallery embraces "The Third Nature" by Balkan for his peculiar attention to the "coincidentia oppositorum" of de/construction as provoked by the capitalist extremes of technocratic globalization, illustrating with his distinctive techniques the more sensitive areas of life today by exposing the utter vulnerability of being human in the face of bleak, robotic times. His works are aesthetically distinct in three sculptural pieces "huMAN PERIOD" "Illusion Zone," "Post Human / Anti-Identity" and in six series: Simulacrum, Self-Portrait, Flawed Relation, Ground, Breakthrough, Accumulation. 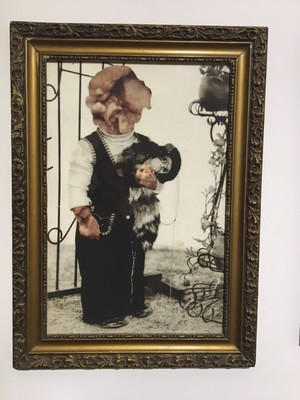 On entering Versus Art Project, upstairs from the old-fashioned Hanif Han building foyer below the architectural elaborations of its three-story bay window engraved with the date 1904, the Simulacrum Series is immediately apparent, comprised of five larger canvases and 24 smaller pieces, all of them the product of mixed techniques employing methods integrating chance causation through processes of image transfer. Balkan traveled to the Anatolian neighborhood of Kozyatağı in Istanbul's eastern outskirts for the series, first photographing hundreds of angles among the ubiquitous and uncountable high rises before transforming them into icons of the dystopian imagination befitting the literary persuasions of J.G. Ballard.

His pieces bear textural resonances in line with his philosophic decentralization from all that is anthropocentric in the manmade confines of modern realism and its manifestations as they are unceasingly erected in the glaring light of day. The nucleus of his visual proclamations gain three-dimensionality with Illusion Zone, a half-built construction project pieced together into an unlikely plastic collage of sheep bone and computer parts. 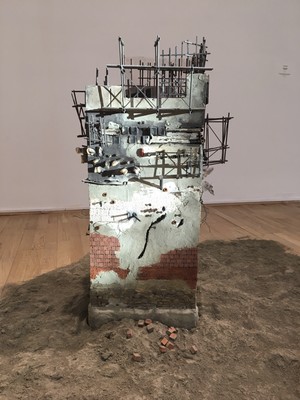 And with "huMAN PERIOD" he asserts having crystallized his artistic advocation with "The Third Nature." The figure of a man holds open the definitive industry book, "Architects' data" at a page that measures building proportion to the human body. Petrified with cracked plaster, it exudes the abstraction and futility of humankind striving against the reality of creation as it courses through a person, its ultimate subject in the process of remaking itself.

Much of "The Third Nature" is dense, difficult, even insufferable, as with the grotesque and disturbing Flawed Relation and Self Portrait series, yet in the Ground series Balkan offers a visual respite, however haunted by the concrete artifice of its natural facade, outwardly fated to total, post-human desertion.