Sanctuary of the mind: The evolutionary imagination of C.M. Kösemen 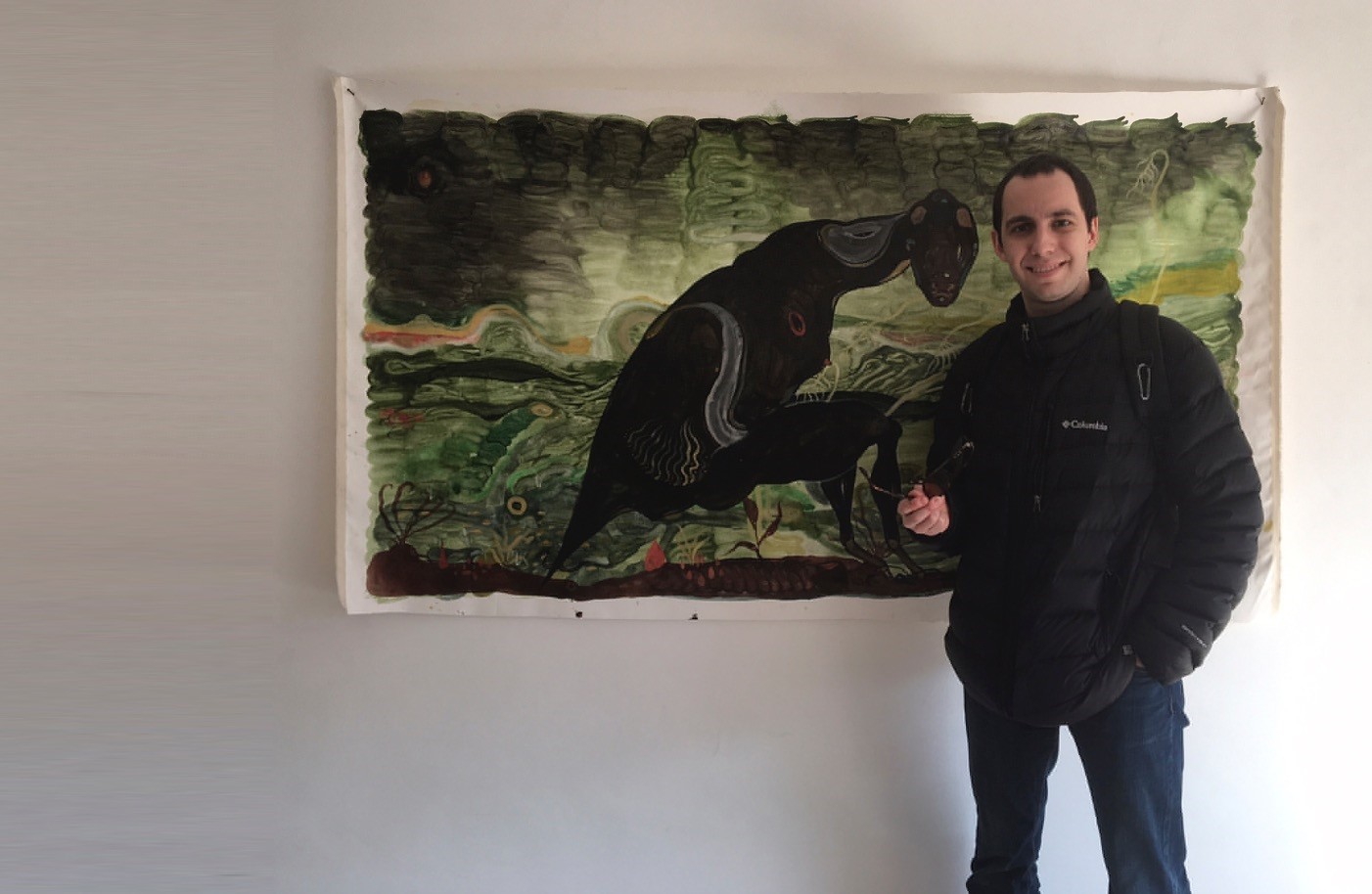 C.M. Ku00f6semen is a young and brilliant polymath artist, who is also a traveling lecturer and author of the book u201cOsman Hasan and the Tombstone Photographs of the Du00f6nmes.u201d
by Matt Hanson
Feb 05, 2018 12:00 am

Through the thin veins of alleys, the hip port district of Karaköy leads to Space Debris, an art space hosting exhibitions and events featuring sound installations and performance art. In collaboration with ‘The Empire Project,' its current exhibition ‘Sanctuary' by painter, writer and researcher C.M. Kösemen is on display until Feb. 17

True to its literal definition as the orbit of colliding bodies and unconscious forces encircling the planet out of sight and out of mind, artist and curator Seyhan Musaoğlu opened Space Debris in Karaköy four years ago in the wake of coincidences. In New York City, she pursued a fine arts education and formed an experimental sound group, dancing under choreographer Michael Clark at the 2012 Whitney Biennial with her friend Osmancan Yerebakan, a writer and curator based in New York. Later, he introduced her to Anıl Doğan, who would become the owner of Press Karaköy, the ground floor cafe below Space Debris. After years of artistic collaboration in New York City, the independent exhibition room that she founded in Istanbul still attracts fate.

Fast forward to the Jan. 18 opening of "Sanctuary" by the polymath C.M. Kösemen, who Musaoğlu never forgot as her fellow student at Koç School on the eastern edge of Istanbul's more verdant Anatolian country. He was a brazen outsider, an eyesore to some, simply a question mark to many, as he spent his off-hours facedown in the grass to examine bugs. His embryonic interest in entomology became a catalyst for his future life as an artist and researcher with astute and compulsive fascination in evolutionary biology as material for the otherworldly beings that he paints with exacting detail against progressively original palettes. His intellectual modesty shines through his personable sense of humor, as he snaps his trusty digital camera while discussing the substance and methods behind his scientific inquiries which inspired his "Sanctuary." 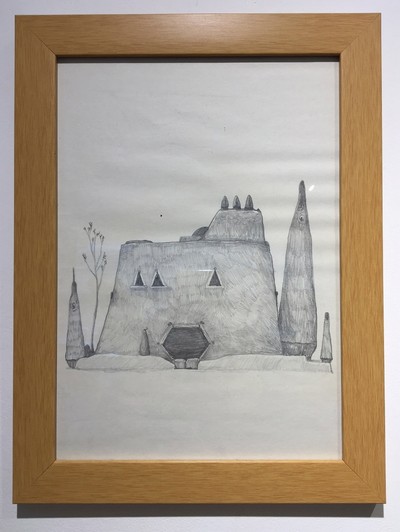 "I've been painting all my life and professionally for the last eight years having exhibitions on and off. From a young age I knew what I liked and what I wanted to be about. And that was worlds beyond our own, creatures and beings and settings that come straight out of the subconscious," Kösemen said, introducing himself and his work in broad strokes and sharp illustrations as he speaks with a candid ease punctuated by the kind of intermittent pauses that are characteristic of thinking persons. "Growing up, I was always and I'm still interested in the worlds of paleontology, evolutionary history, extinct animals, and basically the trigger was the ability to see strange creatures and strange worlds. If I could have a life experience that I constantly live for that would be it, to see strange new beings and worlds."

In 2010, Kösemen met Kerimcan Güleryüz of The Empire Project. His art would never be the same. Before their dialogues, Kösemen could identify a bone and from it draw the full body of the species impeccably, as a scientist might catalogue observations from the field. Güleryüz unleashed a creative liberation in Kösemen, prompting him to experiment with symbolism, to explore the depths of his mind without overthinking quality and realism. Kösemen remembers the experience of his inner revolution as a painter after meeting Güleryüz, likening it to the metaphor of turning on a rusty tap and waiting patiently as the sputtering liquid runs steady and clear.

"This exhibit represents for me the forming of a background and the forming of a world almost emerging from the fog, and you can see that most clearly in this large piece, 'Sitting Figure' [2017]. Beforehand I was always drawing these mythical, chimeric beings and they were all the creature itself on a white background or a lightly colored background, a bit like [Hantaris, 2017] the tall, greenish-yellow painting and that small painting [Reptilian, 2015] with the wizard and reptile," said Kösemen, while sitting atop the single desk inside Space Debris to survey his works naturally lit by a picture window looking out at the antique crosses and cracked bells of an old Turkish Orthodox church. "In the last year I felt that a world needed to come into being. Slowly but surely it did. Technically, it's me coming to grips with landscapes. Symbolically and mentally, it's the emergence of a world. As the title suggests, it's the reflection of a need to seek Sanctuary."

Kösemen previously exhibited at Space Debris in an experimental performance context for "Patron's Experiment" in 2015. An anonymous commission had him behind closed doors for four days under camera surveillance inside the gallery space while listening to an electronic dance number on repeat for four hours each day. It was a test of patience, character and skill. Kösemen walked away with a fat check proving that his art, like that of all authentic visionaries, is able to thrive in the midst of capitalist manufacturing and popular culture. It is arguably through such exchanges between trade and art when cities and communities evolve. Although creatives by vocation are generally deeply and often oppressively entangled in worldly commerce, the source and realization of the intuitive presence they cultivate within and to all through the mediums of free expression are born of self-determination, unconstrained and even stimulated by the impositions of moneyed power and cultural consumerism.

"Of course, an artist's artistic development never stops. I've sometimes been accused of being apolitical. I would daresay that if you look at my work as a whole, that kind of escapism, that kind of subtle hint of yearning to see a new world is as political as you can get. The desire to see a new world unites everyone in Turkey whatever side they are on. Fantasy can express very real things about where a society is heading or what has been inflicted upon it," Köseman said, as he muses on the logical movement in his works from that of the invented biological specimens to his "Organic Houses" series which essentially answers the spiritual and also political demand for Sanctuary with the fleshy exterior designs of earth homes that bloomed from the seeds of his memories espying the architectural drawings and books of his father, the famous photographer Sıtkı Kösemen. "Everyone is in a constant search of a place they can truly call their home. This exhibit responds to the view that you can always leave the city but it will never leave you. Conversely, you don't need to physically leave your country and embark on a wild goose chase as a qualified refugee in another country. If you find that clarity, that way to travel within your mind then you are set. You've already found asylum."

In the summertime, Kösemen travels with blank sheaves of paper, some pencils and sketches his "Organic Houses" impromptu, as he would his paintings which he produces while immersed in his studio interiors during the fall, winter and spring. He is expressly satisfied with the curation by Musaoğlu and Güleryüz, who selected eight drawings for display from 24 pieces in total. "Sanctuary" exhibits 10 acrylics, many of which he sprayed with water as part of his process to emphasize marine textures in the spindly, vegetal forms that rise as from the ocean floor of a sunken, protozoan world. Plumbed from his voracious readings of scientific periodicals, almost every creature is as a new species, except for an anthropoid figment flying about with winged eyes. It appears as the feature piece, "The Staring Moon" (2016), only upright in Space Debris after a framing accident.

As illuminated by Musaoğlu, the advancement of palette is central to the defining, latest innovation from the young artist who is the subject of the documentary "Tangent Realms: The Worlds of C.M. Kösemen" by Kevin Schreck, and also the author of the book "Osman Hasan and the Tombstone Photographs of the Dönmes" which he lectures on internationally. While rejecting the darkness of "The Metamorphosis" by Kafka, he praises "The Book of Imaginary Beings" by Jorge Luis Borges. His piece, "Orosei" (2016) is the only painting at Space Debris that could be said to be without a foreground subject, as his waving brush washes over a slab of board recalling Munch's "The Scream" (1893) only silenced by the emergence of Sanctuary.