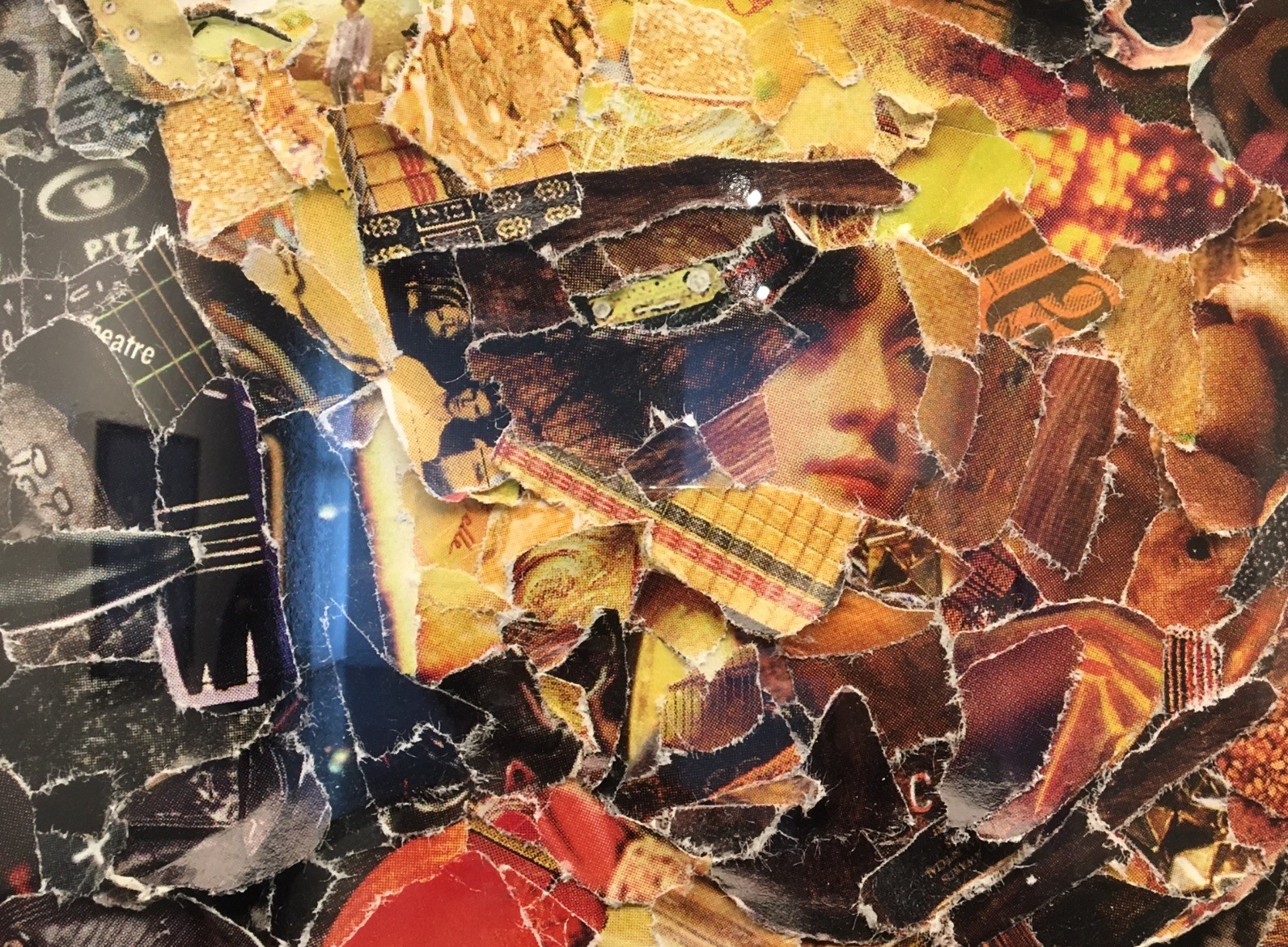 A cornerstone of Istanbul's countless contemporary art galleries, Dirimart opened a spacious second venue in 2016, branching out from Nişantaşı to the economically diverse quarter of Dolapdere, where Brazilian artist Vik Muniz will give a talk at his first solo show in Istanbul at 6 p.m. on Feb. 27

Vik Muniz's prompt to create what was in his heart and what would later become a worldwide sensation first came from the barrel of a gun. A bullet struck young Muniz in the leg during an unfortunate and all-too-common day in the life of a poor Brazilian boy in his hometown of Sao Paulo, where his life's inspiration was unborn surrounded by the blunt shards of brutalized and neglected humanity. The traumatic moment realigned his stars, as he was awarded a settlement that he quickly changed to dollars on the streets of New York, where he looked through the life-changing perspective of a camera lens to focus on his art. It was not until he moved to the United States and discovered European postmodernism and the Japanese group Mono-ha when he decided to become an artist, later preserving his fondness for South America in the magical realism of Jorge Luis Borges, Julio Cortazar and Gabriel Garcia Marquez.

Film director Lucy Walker affirmed the power behind the earthbound vision of Muniz, the centerpiece of her Oscar-nominated movie that documents his liberating Brazilian garbage pickers from the shackles of poverty by turning them into the highly valued subjects of his mixed-media works, ultimately giving them his proceeds from the sales. In an interview following the release of her deeply moving film, she explained how he essentially found his creative voice by photographing the missing pieces of the materialist's consumer puzzle: leftovers, condiments, junk and pollution. Before crystallizing his chosen medium through the click of a shutter, he found initial success as a sculptor, holding his first solo show in 1988 only five years after relocating to New York City during one of its more socially eruptive times when shock art, neo-Expressionism, deconstructivist design and neo-pop were crests on the waves of underground experimentalism. 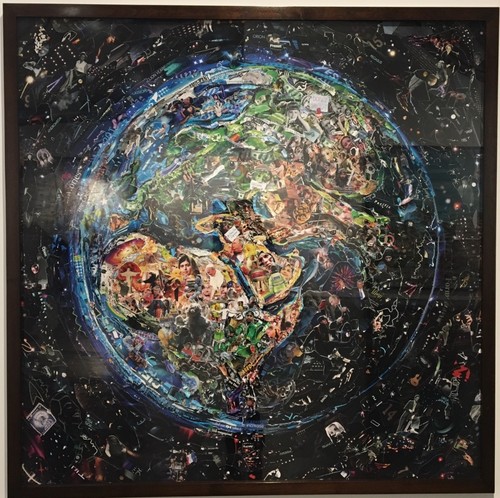 For "Mad World," Vik Muniz crafted the subconscious texture of the planet as a composite of published refuse.

Since the advent of modernism, contemporary art increasingly trended toward subjective abstraction to revolutionize the naturalist portrayal of objects into an enlightenment of reflexive perspectives arguably best summarized by the father of new media criticism, Marshall McLuhan, who declared, "The medium is the message." In response, Muniz gravitated to photography as a way to process his recurring motifs. He was not satisfied with only sculpting what he could see. Instead, the sculptures themselves would be the starting point through which he would conceive meticulously rendered still images. In other words, Muniz distills his craft as a search for visual correspondence between the technical and the personal.

He aspires to produce a universal language, walking a line invisible to most where the fickle nature of the mind is open to the precisions of manufactured reality. For his first solo show in Istanbul, self-titled "Vik Muniz" and featuring 18 of his works until March 11, the Dirimart gallerists in Dolapdere curated four of his internationally reputed series - Metachrome, Pictures of Magazine, Postcards from Nowhere and Repro. Their common thread is the effect of visceral optical illusions, characteristic of Muniz with his chaotic assemblages in detail harmonized when unified with the singular aesthetics of his peculiar brand of neorealism, one in which the slightest distance of perspective makes all the difference.

Before walking under the high ceilings of Dirimart, a venturesome art enthusiast is abruptly steeped in the range of social spectrums of Dolapdere. The often jammed freeway outside the ground-floor entrance is muffled once in the luxurious office building at 1-9 Irmak Avenue, where the signature gold hue of the Dirimart logo is emblazoned next to exhibition banners waving in industrial wind tunnels at the foot of ascending hills pockmarked with substandard housing and irregular factories. 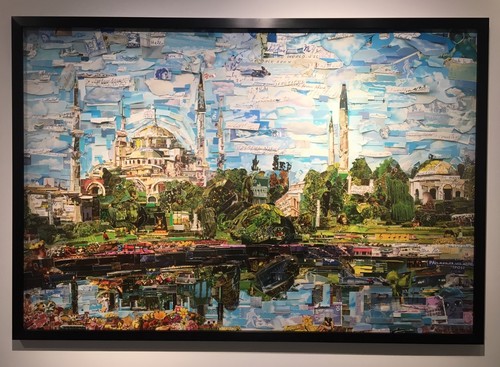 Dirimart features the digital C-print by Vik Muniz titled "Istanbul" from his "Postcards from Nowhere" series as a visual critique of Turkish cities.

In such a challenging environment of contrasts, the empathetic art of Vik Muniz is all the more fitting considering his work with similarly disaffected Brazilians in the behemoth cities of Latin America. In the eye of the urbanization hurricane, Dirimart Dolapdere immerses guests in an otherworldly respite of unbound artistry. Yet, the aesthetics of Muniz are not simply pacifying. At second glance, his works are deeply entwined with worldly critique and alternative insights into the prevailing cultural norms of the popular imagination and its image-making. Standing at a common vantage point to appreciate the entire frame of one of his works, a beautiful picture is clear with its elements in unison. A closer look stimulates the natural ability of the mind to notice variations to the extent that not only is the total image lost in kaleidoscopic detail, but it breaks down enough to lead to an entirely new visual experience.

His series, Pictures of Magazine and Postcards from Nowhere examine the irrational abstractions of capitalist-driven cultural production as with the roving magnifying glass of a voracious tabloid reader, a paper hoarder of travel memorabilia, a paranoid conspiracy theorist buried in clippings. As for his Repro series, he ingeniously reconstructs modern masterpieces, from "The Boy Camille Roulin" by Vincent van Gogh to "The White Girl" by James Whistler, with the exacting craft of a sculptor shaping his underlying metaphysical demonstrations to question the ordinary assumptions of art appreciation. That the ordinary mind sees a masterpiece in the shredded rubbish of a short-lived periodical is as much a testament to the basic quality of the human mind as much as it is to the work of the artist himself.

Brazilian art critic and curator Ligia Canongia employed high-minded references to Plato and Jean Baudrillard to expound on his 2014 exhibition "The Size of the World" held in Porto Alegre. In a thick publication to celebrate the famous artist in his native land, she writes of his ability to unmask the illusion of appearances. Through his works, Muniz has the character of a compassionate, creative intellect whose goodwill is not only limitless, but transcendent as he mixes the sacred and the profane of the globally dominant secular paradigm in the overlapping and simultaneous dialectics of his rigorously composed forms. From the solemn poor to a shallow tourist, his works are capable of reaching the beauty and magic that everyone carries within, independent of personal and cultural history. It is a truth that all may rediscover by simply looking at such art, and Muniz offers the opportunity with special consideration to those outside the narrow confines of the cultural elite.

Every image doubles as a trick of the mind, an unseen transformation of its materials coming to life through semiconscious processes of perception and recognition. What seems to be a reproduction of "Italian Garden" by Klimt is actually an ordered mashup of crushed pastels from his Metachrome series. A shy glance into the "Origin of the World" inspired by Gustave Courbet from his Pictures of Magazine series is exposed as a sensitive collage of magazine cutouts depicting babies and women. From afar and to the untrained eye, Muniz appears to have captured the prodigious originality of the painters in each deliberate brushstroke adapted in his mixed-media invention, snapped onto a digital C-print. In the exhibition's feature piece, "Istanbul" from the Postcards from Nowhere series, Muniz strikes at the root of the most cliche of all Turkish aesthetics, ripped from the omnipresent, typecast landscape of the Sublime Porte, as fragments of handwritten stereotypes glorifying the classic view are sprawled against stilted spires reflecting over an unreal, glassy Bosporus.

"I cannot imagine my audience. I never could. I do not have a specific person of a certain age, sex, academic background in mind ... nothing," Muniz told writer and curator Kathy Battista, formerly the director of contemporary art at Sotheby's Institute of Art in New York when she conducted an interview for the May 2009 issue of the art magazine Res, a publication slated to return to print under the direction of Dirimart. "When you are just outside of it just imagining things, there is the gap. A lot of my interests come from this gap between reality and intellect. I do not believe in intellectual property. If you learn something, you should pass it on."