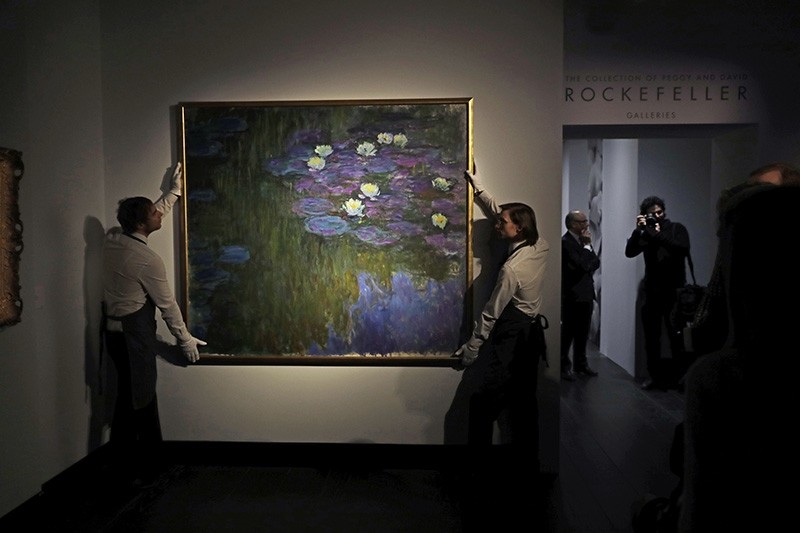 An art collection amassed by billionaire David Rockefeller could raise more than $500 million for charity when it is auctioned this spring.

Auctioneer Christie's is selling hundreds of artworks including major paintings by Claude Monet, Henri Matisse and Pablo Picasso, from the collection of the oil-family scion and his wife Peggy .

Rockefeller, grandson of Standard Oil founder John D. Rockefeller, died in March at the age of 101. His family is selling the art collection to benefit cultural, educational, medical and environmental charities.

It includes Monet's water-lily painting "Nympheas en fleur," estimated to sell for $50 million to $70 million, and Picasso's "Fillette a la corbeille fleurie (Young Girl with a Flower Basket)," which has an estimate of $90 million to $120 million.

"You end up running out of superlatives," Jonathan Rendell, deputy chairman of Christie's Americas, said at a preview Tuesday. "Some of the things are jaw-dropping."

Rendell cites Picasso's "extraordinary" portrait of a young girl, which was painted in 1905 when the artist was in his early 20s, and first bought by writer Gertrude Stein.

Also up for sale is a small painting of an apple, given by Picasso as a gift to Stein, a friend and patron.

"That little apple is a lovely object because it takes you right into the history of art," Rendell said. "Picasso's gift to Gertrude Stein, who made his career — it doesn't get much better than that."

Matisse's reclining nude, "Odalisque couchee aux magnolias" is expected to sell for $50 million, breaking the sale record for the artist.

"I expect to see quite a lot of records broken," Rendell said. He added: "That was my most English understatement."

As well as major European Impressionist and modern paintings, the Rockefeller collection includes works by American artists such as Edward Hopper and Georgia O'Keefe. Also up for sale is a selection of furniture, jewelry, Chinese bronzes and porcelain — including a dessert service that accompanied Napoleon into exile on the island of Elba.

Highlights of the collection are on display in London from Wednesday to March 8. There will also be previews in Paris, Beijing, Los Angeles and Shanghai before a series of sales in New York from May 7 to 11.