The muse always returns: A new visual trinity at CerModern 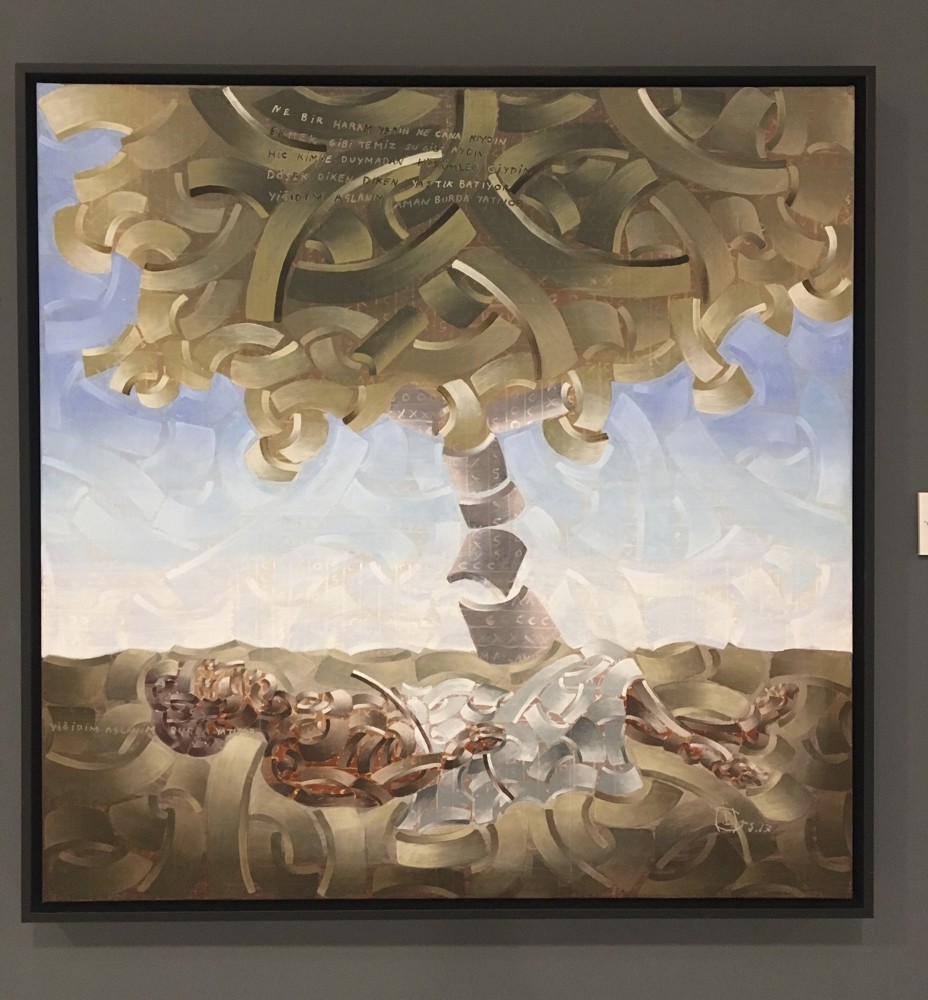 Through March 25, the dialogue between modern and contemporary is, again, led by the historic d Group, with its artist Bedri Rahmi Eyüboğlu also in the exhibition ‘Colors of Verses' featuring young Mardin-born painter Şahin Demir whose fourth solo show is on display at CerModern until March 4

The former railway workshop of the 1920s that later opened as CerModern in 2010 housed train maintenance workshops in stonework sheds under the girth of its industrial gable roofing in the early Republic. The brawny optimism of manual workers in the newly modernizing capital filled the expansive floor as they ducked and turned inside knots of metal bracing that now decorate the illumined, premier art gallery in Ankara. In the years before its designated renewal, the building had the eerie look of abandonment, with its cracked windows and weathered exterior since restored to glittering facades befitting a majestic institution made to preserve the unique, creative integrity of the people as they became a modern nation.

In the age of iconoclasts breaking with the past, the idea that art would be bound by time, by a crowd, was unacceptable, an ideology akin to the dogmas of politics, not to a renewal in the techniques and schemes behind painting differently. From such ways of thinking outside of the box, the d Group liberated itself from prosaic definition. In 1933, its core septet, Abidin Dino, Cemal Nadir Güler, Nurullah Berk, Elif Naci, Zeki Faik İzer and Zühtü Müridoğlu proposed a manifesto to join the ranks of similar decrees on behalf of the chief proponents of nonverbal expression in the unbounded, international society of free expression known as the art world. The terse 19-line piece of writing is stamped about CerModern for the "d Group, again" exhibition until March 25. It appears in the display hall where artworks are neatly spaced apart and titled. It shows up in the brochure, catalogue, book and even on the gallery cafe menu. 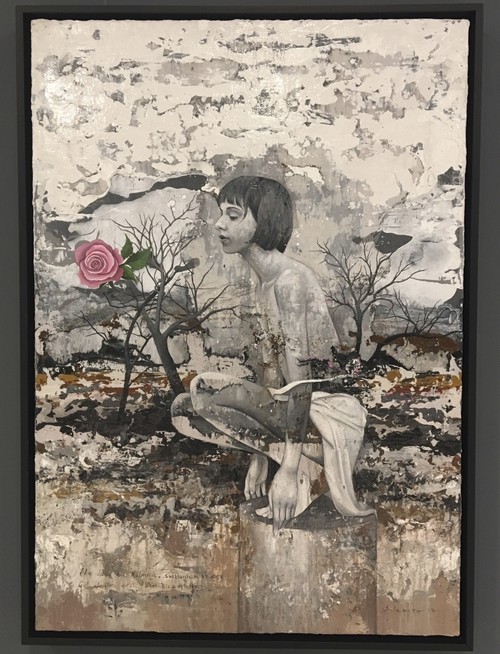 CerModern subtly intertwines three of its current exhibitions, as young artist Şahin Demir exhibits a piece in "Colors of Verses" alongside his solo show until March 4.

The manifesto begins like something out of a Chuck Palahniuk novel: "The d Group is not a group." Warmly surreal, the language pairs such images as oxen and photographs, and a mutant being, six-headed, six-eyed, unschooled and decolonized, beyond word and theory, lost to all sense of geography and identity. It is the case for the most influential manifestoes that graced the art world from 1909 to 2012, chronicled in the book "Why Are We Artists?" by Jessica Lack, that it prompted a creative, metaphorical language to encapsulate philosophies that were in fact only truly evident in visual form, and during especially abstract ventures, not even then. The d Group named themselves after the fourth letter in the Latin alphabet because they simultaneously affirmed modernist Turkish language reforms while considering themselves the fourth art group to emerge in Turkey, after the Union of Fine Arts (Association of Ottoman Artists), Association of New Painters, and the Independent Painters and Sculptors.

d Group artists were proud of themselves for raising controversy. They criticized academicism and were criticized themselves for practicing aesthetics that reconciled the geometry of Anatolian embroidery with cubism. In the years between 1933 and 1960, as they performed 17 exhibitions in the midst of popular excitement over the rise of the movement, membership increased. For the current "d Group, again" show at CerModern, pieces from 21 artists are on display, ranging from the copper and wood reliefs of Zühtü Müridoğlu to the still life paintings of Salih Nuri Urallı and the cartoon caricatures of Cemal Nadir Güler.

Among the more striking paintings are still those that are plainly realistic, evoking particular scenes as any Romantic canvas would seek to relay a subject in pictures. An example is "Republic Day" by Zeki Faik İzer showing that while the d Group artists espoused to have transcended nationalism, they did not shy from depicting its manifestations. And then there are radiantly abstract forms, as in "Antibes, 1955" by Abidin Dino, a retrospective homage to the French-Russian painter Nicolas de Stael, who died in Antibes in 1955, and is widely esteemed as an abstract painter par excellence. Some of the scenes in the exhibition that depict daily life in Turkey are simply fascinating. "Conversation" by Elif Naci evokes the filmic quality of Anatolian men at odds on opposite sides of the table over unmarked drink.

A most sweet painter curated for "d Group, again" is Eren Eyüboğlu, the wife of Bedri Rahmi Eyüboğlu, certainly a household surname in the Turkish art world. Her impressionistic landscapes and cubist portraits have all of the authentic character of the age in which they lived, yet are not dated. She ingeniously captures her time, as in "Yellow Bracelet" of a typically fashionable woman from the year 1930, only with a timeless effect. And later, her "Village Mother" (1954), is arguably one of the best distillations of cubism as a visual philosophy ever painted, where her subject confronts the distortion of her shape against a sharp black line, bent over with a child on her back. She carries the burden of the elementary shapes that the aesthetic deftly renders.

If the English performance artist and sound poet Brion Gysin was right, that writing is 50 years behind painting, then the d Group were really onto something when they declared that Turkish painting was 50 years behind painting. For those who drink from a half-empty glass, Turkey is a century behind literate culture. To someone who sees the bright side, what it could mean is that Turkish art and world literature are synchronized. The positive observation is curated by project director Fahri Özdemir with historical finesse for the "Colors of Verses" exhibition. In it, Bedri Rahmi Eyüboğlu appears again, separated from his d Group pack in his other life as a writer. The yellowed manuscript of his poem, "Prisons Are Carved from Stone" is framed beside its interpretation as the painting, "my brave my lion lies here" (2017) from Özdemir's personal collection, conceived under the graphically precise hand of İbrahim Örs.

Like most of the paintings in the exhibition it is marked with scrawls of handwritten excerpts from the original literary work. Örs pictured a man sleeping, as one imprisoned, half-naked and ridden with plates of metal below and above, oppressive and lifeless beneath, causing the human form to unravel powerlessly, to assume the artifice of a greatly feared, mechanical demise. Another irresistible canvas catches the eye for its textural and color contrasts, almost monochromatic in bleak grey and unearthly browns, as the outline of a shapely black-and-white woman disappears into the roughened acrylic, reflective and at peace in the presence of a single rose, whose pink hues and green leaves seem to glow against the stark background. It is "waiting" (2017) by Şahin Demir, set to a piece of writing from 1977 by Cahit Külebi "The East" also drawn from the personal collection of Özdemir.

Downstairs underneath the main exhibition hall at CerModern, a dedicated gallery called Hub curates the solo show "From the Texture" by Şahin Demir. It welcomes guests with an epigraph from Rimbaud's "Drunken Boat" ending with the uncanny, Symbolist statement: "And at times I have seen what man thought he saw!" Its 41 paintings are an exhaustive supply of the acrylic imagination, with four of the pieces created in 2018, one month before the exhibition opened in the first week of February.

The title piece, "From the Texture" is an abstract, non-pictorial exemplification of the recurring technical motif in liberal dabs of paint that appear out of a geological stratum, striped and cut with multicolored engravings of earth tones. His portraits are magically exacting, as they emerge from the effectively charred layers of paint like experienced reality itself surfacing on the outlying, perceptive senses of the mind. Demir is a master of character drawing, as the faces of his subjects, often young women, are torn with emotion as out of the pages of history and into the total mystery of life as it is lived. Mostly immersed in nature, and sometimes nude, he is a surgeon of the female form, placing her body alongside animals in mythical landscapes that fall away from her skin into fading streams of sensual paint.