Across from the rotary bust of the late journalist Abdi İpekçi in the upscale Nişantaşı district, Kare Art Gallery has exhibited postmodern and contemporary art since 1991. Its current show of 13 international artists, ‘Imaginative Time,' is by the seasoned curator Denizhan Özer and runs until March 21

Humanity and reality have been in dialogue since time immemorial, and on record with the emergence of ancient philosophy, from the experiential schools of Vedic India to the rhetorical debates of Classical Greece. It is a constant, persistent source of wonder from then to now as the highest intellectual and spiritual aims of civilization have ever sought to grasp at the line where subjects and objects merge, where the senses meet the world. The search for truth as the ultimate reality has come into unprecedented confrontation with the technological infrastructure in the nuclear age. From the fires of prehistory to the television set, no one had ever laid eyes on gleaming light for so long other than by the warmth of a stoked flame or under moonlight until the advent of cable. Nowadays, philosophers and all forms of seekers are bewildered by the rise of such streams of passive, user consumerism as that which cultivates and surrenders to surrealism, neorealism, hyperrealism, photorealism and finally, unrealism.

That more questions arise than are possible to answer in such an adventure of the human soul is a nagging inevitability. While it has dogged those confined to reason, the artists of the world thrive on its core interrogations, plugging away at the catastrophic magic that is cyberspace and its pervasions. Art speaks volumes of the immediate reflections of the present and its cultural norms. If it can be spoken of generally, it is also a tool to develop individual thought and social consciousness, independent of the institutional frameworks in which the more specialized and lofty of the sciences often live and die. From music to painting, the trendiest technological leaps attract the creative mind even in its subtlest, most refined activities. Beyond postmodernism, before Duchamp and Warhol, art served as a means of transcendence for its practitioners, as a refuge from the existential oppressions of culture, society, and identity. 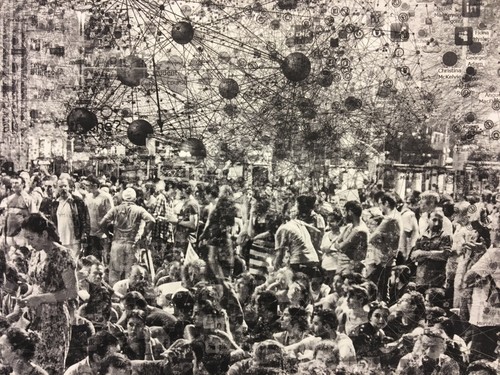 And in that way, exhibitions such as "Imaginative Time" are cathartic in many ways, guiding the 21st century wayfarer over a pathless and untraceable field led by multimedia innovators who navigate the prevailing round-the-clock mass immersion into the unreal, virtual, and digital overlaps of sensation filtered through corporatized devices that cover the eyes and fill the ears to excess. What is seen and heard today by the countless many is largely mediated through the collectives of interconnectivity that double and triple and quadruple in limitless, automated reproduction. The sensations of life are reduced to shadows of figments of mirages of actual, undivided experience. It is a social reality that haunts the art world alike, as the simple importance of standing in front of a live work of art is increasingly lost to its digitization, and to the long-winded opinions of fully computerized commentators who drum up empty talk from a safe distance screens away.

Inside the second floor of the 22 Building along the wide boulevards of Istanbul's classiest quarter of Nişantaşı, the gallery space that has been the home of Kare Art Gallery since 1991 currently examines the age-old artistic inquisition of worldly truth. The gallery founder and director is Fatma Saka, a veteran Turkish art lover, presently in England, where she often appreciates openings at the Tate Modern. For years, she has been colleagues with the colorful curator Denizhan Özer, advancing the latest, contemporary art movements from around the globe on the frontline of the Turkish cultural establishment. The current exhibition, "Imaginative Time," is an unflinching, intimate look into the infinitely mirrored wormhole of media, advertisements and computers that have dominated the average person's life more and more in the last hundred years since the rise of commercial radio. 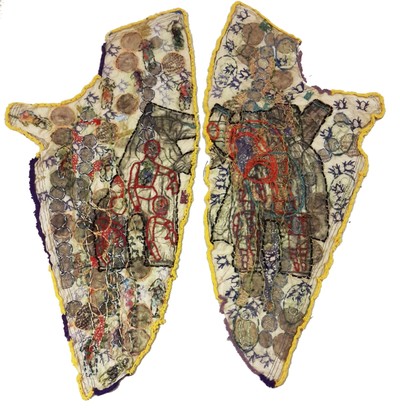 "When you wake up in the morning, automatically you look at social media, check emails. At the same time, the television is on and when you go out there are lots of advertisements. These visions come like layers. When another comes, the first one is forgotten. We are discussing this century from different angles with the artists," said Denizhan Özer, a warm and affable conversationalist with an encyclopedic knowledge of the artists that he has exhibited throughout his career from Mongolia, Korea, and Germany to England and elsewhere.

"Serdal Kesgin uses shopping bags and an acrylic mirror so that we see ourselves. When we buy we do not see ourselves. Buying, and buying, and buying and we don't know what we are doing after that. Tansel Türkdoğan, from Ankara, painted images from 'Simulacra and Simulation' by Baudrillard, which says: All our life, whatever we see, is a transparent illusion."

Özer is as generous with his thoughts as he is with his time, casually ambling around the gallery space at Kare Art with a refined sense of humor, quick to elucidate on the philosophical background to all of his intuitive curations with his characteristic pragmatism. While it is impossible to speak of the essence of any particular artwork directly, there are endless varieties of avenues by which an eloquent thinker may traverse the gaps between the visual and the verbal, and Özer strolls up and down them with the confidence of his two decades of curating. When he began there were no programs to study art curation, so he first learned to paint.

"Cities are getting bigger and bigger every day. All of these cities have lost their identities. If you look at Ankara, Athens, Oslo, everywhere is the same building, the same Starbucks, the same credit card, the same McDonalds. Before, old cities had their own cultural identity. With modernism, we lost totally all of it. This is 'Imaginative Time,'" said Özer, explaining a series of works as he moves from "Defense" (Himaye) the holographic, lenticular digital print of Murat Gemen to the Mischteknik painting "Green Area" (Yeşil Alan) by Semih Zeki critically examining the vital points of insights that went into the creation and exhibition of each piece. "We forget nature. We are putting buildings everywhere."

He is in demand as an independent curator looking forward to his next exhibition in Istanbul at Kibele Gallery in Levent, opening on the March 15, while at the same time preparing works for the Venice art fair in Italy to premiere the day after. Since participating in the Çanakkale Biennial, he has attempted to expand Imaginative Time into a new Biennial in Turkey, to take place in the southeastern Anatolian city of Gaziantep but it's been a hard road as local authorities are weary of contemporary arts funding in an unstable region. He sees every exhibition as a unique, mathematical proof in which a variety of pieces communicate with each other and with the space.

In the case of "Imaginative Time" at Kare Art, the piece "Sanal Manzaralar #011" (Virtual Landscapes #011) by Ali Alışır appears from the gallery entrance, introducing the show from its cloud of the overpopulated multitudes swarming with geometrical interconnections between each individual named and linked and profiled against a looming trail of corporate media logos. Already having worked with everyone before, Özer gathered the artists with a mind for global, social diversity across generations and genders. Works by two Cypriot artists, the storybook comforter of Anger Onar and the photographic documents of Emin Çizenel, detail the enduring intimacies of the changing times since 1974.

In a stimulating triptych, Polish op artist Monika Bulanda returns to Kare Gallery with a set of visual critiques on commercial portraiture that cleverly swivel interactively as the viewer approaches. Pakistani mixed-media artist Mehwish Iqbal has one of her untitled works on paper, made with techniques in silk screen, calligraphy, etching, and embroidery to relay the effect of its delicate human figures bound and tangled in the earthly background in which they are made visible.

"With the development of technology, the progress in communication and the creation of a virtual world, it is no longer easy to talk about reality [...] It is a known fact that the structure of our times, which does not belong to us, leads us to consumerism, directs our social life through virtuality, makes our inner-self void and destroys our system of thought, takes shape over images [...] We encounter images from the time we get up until the moment we go back to bed," wrote Özer in an essay he prepared to coincide with "Imaginative Time."

"How much a person, whose presence changes according to time, exists within synthetic images produced by technology which has a manipulative nature, and how much longer he will survive like this is the greatest question of our times."