In The Ruins of Athens: A Play about the Greek Economic Crisis

When Europa gets onto the stage, u201cI am Europa,u201d she explains, the Phoenician princess namesake of the continent.
by Nagihan Haliloğlu Mar 10, 2018 12:00 am

The play ‘In the Ruins of Athens' retells the story of the Greek economic crises starting from the very first measures taken in 2009. Le Birgit Ensemble's stage production divides the action to two spheres, one where politicians are making decisions that are impossible to implement on the ground, and another where the Greek people are subjected to measures that turn their lives into a reality show of attrition

In the last play of their European cycle, "Dans Les Ruines D'Athenes," Le Birgit Ensemble go to the eastern edge of Europe, Greece, the country that is supposed to be the fountainhead of European culture. Le Birgit Ensemble has established themselves as a company that does not shy away from asking fundamental questions and involving the audience when answering them. In this play, the validity of the austerity measures imposed by the EU on Greece is questioned, with references to Greek myth and tragedy.

"In the Ruins of Athens" begins with fanfare and glittering lights, as two reality show presenters, Calypso and Hyppolite, take to the stage with smiles as big as Greece's national debt. They welcome the audience and the loud beats of the music encourage the viewers to clap along with them. In fact, the audience has already been welcomed. The program given to the audience before they take their seats is an invitation to "keep your mobiles on" so that you can actually engage with the reality show "Parthenon Story" you are about to watch. 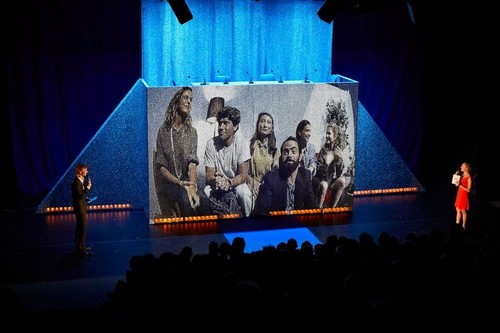 "In the Ruins of Athens" begins with fanfare and glittering lights, as two reality show presenters, Calypso and Hyppolite, take to the stage with smiles as big as Greece's national debt.

The pleasantries exchanged between Calypso and Hyppolite are so hearty that you are almost taken in on this enjoyable ride, but then you remember that that is how reality show presenters are trained to act. It is a "Big Brother" type show where contestants with big debts live in a house together and are voted off one by one, and the show pays the debt of the last remaining contestant. The six contestants are named Medea, Antigone, Orestes, Cassandra, Ulysses and Iphigenia. They walk one by one from the auditorium to the stage and introduce themselves before they go into the Parthenon Story house. It is interesting to see how these characters will turn out to be modern versions of their namesakes. Medea, for instance, is a single mother, and tells the audience that she has entered the contest to get rid of her debt so she can provide a better future for her daughters. The moment is classic black comedy: Those who know their Greek tragedies know what future holds for Medea's children.

After the contestants enter the silvery, glitter-covered box that is the Parthenon Story house, the lights go out, and then come on again, this time only on the platform that is just above the box. There are blue chairs behind a conference table and microphones. It is a scene we are familiar with from news bulletins, and so we brace ourselves to hear political rhetoric. And the cast of Birgit Ensemble give us just that, possibly more of it than we can handle. There is a sign below the table that says "9 years ago, 2009." Nine years before Greece was plunged into debt. The first politicians that we see discussing Greece's finances are Nicholas Sarkozy, Angela Merkel and Giorgos Papakonstantinou. Her sidekicks will change, but as we all know, Merkel is here for the long haul, and Birgit Ensemble has decided to cast her character as a naive matter-of-fact leader who simply cannot understand how other countries fail to obey economic rules, while Germany functions like clockwork. The decisions taken at this meeting will invariably affect the lives of Greek people, including the inmates of Parthenon Story.

The endless rhetoric of the leaders to keep the union intact by squeezing the Greek people's belt, all the appetizers and canapes they consume to lubricate the discussion seem very funny to the audience, watching these events from 2018, the year of Brexit negotiations. It puts the audience in the place of Olympian gods, watching mortals - aspiring and ineffective politicians - striving to build and sustain something that the immortals - the audience - know will not last. In this theocracy, it is the inmates of the Parthenon Story house whose actions the audience cannot predict. Even though we may kick them out of the house through the online voting system, we do not know how they will react. So in that sense, although the contestants are confined, they are given a sense freedom that the politicians lack. Thus, the play places hope in the Greek people, who still have the potential to act against the script they have been given both by politicians - their own and international - and the audience. 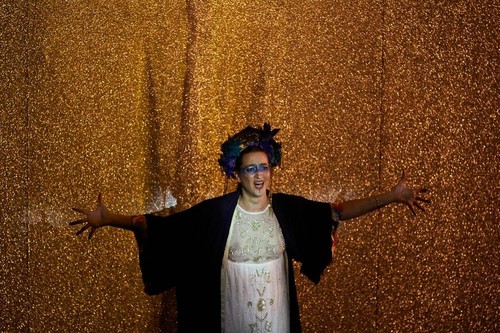 In the play, the validity of the austerity measures imposed by the EU on Greece is questioned, with references to Greek myth and tragedy.

There is, however, another force that affects the lives of Greeks and Europeans at large. It is Europa. We first hear her call out, "Who disturbs my repose?" in regal, deep tones. When she gets onto the stage, "I am Europa," she explains, the Phoenician princess namesake of the continent. She tells us how she ended up in the place we now call by her name, how she got on Zeus's back and rode at full speed and how at the end of the trip, she discovered she was pregnant, in a tour de force of vocal prowess and body poetry.

In the Parthenon House, inmates get along excellently with one another, while the programmers cut off electricity and water, and play psychological games on them. They announce who will leave the house according to the polls the audience has participated in, and then change their minds, making editorial decisions. This sense of the public being given a choice and then their decisions being ignored is of course a metaphor for the elective processes in Europe. When we consider the European timeline that Birgit Ensemble is interested in in their plays, it is a referendum that declares Bosnian sovereignty, rejects the measures imposed on Greece and severs Britain's ties with Europe. As the years progress and European politicians and World Bank heads around Merkel change, Dominique Strauss-Khan also makes an appearance in the play, and I think Birgit Ensemble misses a trick by not making a reference to his sexual harassment case. What better metaphor is there for rich countries bullying poorer ones than an old rich man harassing a younger, unprivileged woman?

The scenes continue to alternate between the Parthenon Story house and the European Union leaders trying to save the euro. Finally, we come to the Alexis Tsipras era. In one scene he is not on the upper level where the politicians are represented but on the ground, the level of Parthenon Story, and is trying to answer to his political elders. "Going to the people, that's populism, going against the people for the good of the country, that's courage," says François Hollande to him in crisp tones.

After the various hardships the Parthenon Story contestants are put through, the figure of Europa starts to appear to them. With her help, they rebel, get out and manage to lock the politicians in the house. As things take on this darker turn, the Birgit Ensemble softens the genre by having the politicians sing of their misery. Lafarge, who has taken over from Strauss-Kahn, and whom Merkel has welcomed as having at last another woman around the table, goes on confession mode to the video recorder about her upbringing and education.

There is a great moment when Merkel, with the whole load of Europe on her shoulders, breaks into tears and asks Europa to help her. Her wish is granted, and Europa appears in the house, blessing even the inefficient politicians. "Honor me!" she cries, and then all will be well. Then she starts singing, and her angry tones slowly mellow into reconciliation. The Parthenon Story candidates and the politicians join her, then the audience. Before we know it, the politicians have stepped into the auditorium carrying trays of drinks in small plastic cups. Hollande stands by my side and offers me a glass, and for a second I mean to push the interaction a bit further by asking him whether the drink is alcoholic. I decide not to, ask the people sitting next to me, and drink this nonalcoholic toast to the union of Europe. For one magical moment in the theater, a unified Europe seems possible, even to this member of the audience who is destined always to be watching from the wings.