Turkish contemporary and modern paintings up for auction Artwork by pioneering Turkish artists such as Neşet Günal, Fahrelnisa Zeid, Burhan Doğançay and Fikret Mualla will go on auction on March 25 at Beyaz Müzayede in Istanbul

The 43rd Beyaz Contemporary and Modern Art Museum will be holding an auction on March 25 offering Turkish contemporary and modern art, including pieces by Neşet Günal, Fahrelnisa Zeid, Burhan Doğançay and Fikret Mualla along with young, contemporary Turkish artists. The auction has 239 extraordinary pieces on offer by 125 artists from various significant collections.

Record sales are expected at the auction, and one of the most awaited pieces is Neşet Günal's "Abla ve Kardeşleri" (Older Sister and Siblings). This masterpiece of Günal, who has 120 canvas paintings, is expected to be sold for between TL 550,000 and TL 850,000 ($141,240 to $218,280). The most significant of Günal's pieces to be auctioned since 2010, it is expected to fetch a new record price. Another piece is "Rast Gele" (Random) by another contemporary artist, Cevat Dereli. 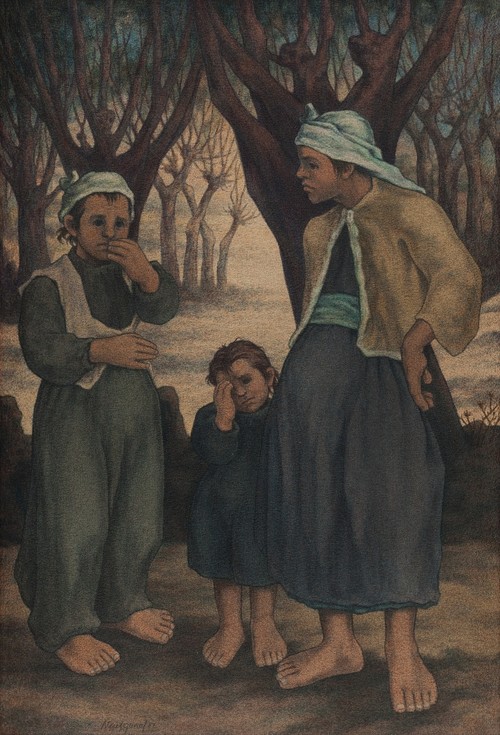 Another Turkish abstract artist, Erol Akyavaş's two canvases, which are included in his books, are also up for auction. Among the pieces by Akyavaş are "Lacivert ve Violet Soyut" (Navy and the Violet Abstract), painted in 1987, and "Zaman Her Şeyi Siler" (Time Erases Everything), from 1981. They are expected to be sold for between TL 200,000 and TL 300,000.

Along with "Abla ve Kardeşleri," the most important piece by Neşet Günal sold since 2010, Cevat Dereli's "Random" is also expected to set new records.

The auction also includes paintings by Nejad Melih Devrim, Mubin Orhon, Selim Turan, Hakkı Anlı and Abidin Dino, deemed as the French Ecole of Turkish contemporary and modern art and who lived in Paris from the 1950s to the 1970s, was a contemporary with some of the most important representatives of European painting of the time.

A large collection of 15 paintings of different sizes by Fikret Mualla, who was not only famous for his extravagant, turbulent and bohemian lifestyle, but also became a legend for his art, will also be sold. Mualla left Turkey in 1938 to live in Paris and passed away in 1967. His paintings are some of the most attractive and interesting pieces at the auction.

The auctioned paintings will be displayed at Beyaz Space, Beyaz Auction's art venue in Nişantaşı, from March 15 to March 24. The auction will be managed by Aziz Karadeniz and will take place on Sunday, March 25 at 2 p.m. at Swissotel, Istanbul.