Melchior Lorck sought to capture the scale of 16th century Istanbul with a 1145-centimeter-long magnum opus topographic drawing, which also features his first self-portrait.
by Matt Hanson Mar 23, 2018 12:00 am

In 1555, Danish artist Melchior Lorck entered the dominion of Süleyman the Magnificent and produced what is still the most complete visual record of the Ottoman Empire in the 16th century. He was also the first Danish artist in history in terms of extant biography and body of work

In a self-portrait dated 1575, the artist Melchior Lorck has the look of an emperor, only with double bags under his eyes, which seem softer than that of a ruler. His facial hair is wavier, freer and less rigid than his royal superiors. He stares to the right with a profile of dignity, his neck shawled in something of a toga befitting his Renaissance contemporaries at the onset of the Enlightenment who were inspired to create neoclassical masterpieces for the next three centuries. While serving as honorary guard in a company of archers under Danish King Frederick II, Lorck drew inspiration for his life's work from the ancient, imperial capital at the eastern edge of Europe that was shrouded in the mysteries of its names, Mickelgarth to the Vikings, Constantinople to the indigenous Greeks, the Sublime Porte to the romantic French and Konstantiniye to the ruling Muslims.

Originally from the German town of Flensburg where the Danish minority still carries the traditions of the mother tongue, Lorck lived during a time when Danish heritage was among the most powerful in Western Europe as its civilization spread to Iceland and Norway and as far as Estonia, with Greenland being its remaining extraterritorial legacy. Henrik Ibsen, a 19th century playwright comparable to Shakespeare in importance for fathering realism and modernism in theater, wrote and published his plays in Danish, then the common language of his native Norway. And as the dominant European culture that would come to be known as the West enjoyed its incipient global rise, visionaries like Lorck captured the apex of cultural development in late Islamic civilization as it came to fruition under Sultan Süleyman, who he apparently saw and engraved for a portrait in 1559, the last year he spent in the Ottoman Empire before leaving for Vienna. It had been a charged four years despite nearly half of it spent in confinement as he drafted fellow foreigners and rooftops from a narrow window in the German outpost caravanserai.

An eye for empires

By the time Lorck made the engraving of Süleyman, the sultan was already known as Süleyman the Magnificent in the West and the Lawgiver to his imperial subjects in the empire with respect to his poetics of strategy as a sensitive legislator. He was arguably the most humanist sultan of the Ottomans, as he lived most of his life to a finer resonance beyond the glories of Mehmed the Conqueror and the dreams of Osman I. In 1559, when Süleyman met Lorck, his greatest accomplishments were behind him, writing verse under an alias to his favorite wife, his "one and only love" while supporting poetry and the arts in Turkey as none other. Lorck's portraiture also covered his ambassadorial entourage, including one remarkably early travel writer, Flemish herbalist and diplomat Ogier Ghiselin de Busbecq. In the last months of his diplomatic service, Lorck was busy drawing everything from the ranks and nationalities of the Ottoman army to the dress and customs of society while documenting ancient and modern monuments across the empire, many of which are now lost, such as the fifth century Arcadius Column long destroyed by an earthquake, its vividly detailed reliefs once outlining the Roman defeat of the Goths. 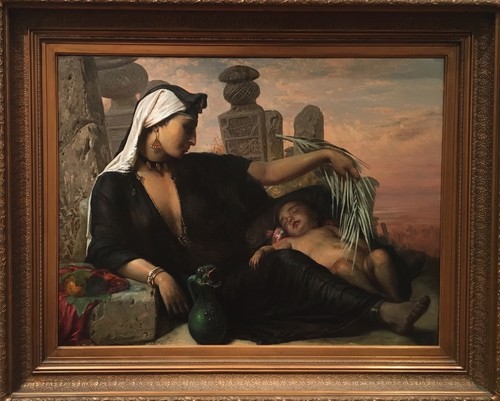 The painting "An Egyptian Fellah Woman with her Baby," (1872), by Elisabeth Jerichau Baumann represents some of the more authentic European orientalist art.

Lorck's magnum opus was a drawing on 22 sheets called "The Prospect of Constantinople" (c. 1562), the first of many panoramic works of the city that would reach the West, defining Constantinople as an essential, global nucleus of perennial intrigue and fascination. Even then, Constantinople's level of construction was mammoth, its heights splendorous with geometric fantasy, and Lorck represented it in the scale of his 1,145-centimeter-long topographic drawing that redefined art, as it did popular perception of the greater world when he finished it the year he met the sultan. In its lower right corner is his initial self-portrait, although he is about face, standing from Galata where so many today peer out over the floating horizon to spy the remnants of two vanquished empires. One almost sees the smoking rubble still rising where he saw the dust settle as it began to collect. For his 1575 self-portrait, his worn face shows the stress lines that must have come with his petitioning for royal finances for the project that would seal his fame in art history, a series of 128 surviving woodcuts and writings known as "The Turkish Publication." In a twist of mystery, its realization is mixed in his untimely disappearance.

Before his unexplained death, he painted a full-length portrait of King Frederick II in 1581, a piece that represents the earliest work of its kind in Danish art. As is clear during a walk through the National Gallery of Denmark in Copenhagen, elite portraiture would define trends in creative patronage for Danish artists for the next three centuries, as it did throughout Europe. Aside from the portrait of Mahmud Agas, ambassador of Tripolis, painted by Carl Gustaf Pilo in 1757, the focus on the Ottomans would not reemerge in Denmark with as much potency as under the eye of Lorck until the Romantic era of the 19th century. It was then when artists decided to liberate themselves together with society. They did so by re-entering the Orient, often after a bout of merry freedom in Rome, where many Danish and other international artists converged before setting out to rough it in the territories of Greece, which crawled with armed rebels from across the Balkans. In one example, Constantin Hansen painted "A Group of Danish Artists in Rome" in 1837 to assert the serious intellectual work of art against the tourist frivolity that may have prompted earlier travelers to delight in the curiosities of exotic lands. The piece shows architect Gottlieb Bindesboll stretched out on the floor, adorned in a fez as he airs out stories from his travels in Greece while his proteges smoke chibouks and gaze in wonder. 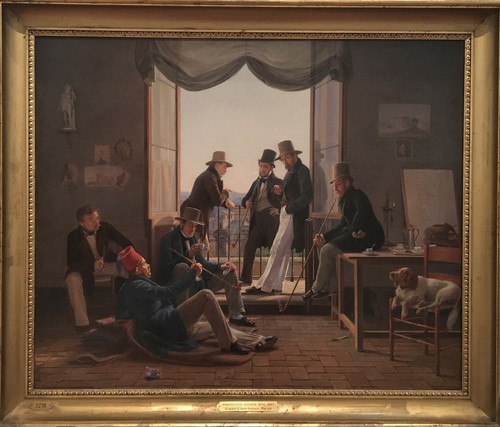 Constantin Hansen captured the crest of the 19th century European art movement as it crashed into the Ottoman Empire from such artist meetings as that depicted in his 1837 painting "A Group of Danish Artists in Rome."

At the National Gallery of Denmark, the country's leading arts institution, Lorck is largely out of sight, archived in the depths of its print rooms where hundreds of digitized works maintain one of Europe's most important cultural inheritances. As the foremost Lorck scholar, Erik Fischer prefaced to The Royal Library's four-volume, 2009 publication on the artist: "The prints came to acquire the status of being one of the Europeans' most important sources of knowledge about the 'exotic' Ottoman Empire." They were in the possession of Rembrandt, among other notables. Yet, it is in the realist oils of Elisabeth Jerichau Baumann where most see the Danish-Ottoman connection through the arts, particularly her piece, "The Princess Nazili Hanum" (1878), based on her experiences in the highest circles of Constantinople under the auspices of the most influential European courts. The canvas that she painted after the daughter of the Egyptian vice-regent, the harem beauty who stole her heart was last seen at an auction in Paris, sold by the sultan of Brunei two years ago. When the National Gallery of Denmark met with Pera Museum to collaborate on an exhibition of Danish artists in Turkey from the 16th century to 19th century, they were faced with many such questions.

"The general idea was to bring the images by Danish artists back to the place of their origin and to confront the historical reality of Istanbul - as known from other sources and as seen in situ today - with the imagery it sparked in visitors from a substantially different culture. The main focus would have been on the 19th century for which both the material and the sources are most abundant," wrote Mikael Bogh Rasmussen, the Queen's Reference Librarian, about his attempts to organize an exhibition at Pera also featuring Danish painters Martinus Rorbye, Anton Melbye and Baumann's son, Harald Jerichau, among others with theater historian Dr. Bent Holm, only to watch it stall over lack of knowledge and access to private collections. "These painters from successive and quite different periods in the 19th century and their different handling of Istanbul subjects would have nuanced the typical orientalist stereotype that one reads about in art literature and allowed for a new and more interesting approach to the reciprocal influence between the two cultures and their look at each other."