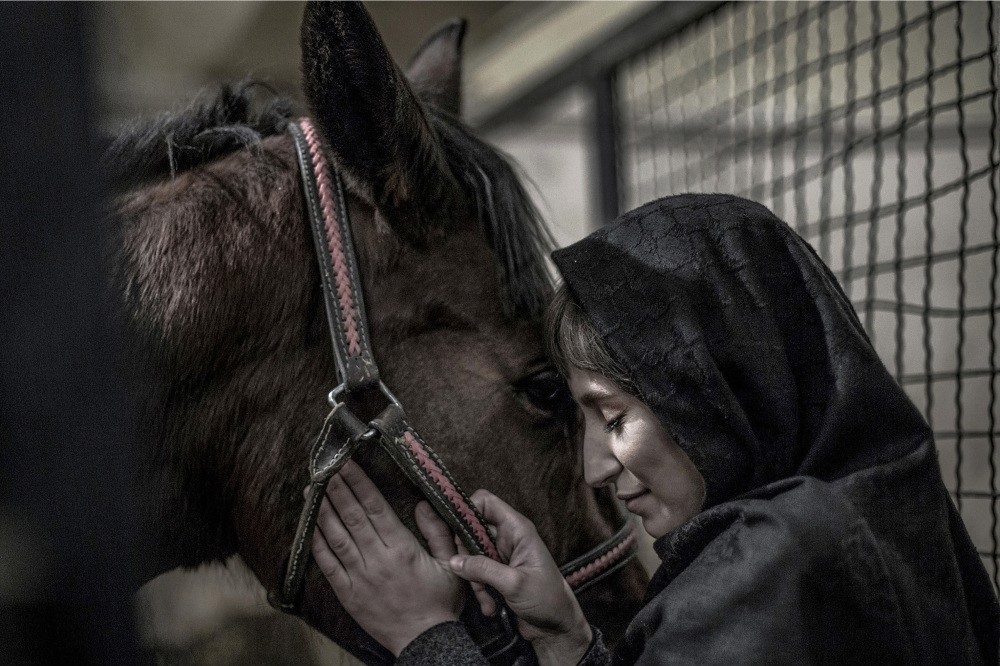 One of the many categories of the 37th Istanbul Film Festival, ‘No More Flowers,' features 10 films that depict stories of independent and strong women from around the world

Organized by the Istanbul Foundation for Culture and Arts (İKSV), the 37th Istanbul Film Festival runs this year from April 6 to April 17. There are various categories featuring 210 films in total. One of the most outstanding categories is "No More Flowers," which includes films with strong female protagonists. The category includes 10 films with stories of independent women who resist suppression. 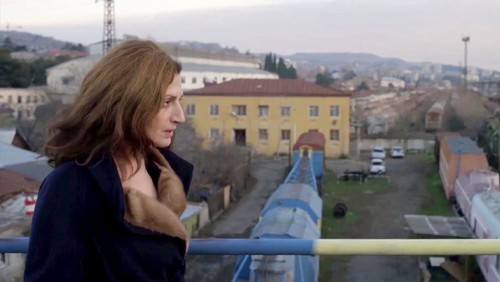 Having premiered at Locarno Film Festival, where it also competed for the Golden Leopard, Georgia's Oscar nominee "Scary Mother" follows middle-aged housewife Manana who decides to follow her passion. Dedicating her life to her family, Manana has wanted to write a novel throughout her life but had to suppress her dream. When she finally decides to follow her passion, she is willing to risk everything, both spiritually and physically.

"It is a movie about restrictions; on moral codes we learn and patters causing suppression," Georgian director Ana Urushadze said about her first feature-length movie, which has been awarded at many festivals, including Best Movie at the Sarajevo Film Festival, Young Jury, the First Feature-Length Award at Locarno, Best Female Actress at the Asia Pacific Screen Awards and Best Cinematography at Gijon in 2017. With absurd humor, it shows a perspective on creativity with a liberated female figure.

One of the most renowned TV and cinema actors in Iran, Rambod Javan directed his forth feature length movie, "Negar," which premiered and won Best Soundtrack at the Fajr Film Festival. Starring Negar Javaharian as Negar, the movie is a detective drama that keeps audiences glued to the screen until the final scene. Negar, whose father mysteriously and suddenly commits suicide, loses all her assets due to his debts. After a dream she has one night, she finds a very generous check in her hand in the morning. While Negar is trying to find the connection between the check and her father, dreams start meddling with reality.

Director Tonie Marshall tells the story of a senior manager, 40-year-old Emmanuelle, who is promoted as the head of one of the largest companies in France. On her path to the top, ambitious, brave and witty Emmanuelle has to deal with the boys' club at work and her constantly complaining husband at home. Will the power of men who are willing to try whatever it takes to stop this hardworking ambitious woman and who are not afraid to turn into monsters be able to stop her? "Number One," which premiered at Toronto Film Festival, is a corporate drama with an intricate plot touching on gender equality and hits the mark with actress Emmanuelle Davos in the lead role.

Sweeping the awards at the Brooklyn, Palm Beach and Arizona Film Festivals "The Sounding" focuses on Liv, who lives on a remote island off the coast of Maine and who after years of silence, starts talking in Shakespearian English. The neurologist brought to the island hospitalizes her to find a cure. However, instead of getting better, Liv turns into a rebel with a tendency for violence, taking the risk of remaining locked up for years. Director Catherine Eaton, who also stars in the movie, tells the story of otherness, which also references political clients. Written by Eaton and Irish playwright Bryan Delaney, "The Sounding" is an intriguing film at this year's festival.

Of Skin and Men

A woman who shakes the conservative yet Western social structure of Tunisia to the core, Amal is shocked by the sudden death of her husband who had a bright future as a photographer. Life takes her to places as a widow that she never dreamed or thought about. Yet, as an artist, she drives everyone mad with her daring and boldness and starts taking erotic photographs of men. Mocking concepts such as manhood, loyalty and vulgarity, "Of Skin and Men," is an aesthetic movie with a female perspective. Tunisian-French actress Hafsia Herzi shines in her role as Amal in the film directed by Mehdi Ben Attia.

"The emotions you are having are not your own, they are someone else's. You are not the cat - you are inside the cat."

How do we distinguish between mental illness and teenage tantrums, how do we separate the role from reality and where do we draw the lines of creativity? A teenager tries to continue her life with an illness that has captured her body and her mind, who is drowned by the love of her mother and who takes on a completely different character on the theater stage. Is she really Madeline when she is Madeline? Premiering at Sundance and starring Miranda July as the mother, "Madeline's Madeline," which includes an extraordinary performance by Helena Howards as Madeline, is Josephine Decker's third feature-length film and one of the must-see movies at this year's festival.

Children play on a beach dotted with parasols amid the sound of the water, the blue sky and the sun's rays. Ava is a child who is sleeping despite the crowds. She is only 13. Her soul wakes but her eyes are about to be closed forever due to a disease. While she is starting puberty, she seeks ways to deal with the problems awaiting her on this journey. Winning the Cannes SACD Award, where it premiered, "Ava" has an intricate storyline based on a coming-of-age story of a young woman. Director Lea Myisus portrays a complex yet visually skillful character in her first feature film. "Ava" won awards at the Montreal, Palm Springs and Stockholm Film Festivals.

So Help Me God

Judge Anne Gruwez from Brussels is a woman full of surprises and who always speaks her mind. Her methods for approaching cases and suspects are unusual and she gains a fan base for her appealing, intimate and uncompromising nature. The directors of this documentary, which follow Gruwez from case to case and tragicomically portrays the judicial system in Belgium, are Yeves Hinant and Jena Libon, the creators of cult documentary program "Strip-Tease," which screened in Belgium and France for 20 years. The politically incorrect "So Help Me God," which has a lot of humor and does not hold back, premiered at the San Sebastian Film Festival.

"Alanis" tells the story of a sex worker in Buenos Aires. When she is thrown out of her apartment due to inadequate and biased laws, she has to abide by the laws of the streets and tries to look after her child while trying to preserve her honor against racism and biases, but she gets sucked into the dirt with every step. Argentinian director Anahi Berneri does not apply any moral or social filters and draws a realistic, clear and extraordinary portrait of social collapse in her country devoid of feelings. Sofia Gala Castiglione's acting is also very realistic and her interaction with her real son throughout the movie is exquisite. "Alanis" won the Best Movie Award at the Havana Film Festival and Best Director and Best Actress Awards at the San Sebastian Film Festival. 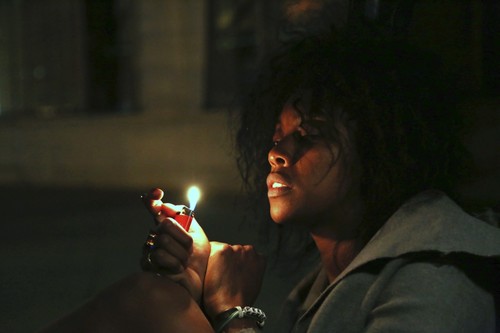 Milcho Manchevski created a masterpiece with "Before the Rain" in 1994, and his latest movie that jumps from documentary to fiction and from fiction to documentary, "Bikini Moon," follows a documentary team trying to turn a mentally-ill veterinarian into the subject of their documentary. Different approaches and genres are intertwined and Manchevski initiates a discussion about our age and the perception of reality of this time in a modern fairy tale on the relativity of truth and lust for exposure.

The 37th Istanbul Film Festival is running a series of films that tell the unique and striking stories of a range of iconic musicians who left their mark on the history of music, including Grace Jones, Oum Kulthum, Ryuichi Sakamoto and Eric Clapton.

Here are some of the movies included in the Musicians section of the festival. 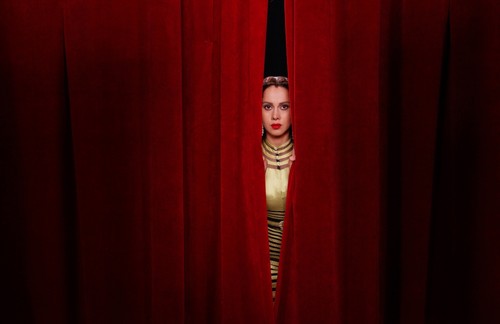 Directed by Iranian artists Shirin Neshat, "Looking for Oum Kulthum," follows the life of timeless Egyptian musician who is also one of the best representatives of Arab music. The movie explores her story through a women who wants to shoot a movie about her. The German-Austrian co-production premiered at the Venice Film Festival and Toronto Film Festival and it follows the legend and myth of the iconic artist in the Middle East.

The director, Shirin Neshat, will also be at the Istanbul Film Festival as a jury member for the Human Rights in Cinema competition.

Not just Japan's, but also one of the most original and esteemed composers around the world, Ryuichi Sakamoto is best known for the soundtracks for "Merry Christmas," "Mr. Lawrence," "Gohatto," "The Revenant" and "The Sheltering Sky." His won an Academy Award for Best Score from Bernardo Bertolucci's "Last Emperor." Directed by Stephen Nomura Schible, "Ryuici Sakamota: Coda," presents a humble and detailed portrait of the 50-year career of the musician known for his activism and concerts starting from the 1970s and 1980s, when he was a synth-pop musician, up to today, when he is trying out experimental electronica.

Grace Jones is a punk idol, otherworldly beauty, androgynous icon and a diva both on stage and the catwalk. Following Jones from Jamaica to Paris for five years, Sophie Fiennes, the director of an outstanding and extraordinary documentaries, turns Jones into both the star and the subject of the documentary. "Grace Jones: Bloodlight and Bami" premiered at the Toronto Film Festival and includes breathtaking concert recordings and private moments Jones spent in Jamaica with her family.

Eric Clapton: A Life in 12 Bars

One of the leading guitarists for decades, 18 Grammy award winner guitar legend Eric Clapton's private life is revealed in "Eric Clapton: A Life in 12 Bars," which premiered at the Toronto Film Festival. Covering both his musical and family life, the movie, directed by Lili Fini Zanuck, focuses on his career with The Yardbirds and Cream. Zanuck is second woman to win an Oscar to have also produced four Oscar-winning movies, "Driving Miss Daisy," "Mulholland Falls," "Cocoon" and "True Crime." This is not the first collaboration between Zanuck and Clapton, as Clapton composed the soundtrack for "Rush" (1991), which Zanuck directed.