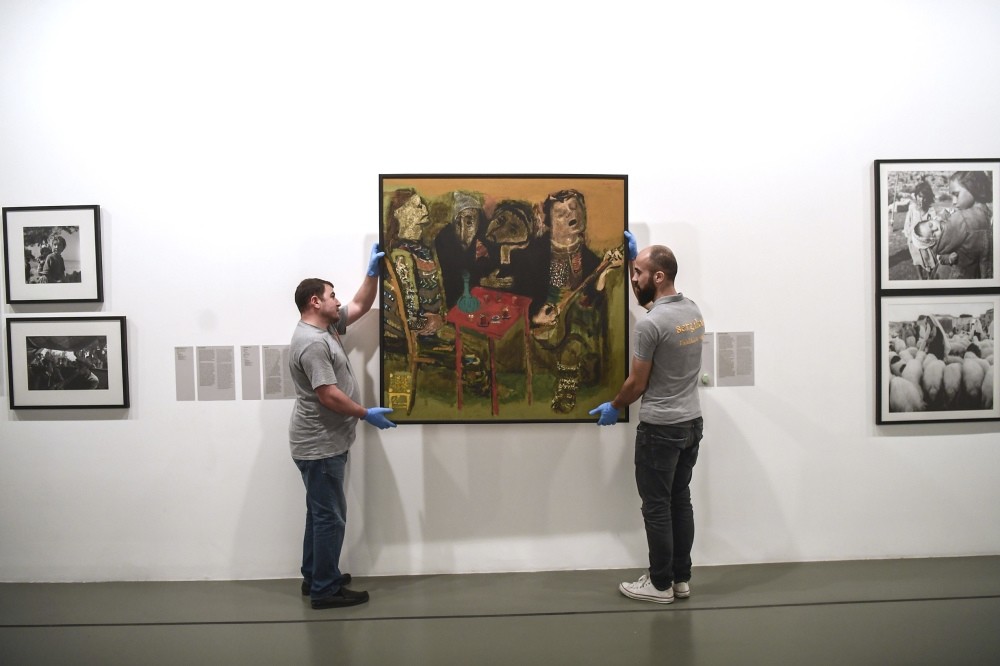 Workers take down a painting at Istanbul Modern, which will reopen in a historic Istanbul mansion in the central Beyoglu district in May.
by Apr 10, 2018 12:00 am

It's a busy afternoon at Istanbul Modern, Turkey's premier modern art museum, and the gallery is packed with visitors taking selfies or discussing the artworks in hushed tones.

Some pause in front of a massive canvas by celebrated German artist Anselm Kiefer, while others look in amazement at a masterpiece by Turkish abstract painter Fahrelnissa Zeid or gasp at iconic black and white images of old Istanbul by legendary local photographer Ara Guler.

Since opening on Dec. 11, 2004, Istanbul Modern, spectacularly situated on the Bosporus with a view of the Ottoman-era Topkapı Palace, has become a symbol of 21st century Istanbul, open to outside influences but proud of its past.

The rapid success of the museum was one of the reasons Newsweek magazine famously declared in a 2005 cover story that Istanbul was "one of the coolest cities" in the world.

But within a few days of the visit, all the artworks will have been taken down, carefully catalogued and put into protective cases.

The building, a maritime warehouse known as Antrepo No. 4 in Turkish and beloved by many Istanbulites since the museum's opening, will be demolished.

However it will not be the end for Istanbul Modern.

After closing its doors on March 18, the museum will reopen in a historic mansion in the central Beyoğlu district in May.

The mansion will be a temporary home until a new museum is built on the site of the old Istanbul Modern to showcase its collection to even greater effect.

The new building will be designed by Italian architect Renzo Piano, who was behind London's iconic skyscraper The Shard, and is expected to be finished in three years. Istanbul Modern's director Levent Çalıkoğlu admitted there was some sense of "hüzün" - the Turkish word for melancholy - over leaving the building that had been the museum's home for the last 14 years.

"Yes, in fact, we have a kind of melancholy and a nostalgia," he told Agence France-Presse (AFP) inside the museum, which was devoid of visitors as staff carefully took down and packaged the art.

"But a new future is in front of us and we have a completely different aim. This new building will bring a new vision to the art world and to Istanbul."

The opening of Istanbul Modern was supported at the time by President Recep Tayyip Erdoğan, then prime minister, who gave his approval for the use and refurbishment of the maritime warehouse.

Istanbul Modern is proud not just that it has attracted seven million visitors since opening but that they have come from right across the country's hugely diverse society.

And on one of the museum's final opening days before its temporary closure it was filled with Turks of all ages and backgrounds, as well as a sprinkling of tourists.

"There are things here that I am seeing for the first time, it's interesting and I appreciate this," said Gökberk, a 19-year-old who had come with his friends. Visitor Nesrin Aktar, a fan of the museum, hoped the revamp would go smoothly.

"We come to see the exhibitions, to nourish our souls, that really inspires us."