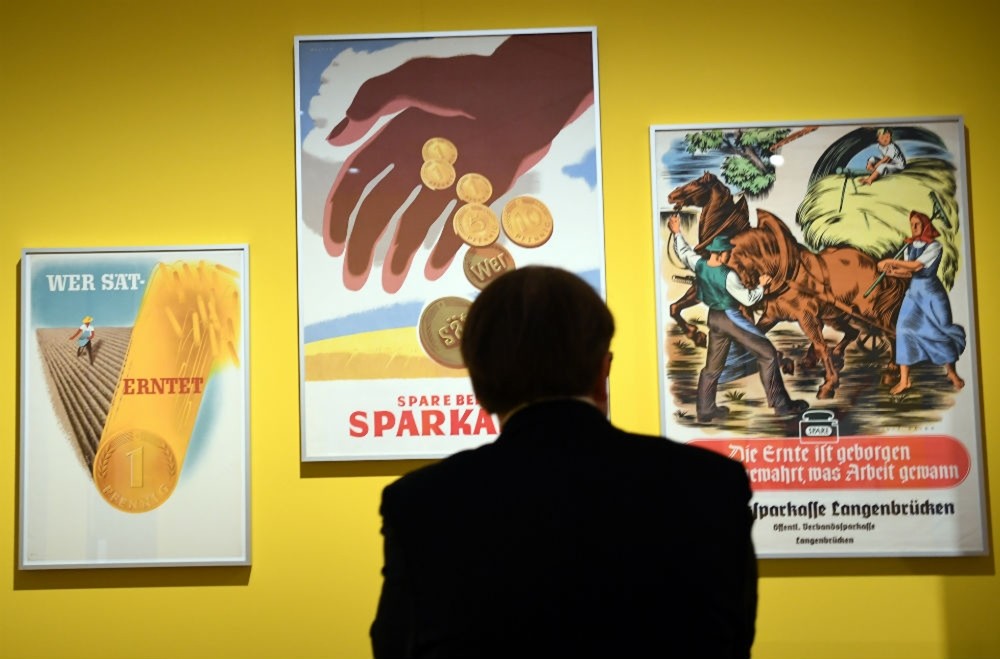 While the European Union gears up for another of its endless post-crisis bouts over spending, debt and deficits, Berlin's German Historical Museum has turned a microscope onto the mania for saving in Europe's largest economy.

"Queen of austerity," "German dogma," headlines from around the EU greet visitors to the baroque pile on the leafy Unter den Linden Boulevard that houses the museum.

All are relics of Berlin's insistence that eurozone members stick to strict limits on debts and deficits at the height of the currency bloc's post-2008 financial blues.

Politicians and the public have been puzzled by the rage from other nations, while Spaniards, Italians and above all Greeks have cursed Berlin for soaring unemployment and slashed government services.

To most Germans, saving around 10 percent of their income has long been an "unquestioned virtue" come war, inflation, famine or fortune, Gross said.

Witness to that fact are some 2.3 trillion euros socked away in savings accounts or under mattresses, according to a January report by Germany's central bank, the Bundesbank.

Curator Robert Muschalla said he deliberately wanted to provoke with the title of the exhibition, "Saving: History of a German virtue."

"The idea isn't to say that saving is good or bad, it's about opening a debate on a topic that is seen as self-evident in Germany... saving has become internalized into a habit," he explained.

To understand Germans' nest-egg neurosis, visitors must look back to the 18th century, when the building that today houses the museum was the arsenal of militaristic Prussia.

Like neighboring France, Prussia and other German states were roiled by emancipatory ideas spread by the Enlightenment thinkers of the time.

But "while the French carried out their Revolution [in 1789], the Germans invented saving" as the foundation of personal autonomy and a means to pay for education, Muschalla pointed out.

To a state that had asked citizens to fund its war effort against Napoleon by exchanging gold jewelry for iron rings, the savings system was a natural bulwark against enemies within and without.

Communist thinker Karl Marx raged in "Das Kapital" - a first edition of which can be seen among the exhibits - that workers' cash piles kept them invested in the capitalist system, giving them something to lose in case of a revolution.

And when World War I broke out in 1914, ordinary citizens' savings again helped foot the bill for the bloodletting.

At the heart of the exhibition stands the symbol of what came next - a replica of the wheelbarrows used to haul stacks of near-worthless banknotes through the streets during the hyperinflation of the early 1920s.

Adolf Hitler's Nazi party was quick to seize on the opportunity, placing "saving in opposition to lending," Muschalla said.

A "background noise of anti-Semitism" painted finance and credit as the province of their preferred scapegoat for Germany's ills, the Jews, he added.

Propaganda posters from 1938, five years after the Nazis seized power, hailed "those who work and save" as the guardians of "German tradition."

Under Hitler's Third Reich, a "Sparautomat" or savings machine was installed in many schools, allowing children to deposit pennies and pull a lever to mark their savings books.

Meanwhile, the regime began confiscating Jews' bank deposits in 1938, a few years before it began deporting them to forced labor and extermination camps.

After the Nazis' 1945 defeat, the new Federal Republic of Germany turned westward and became a thriving, capitalist economy.

But unlike Americans or Western European neighbors, the new Germans still shunned purchases on credit, hoarding their deutsche marks until they could afford a car, fridge or television, and keeping the savings machines in schools, minus the Nazi propaganda.

A poster preserved in the exhibition blares "Geiz ist geil" (Stinginess is cool), a slogan used by the Saturn electronics chain in the 2000s.

In a society still obsessed with discount supermarkets and coupons, saving is a "German pathology" lamented Die Welt newspaper columnist Henryk M. Broder in a video.

" 'Geiz ist geil' is really the worst phrase - except for 'Heil Hitler' - ever invented in this country," he said.