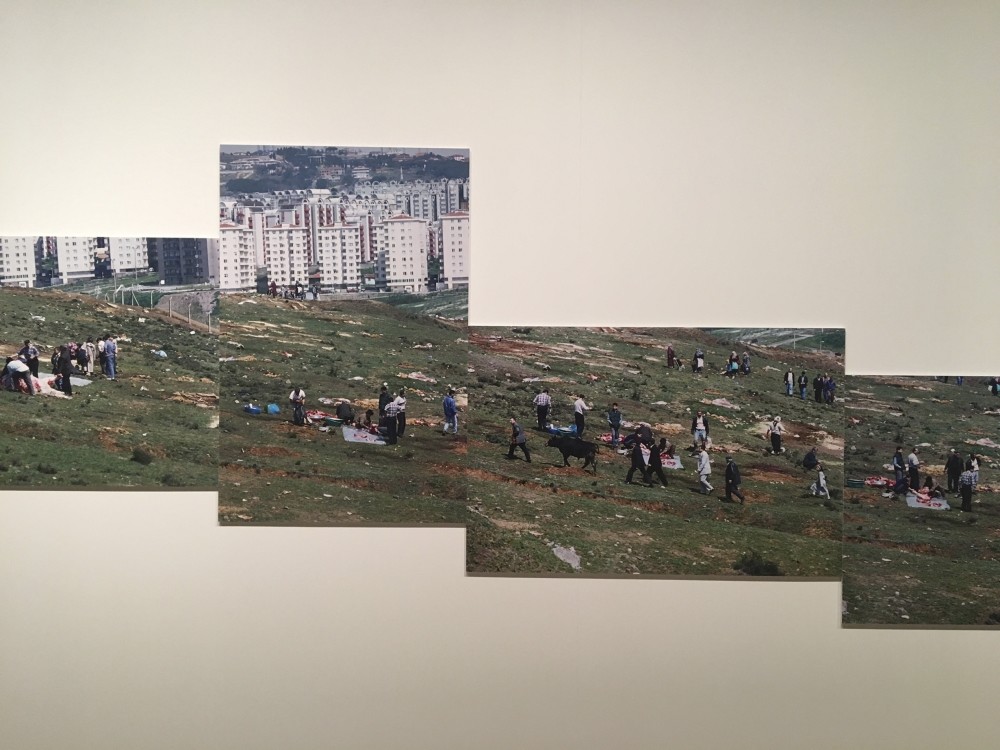 For his photographic installation u201cFeast of Sacrificeu201d (1997-1999), artist Bu00fclent u015eangar emphasizes the nature of urban transformation and its effect on society and tradition through repetition and breadth across the walls of SALT Beyou011flu.
by Matt Hanson May 01, 2018 12:00 am

For its reopening, SALT Beyoğlu is dousing its mass passersby with a glitch in the matrix perfectly timed for spring on the rampant bustle of İstiklal Avenue. The show is ‘Continuity Error,' a survey of artists Aydan Murtezaoğlu and Bülent Şangar, open until July 22

Two years ago, concrete filled one of the keyholes through which the people of Istanbul accessed art and examined life. Paradigms have since shifted. The largest Turkish metropolis has transformed, inside and out. To many locals, it is not the same city. Millions of annual visitors merge into the uncountable masses and experience no greater depth in the ancient capital than mere window shopping on İstiklal Street, an open-air, commercial, pedestrian mall known officially as İstiklal Avenue. It is a capitalist paradise, a utopia of consumerism for the global middle class. Yet, the place and its metaphor are not without occasional clearings of neutral ground, especially for those led to intellectual, creative reflection. One essential nexus that opens through to such introspective persuasions is SALT Beyoğlu, a pro-youth research complex furnished with a walk-in cinema, multilingual bookstore, world-class kitchen, winter garden and at least three floors of exhibition space to begin. As it reboots in the spirit of a nationwide, cultural resurgence in the old Europeanized core, there are flickers between the ones and zeroes, ghosts of misdirection that waver beyond the Hydra-like grasping of the mechanical industry and its illegitimate heir, digital technology.

The work of performance art

In that serial dysfunction, artists live, breathe, and return. They are two in the case of the SALT Beyoğlu homecoming on İstiklal, a fantastically cerebral pair named Aydan Murtezaoğlu and Bülent Şangar who double-handedly crafted the course of contemporary art in Turkey in the 1990s with unrivaled foresight, enough to garner sustained appreciation today to hold the center of the all-important, historic curation, titled Continuity Error. It happened on the way to the Forum, as the saying goes, lightly sourced in the farcical ancient Roman plays of Plautus. Interwoven around two rows of polished, maroon marble columns, performance artists enact the assembly line of a boutique clothing manufacturer. As one of five young role players explained, they will fold and present fashionable sweaters and shirts until someone approaches for a conversation. At that point, they become the performance art themselves, and in that way speak to the silence endured by factory workers, and manual laborers across the planet. The piece is a collaborative work by Murtezaoğlu and Şangar called "Unemployed Employees - I found you a new job!" (2006-2018). As the performers maintain impromptu conversations they emphasize a worldwide discussion prompted by a generation of workers who stand between the lines of invisible picketers who would work if there was work, or who are not fairly employed. 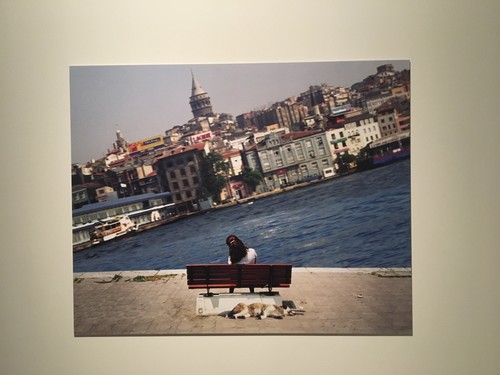 Aydan Murtezaoğlu is an inventive installation photographer with a sense of perspective apart from the normalized technicalities of her chosen medium through which she blends fact and fiction.

"Unemployed Employees - I found you a new job!" (2006-2018) is especially pertinent in the clothing sector, which has ever been at the forefront of globalization since trade expanded outward with unprecedented speed after the first wave of semi-automatic spinners replaced wheels with jennies and frames in the late 18th century England to birth the Industrial Revolution. Inside the hours of 2 p.m. and 6 p.m. (except Mondays), performing artists occupy the Forum at SALT Beyoğlu to review the contemporary contexts of work in a world where global youth movements are addressing underemployment through art. On the southern wall complementing the performance piece is an installation of perfumes, and abysmally cheap swag like that seen among everyday street hawkers. Behind it are finely detailed sketches of hundreds of working class people representing every imaginable walk of life waiting in line. The paper medium is divided in parts, as it is impressive in scope, lining nearly the entire length of the wall in the Forum. Finally, at the end of the line, a man does push-ups. Individualized sketches show men of the kind weighed and measured, faceless and burdened, balancing insecurely on ladders and beams. In another sketch, the monotony of the classroom is mirrored in the subordinate workplace.

The illusions of continuity

Before the exhibition ascends to the second floor above the Forum, a thin booklet is available to curious readers by the gleaming marble stairway. Its title is "Errata: Necessary Corrections for Continuity Error as a Matter of Coexistence." On page one, it reads, uncapitalized: "one should not believe those who say 'there are no hierarchies in art' before questioning their positions [...] one should not forget about the power of those who possess the right to make choices in art; and act accordingly." With that, the Forum segment of the exhibition concluded by the Walk-in Cinema (which then played the 1926 silent Japanese film, "A Page of Madness" with live electronic music by Sumatran Black). In the spiral of the stairwell on the floor shared with Robinson Crusoe 389 bookstore, the works of Bülent Şangar continue with a series from 1997-1999 shown in the Forum, first below with the piece "Cloakroom" and then an untitled work in a similar aesthetic style. From the start of the exhibition, the sense of continuity blocked, in error, becomes clear, particularly in the works of Şangar, whose "Cloakroom" shows a man overdressed while "Untitled" (1997-1999) sets the tone of repetition and its discontents. 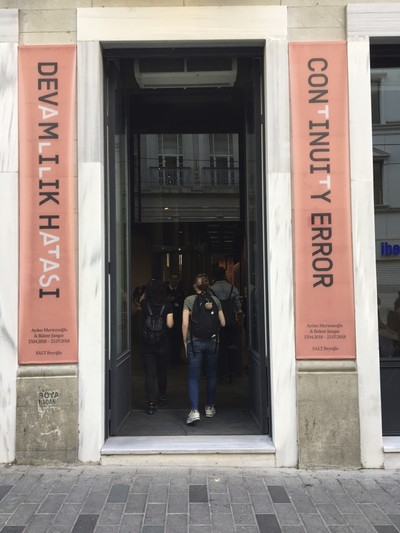 The entranceway to SALT Beyoglu on Istiklal Avenue reopened to coincide with the "Continuity Error" exhibition, a survey of artists Aydan Murtezaoğlu and Bülent Şangar from April 17 to July 22.

The initial early work by Murtezaoğlu is "English Course" (1995), indicative of a more pedantic, direct style through which to relay the conceptual value of objects when redefined and given new names and meanings. It is an antique furniture radio spouting vague audio with a stone tablet on top, engraved in black letters delineating a language lesson. The effect is surreal, out of place, a critique on the anachronisms of postcolonial education and the slow outdating of its transmission across borders. A short, quiet walk to the second floor of SALT Beyoğlu leads to a heartwarming portrait of a well-dressed girl standing on a bench in the Istanbul of 1969, as she smiles softly while a tanker rolls through the waves of the Bosporus behind her. The work, "6th Fleet Istanbul" (20016/1969) by Murtezaoğlu has the feel of a winter scene, as the composition draws from the iconic framing of Ara Güler, who has captured the soul of Istanbul and its people since 1950.

Murtezaoğlu shows her special knack for manipulated film with a couple of untitled works from 1999 and 2000, in which the cityscape bends according to the perspective of its human subject in focus. In the 1999 piece, a woman sits at a bench, and tilts her head while looking at Galata Tower and its environs, and while everything from the concrete boardwalk to the water remains flat, the Golden Horn and its shorefront neighborhood also appears at an angle. It has a particularly Turkish mood, something akin to "hüzün", a Turkish word with Arabic roots that signifies an undefinable sense of loss, like nostalgia only more optimistic, even if melancholic and desperate. The feel is comparable for viewers who enter a dimly lit cast of spotlights in the section displaying a series by Murtezaoğlu titled "Tour" (1993-1995). Its mix-and-match agglomeration of municipal artifacts previously appeared at Taksim Art Gallery for an exhibition in March, 1995, outlining the random quality of the travel experience from the perspective of touristic outsiders who would gawk at words that mean nothing. And with sharp, hungry eyes they are drawn to such strange incidences as the flight of an "Angel-Picketer" soaring above the "Tower."

The errors of progress

Throughout the "Continuity Error" exhibition, the sense of abstract confusion and intellectual impasse is striking to new viewers, especially as an exploration of provocative photographic installation. The works cover a range of dimensions, from the slightest wording to laboratory installations, and images both moving and still that span the breadth of multiple walls inside the spacious passages and dens at SALT Beyoğlu. In the hands of Murtezaoğlu, the unsettling and bizarre is irresistibly entrancing, also humorous with a light and edgy air. Her work, "Landscape" (1996) is complemented by a related video of white ducks swimming in a pool frustrated by a remote control boat. And comparable is "Feast of Sacrifice" (1997-1999) by Şangar, whose touches of shock-art through photographic realism pierce through to powerful observations about the Turkish urbanization and the reconstruction not only of its infrastructure, but of its people. Through his use of repetition, as in "Untitled" (Windows, 1997-2007) and "He who lives with his likeness dies from it" (1996), Şangar discovers and accents the overlaps where the uniqueness of life trends into social reality, only to dissolve into lived irregularities that are basic to worldly impermanence, though barely noticed, like a glitch, unfelt on İstiklal Street.