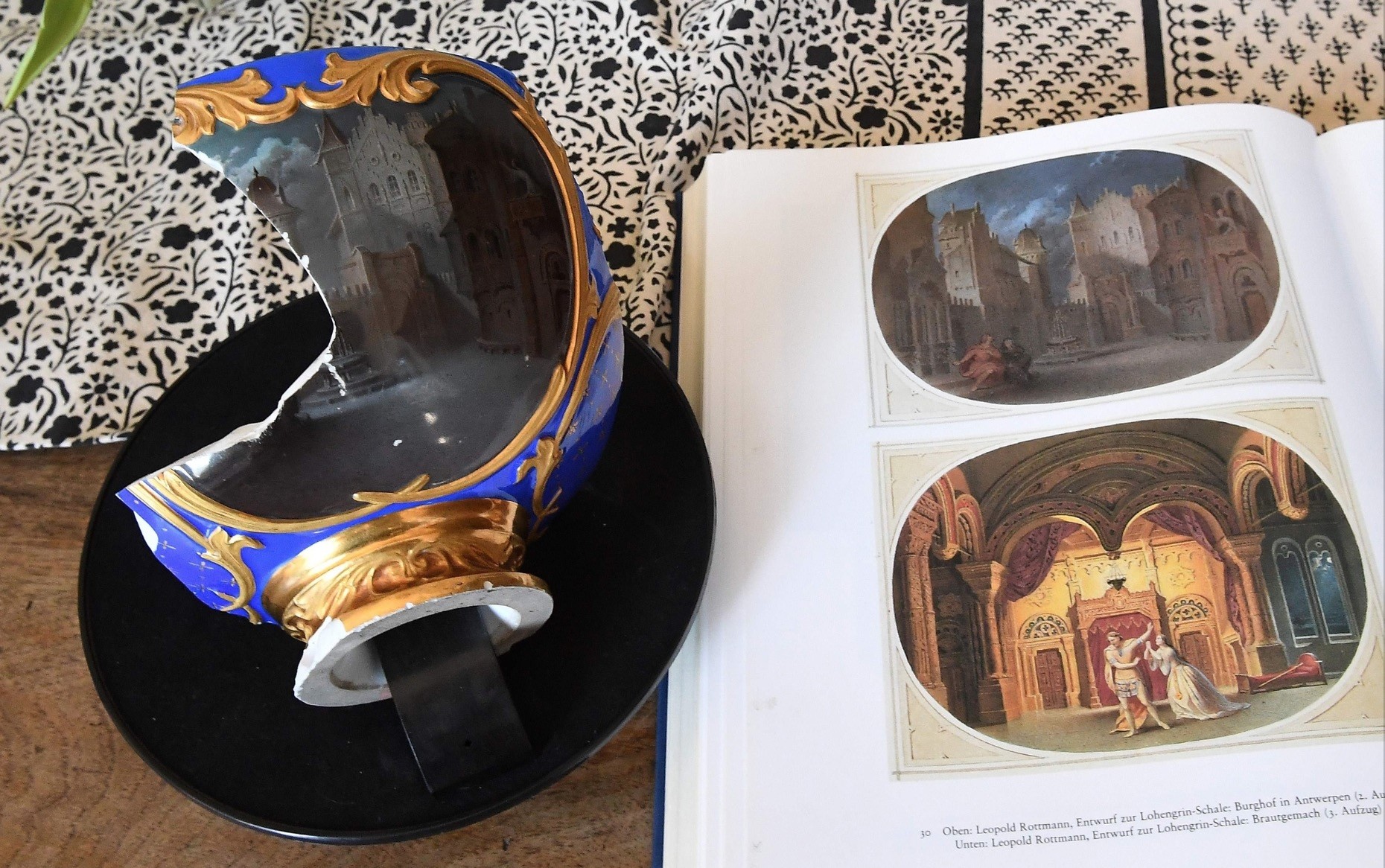 Kept safe in a silk-lined box by its Belgian "custodian" lies a piece of the historic legacy of German composer Richard Wagner that was nearly lost forever.

The Lohengrin vase, made of porcelain, was given to Wagner more than 150 years ago by Ludwig II, the "mad king" of Bavaria, whose passion for building fairy-tale castles was matched only by his love of Wagner's operas.

It was believed lost after Allied bombing in World War II destroyed much of Bayreuth, the town where Wagner built the legendary theater that now hosts an annual music festival.

But one fragment emerged after the war and was taken to the Belgian capital, Brussels, in 1949, where it has largely remained out of sight in the intervening years.

A group of Wagner devotees recently received a special viewing during a production in Brussels of the opera "Lohengrin" - the work that first bewitched Ludwig - and an Agence France-Presse (AFP) reporter was given a rare glimpse.

Patrick Collon, the renowned organ maker and art expert who now owns the fragment, said that "Ludwig was barely 18 years old when he started thinking about this vase, and he obsessed about it for six months. His diaries are full of it."

"After Ludwig became king he sought out Wagner, who was hiding from his creditors, all over central Europe. He found him a year later and gave him this vase in May 1865 for his 52nd birthday," added Collon, 75.

Saved from the ruins of the defeated Nazi Germany in 1945, the fragment at first looks insignificant, consisting of just the blue and gold base of the urn-like vase, and part of one rounded side.

But it sheds an intriguing light on the extraordinary friendship between the young Ludwig and the older Wagner.

The eccentric Ludwig is best known for designing the fantastical Neuschwanstein near Munich which served as the model for Disney's Sleeping Beauty Castle.

A minor king under whom Bavaria lost its independence to Prussia, Ludwig has nevertheless gone down in history as a patron of the arts, especially of the equally erratic Wagner. Ludwig was just 15 and infused by the old German legends when he first saw Wagner's "Lohengrin," based on the traditional story of the Swan Knight, and which later became the inspiration for Neuschwanstein Castle.

"It was Ludwig's first creation. He didn't make it himself but he imagined it, he dreamed up the scenes that were painted on it by his drawing teacher," the German landscape painter Leopold Rottmann, said Collon. Rottmann's watercolors of the receptacle - the only surviving evidence of what it looked like in full -show four scenes from the opera and have a lid and handles in the shape of a swan.

The fragment in Brussels shows a gilded swan, the tragic heroine, Elsa, on

a balcony, and the two villains Telramund and Ortrud. It is the only piece that survived the Allied bombing of Bayreuth on April 5, 1945. Two other similar vases - a Tannhaeuser Cup and a Flying Dutchman Cup - were destroyed on that day.

"It was said that it had disappeared and that nothing was left of it. But in 1949 the Wagner brothers (Wagner's grandsons Wolfgang and Wieland Wagner) were able to get a piece in a pretty box to a Belgian benefactor," said Collon.

"At the end of her life, she gave it to a musician friend. When the friend died it was passed to me."

The benefactor, identified by Collon only as Juliette, contributed to the post-war reopening of the Bayreuth festival in 1951 and was nicknamed "Joan of Arc" by the Wagner brothers.

The Brussels fragment is an object of fascination for music lovers.

"A smart friend once said to me: 'in the end, it's moving because it's broken,'" said Collon.

"This fragment has survived all the horrors of war."