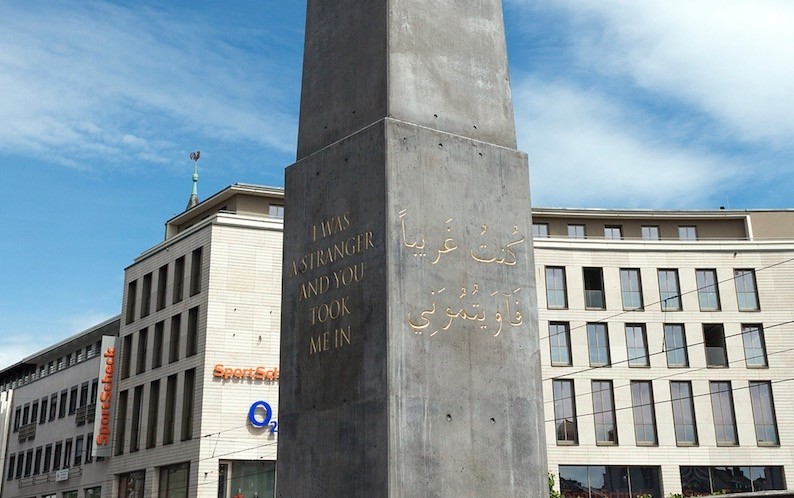 The local council in the German city of Kassel is due to decide Monday what will become of a 16-meter obelisk that honors "strangers and refugees."

The monument was erected in the city center for last year's "Documenta" contemporary art exhibition.

The concrete column, created by U.S.-Nigerian artist Olu Oguibe, currently stands on a square in Kassel with the words, "I was a stranger and you took me in" written in gold text in German, English, Turkish and Arabic on each of its sides.

where it is, move elsewhere in the city or vanish from the cityscape entirely after it triggered a debate about the value of art and a suitable location for the obelisk.

Pieces of art featured in "Documenta," an exhibition held in Kassel every five years, often become popular among locals and are purchased through donations. But just one day after fundraising began in late January for Oguibe's artwork - priced at 600,000 euros - a man painted the words "600,000 euros? Are you crazy?" onto the obelisk.

While the city wants to keep the central Koenigsplatz square free for further exhibitions, the artist has said that the obelisk was only "designed for this location."

The Kassel fundraiser ultimately fell short of its target, in the end raising only 126,000 euros. Oguibe still accepted the sum, however, and proposed a compromise on the matter of its location.

The session of the city council will look at three proposed actions for the artwork, which range from dismantling it to leaving it as is.