The dissolution of boundaries: ‘Boundary/Less' at Istanbul Literature House 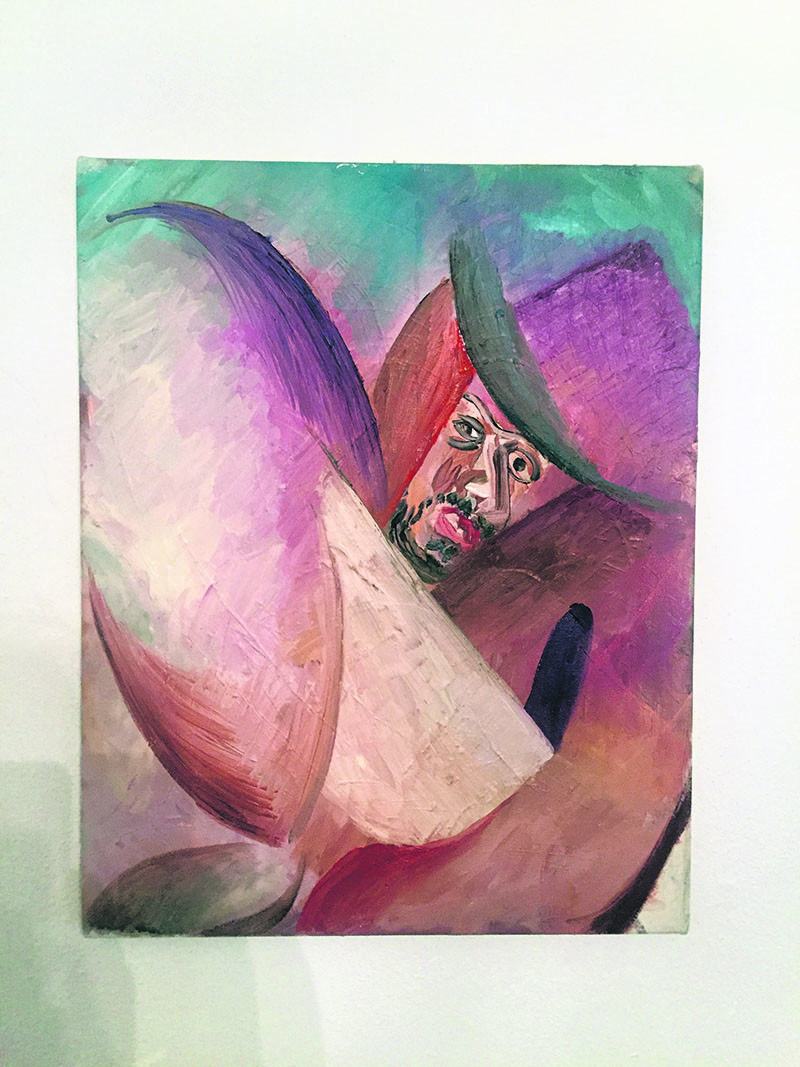 Fresh with the pine scent of the bare, natural wood flooring aromatic and pungent on arrival during its lively opening last week, Istanbul Literature House inaugurates its physical awakening with the show ‘SINIR/SIZ,' translated literally as ‘Boundary/Less'

The total range of visible colors appeared, an unstained spectrum like a miracle from end to end of the social horizon, as a comradely, outgoing crowd of talkers and lookers warmed up to each other and joyfully packed into the polished, summery airs of Istanbul's nostalgic core district of Beyoğlu, basking in the reflecting gleam of its brilliantly restored white marble of Levantine facades, lush and verdant with overhanging limbs, flowery dresses and patterned shirts, trendsetting statements and fashion crimes alike and all-inclusive, turning up smiles by the seasonal graces of a city peaked with the late June sun of the northern sky.

It happened on the way to a new spot named after the old "kıraathane" of Turkey's traditional street culture. The stairwell began to rise in the dim entranceway with an explanation for newcomers and millennials. As the sign read, kıraathane is a noun, for the furnished coffeehouse where hot, caffeinated beverages are served aplenty, and the number of available newspapers and magazines are kaleidoscopic, diverse as the region and its people in countless, multiform heaps. The word itself goes back to the 19th century, an Ottoman loan from the Persian and Arabic, "kıraat," meaning a place for reading and also for Quran pronunciation lessons. Finally, "khane" is taken from the Persian for a house or building.

With that, the stylish, emerald-hued font of Kıraathane Istanbul Literature House came out with a fantastic new presence for the downtown scene. It was a sign of hope, of a changing of the guard so to speak, a cultural paradigm shift of possibility. Inside, it was manifested as two brightly lit floors filled with artwork by 18 individuals and collaborations in a tantalizing variety of mediums.

A collective transformation Sketch artist Özgur Can Taşcı exposed the inner reaches of a psychological landscape for his work "Scene II" (2018), bursting with uninhibited human life. In the midst of crumbling, misshapen stone towers and darkened huts, a sweeping bustle of figures played in the fields of the Rabelaisian imagination. Coursing with the venous stretch of outstretched peoples of every type and size and intent, it is an ambitious visualization, set to relatively simple material and created entirely by ink pen on roughly cut paper. Sharing space with his more archaic vision is the perfectly contemporary "Untitled I" (2018), a pair of photo luster prints by Enes Ka and Cansu Yıldıran made with a clean and glossy design aesthetic, only to provoke a more challenging experience for those unsuspecting, soft eyes wandering in search of manufactured beauty in the manner of mainstream advertising.

In front of the elegant, bay window where a wild, urban growth of leafy greens poked through to cool down from the simmering air, a 40 minute, Super 35mm color film played, "Suddenly" (2018), by Gizem Bayıksel. Although powerfully timed to the cultural moment of the here and now, it mused on the preliterate past by exploring the nonverbal poetics of nature in a Polish forest. A voiceover could be heard with the looping video for those impulsive and curious enough to wear a prepared set of headphones: "You see, I keep thinking that what we need is a new language, a language of the heart..."

The artists at "SINIR/SIZ" (Boundary/Less) grapple with the transitions of youth. For example, the mixed-technique artist Elif KK dialogues with her family's heritage and its overlap in the present with her series of five works on paper, made in the current year. With titles like "Nazar" (Evil Eye) and "Ergen Alevi" (Adolescent Fever), she adapts her personal experience of historic Turkish motifs into evocative and fantastical depictions of power animals and anthropomorphic figures locked in otherworldly backgrounds, illustrating the aspirational symbols of life as a young artist.

Similarly, though more emphatically in the realm of aesthetics, the Iranian technical, Rapidograph pen drawer Jaleh Nezamdoust explores her rich Persian lineage and its innate, imaginative creativity, as in the geometrical patterns of its Oriental signature, the folkloric relationships between humankind and wildlife through the lens of a kind of archaist feminism. Her work is entrancing, as deer are adorned with symbol-bearing necklaces, and stare unshaken into the eye of the beholder, where a lone woman immersed in sinuous vegetation cradles a small mammal in her arms, wrapped in translucent curtains, standing tall atop lavish tiling decorated ceremoniously with a single patch of fertile, growing soil.

"The 'SINIR/SIZ' exhibition shows us that there are always opportunities for young artists to produce and show their art outside of the mainstream art scene. Young artists often find themselves stuck in competitions and galleries. 'SINIR/SIZ' proves that alternative initiatives give much more space for them," said the Istanbul-based art writer Kültigin Kağan Akbulut, who attended the opening with proud admiration for his fellow creatives. "Elif KK underlines the differences between her and her mother, who has a traditional background. Elif KK also points out how she embraced her mother's customs in her drawings. Jaleh Nezamdoust depicts Iranian mythology, from her perspective as a young woman. And Nezamdoust, as a refugee living in Turkey, shows that there is no limit to making art."

The art of difference

Clearly representing the cusp of creative maturity, SINIR/SIZ shines with unapologetic youth and experimental dash. The oil painting of Nazım Ünal Yılmaz, for instance, is a welcome return to the artistic company of an elder medium, although its focus has immediate gravity. Its title is loosely translated as "The Odd One Falling from the Stairs" (2018). It has an early 20th century throwback feel, out of a Cubist daydream, as a face peers from the nebulous wash of tints and shades coalescing against unhidden brushstrokes. With like effect, İlhan Sayın's delicate watercolor, "Aysel" (2016) is a charming portrait of an older lady of noble frame, pearled and crowned with a courtly headdress, bedecked in silver, fuchsia and lime tones matching her elegant glasses as she looks up, an ageless, intellectual queen of the faint world behind her.

The "Untitled" (2018) acrylic painting by Nisa Şenol reflected the outward style of the onlookers and contributors who kicked off the show to demonstrate the flowering of contemporary identity in a city, country, and world that increasingly seeks inner freedom from dysfunctional social norms by making and showing artwork that affirms difference, and glorifies the beauty of all regardless of which direction they tend to pursue in life on the path to happiness, inspiration and community. It's a theme also captured by another acrylic work, equally titled, "Untitled" (2018) by Elif Tekneci, who poses a setting where a couple lounge along the branch of a spotted tree. They hang colorless, as outlines, stretched almost lifeless over the stark, black and white offshoot from the wide trunk. Below there is an abstract space of earthy brown, while above, the area is filled with a subdued blue. While cartoonish and unreal, its graphic metaphors speak of a generation held between two artificial contrasts, groundless, unsheltered, yet wholly present, alive and naturally untamed.