A whimsical white house exhibit sparks the imagination in Washington 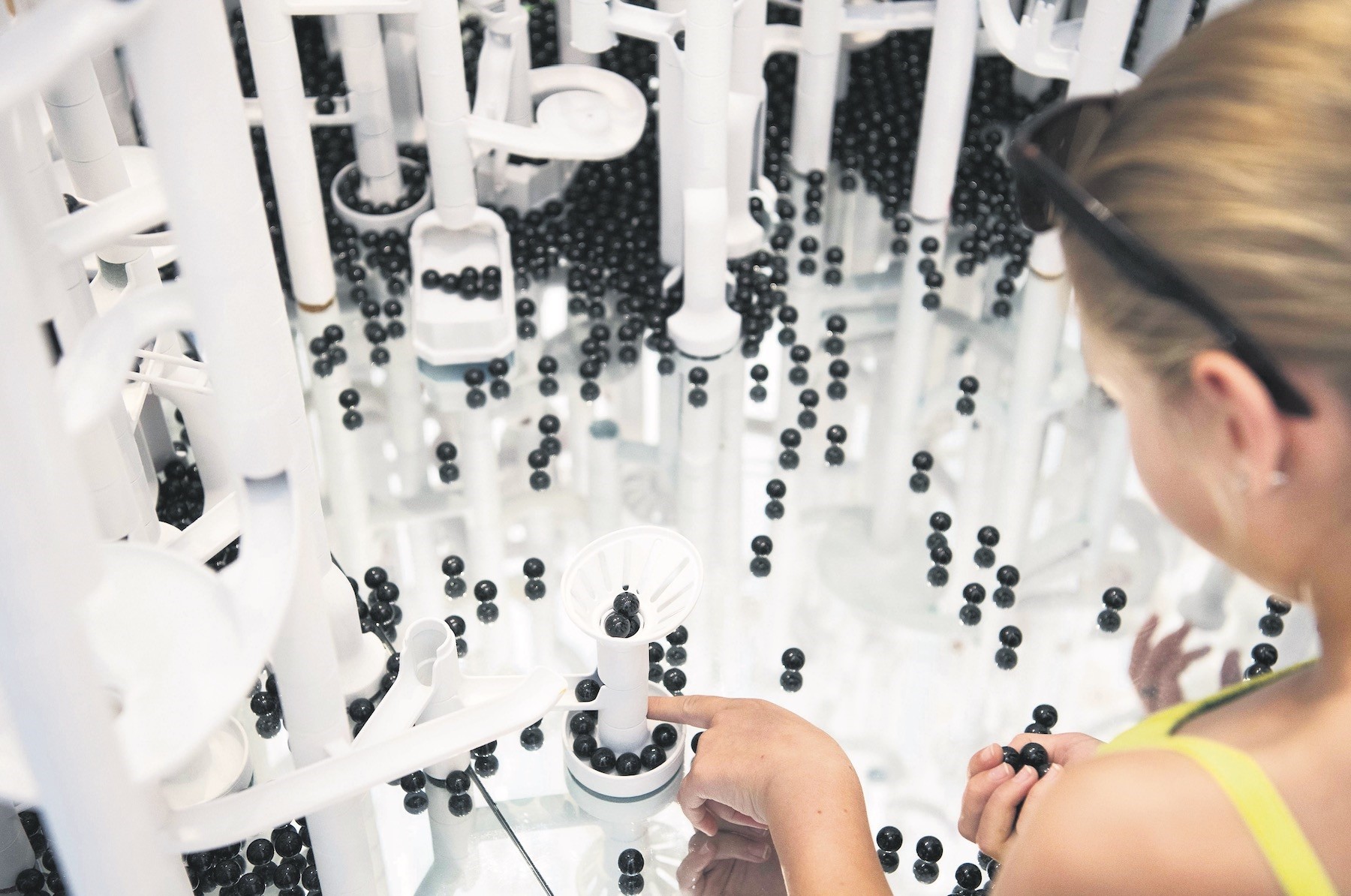 The idiosyncratic group, which sees itself as creating neither art nor architecture, but rather something in between, invites Washingtonians to immerse themselves in a tactile show that captivates with a sprinkling of whimsy.

"We are looking to make architecture accessible and engaging. Part of doing that is to integrate this concept of play," said Alex Mustonen, who co-founded Snarkitecture with Daniel Arsham. Ben Porto joined the pair in 2014.

"We like people to experience architecture and environments in ways that children might experience them," he said. "Ideally to let your guard down to approach something in a new way."

Visitors enter the free-standing structure filled with interactive pieces through what looks like a primitive cavern entrance, created by hammering and chiseling away at a solid piece of EPS (expanded polystyrene) architectural foam.

A carved out skylight appears after clambering through one of the openings, the tightly packed foam beads crunching beneath your feet.

Forced perspective, an optical illusion that makes objects appear a different size than they actually are, gives an impression of depth in "Playhouse" (2017), scaled for adults in front and growing increasingly smaller for children.

In the larger house, wall shelves emerge from excavated forms, a tilted white oak chair becomes usable thanks to a tapered black marble stone and a cabinet that looks cracked open at the center is completely functional.

"People could take home that the most normal and simple things can be looked at in different ways. This is a sign of (creative) freedom and freedom is the seed of the future," said Milan-based curator Maria Cristina Didero.

Working mostly in monochrome tones is "like a tabula rasa where you are open to everything," said Didero.

The main structure looks like a typical American house, complete with white picket fence – except this one was built with EPS foam.

The precisely milled siding, gutters and roof eventually dissolve in an irregular pattern – as though chomped off by some large, hungry animal – to reveal the frame and rafters beneath.

It's a "balance between precision and looseness," Mustonen explained.

One of the highlights of "Fun House," the fifth in the museum's annual Summer Block Party installations that runs through Sept. 3, is a kidney-shaped pool.

After dipping in some 175,000 translucent balls, visitors can lounge on beach chairs under parasols, white Astroturf mimicking sand all around.

It's a new take on Snarkitecture's uber-popular 2015 installation at the museum, "The Beach."

While "Fun House" is sure to be an Instagram hit, Mustonen encouraged people to also lift their eyes from their tiny screens to "appreciate the moment and have a more physical, tangible, tactical, memorable experience."