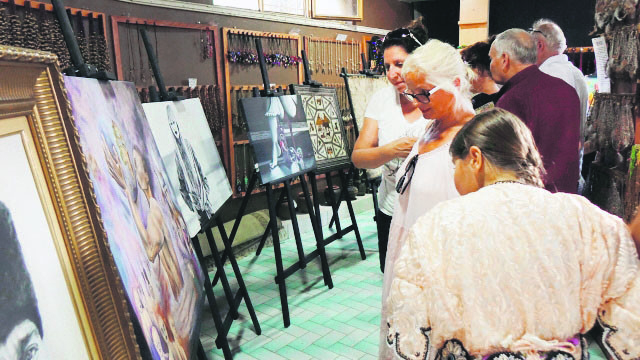 "The 27th International Group Exhibition," held in the memory of artist and sculptor Selim Turan in Balıkesir province's Edremit district, was opened at Alibey Kudar Ethnography Gallery on the foothill of Mount Ida.

The exhibition, which opened at the museum that was awarded the Golden Heart by Azerbaijan International Dede Korkut National Foundation, showcases the works of 69 artists from five countries.

Saying that the opening day was also the anniversary of Alibey Kudar Ethnography Gallery's establishment, Aziz said, "We invited artists from Azerbaijan, Uzbekistan, Ukraine and Russia. The works of these artists are on display at the exhibition. Also little Azerbaijani and Turkish children participated in the exhibition with their works."

Aziz said that he created 30 paintings for the 100th anniversary of Azerbaijan's establishment.

Elvira Adzhibaeva, who participated in the exhibition from Russia, said that she came to Turkey on the invitation of Alibey Kudar Ethnography Art Gallery.

Noting she has some works at the exhibition, Adzhibaeva stressed, "I painted the Black Sea and the cold of Russia in my paintings. Our ancestors lived in these lands. I am happy to be here."

Alibey Kudar Ethnography Museum Director Mustafa Selim Kudar stated that they have brought together the works of 1,164 local and foreign artists from 17 countries at 121 exhibitions and art lovers to their gallery to date.

Remarking on the paintings of 69 artists from Russia, Uzbekistan, Azerbaijan, Ukraine and Turkey which are on display, Kudar said, "We are honored to organize an art feast in the memory of Selim Turan for the 27th time. We present our respect and happiness to Azerbaijan on their 100th anniversary."