Business as unusual: A trio of exhibitions at Pilevneli Gallery 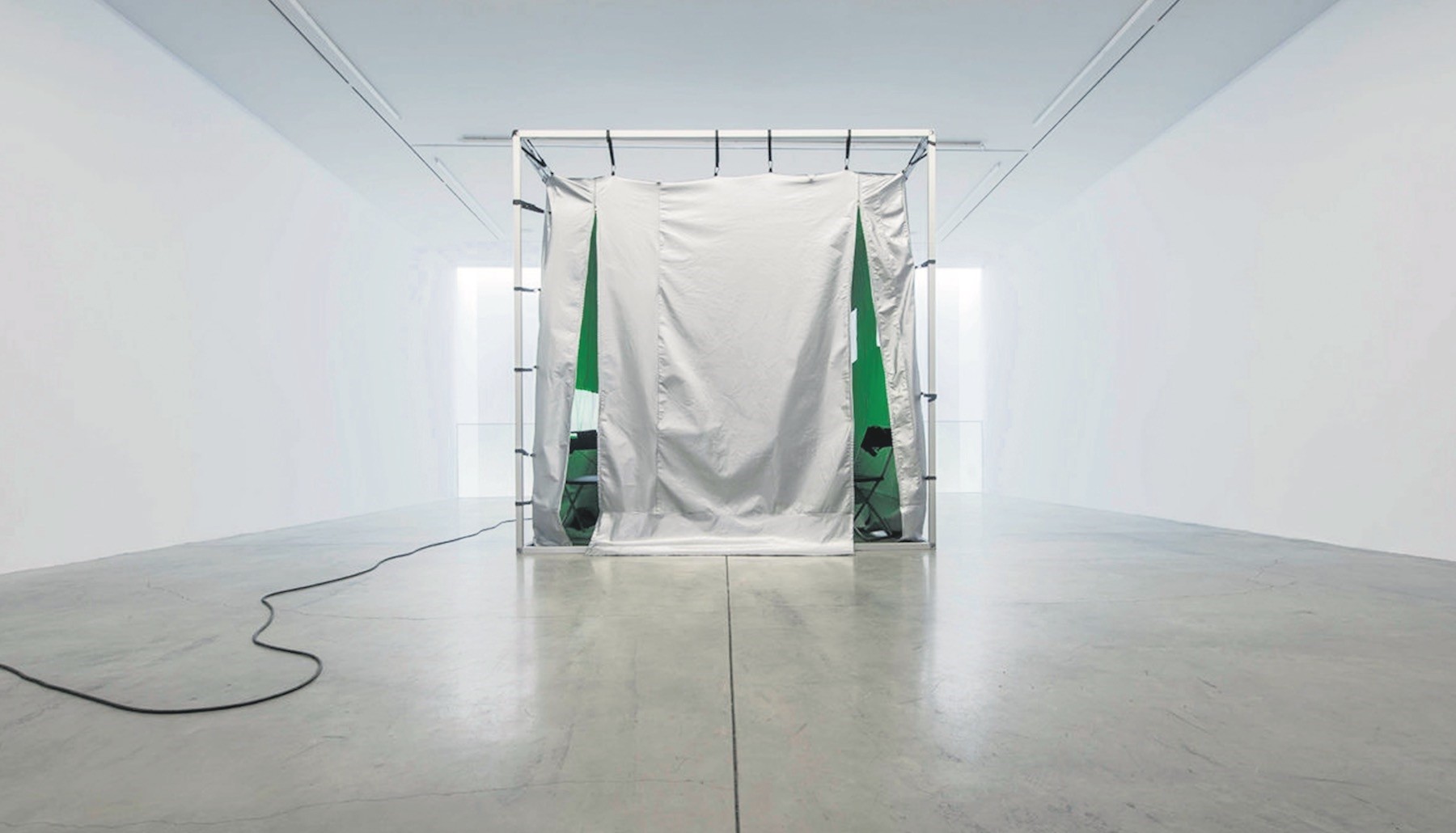 The current exhibitions on display at Pilevneli Gallery showcase Bora Akıncıtürk's ‘I'm So Happy Because' at the entrance level, Evren Tekinoktay's ‘Lotus' in the basement room and Can Sayınlı's ‘Rugs and Kilims' on the first floor. Ending on July 21, the exhibitions showcase a stunning trio of diverse artistic capabilities

The exterior of Pilevneli Gallery has the sophisticated look of high architecture. Facing the constant and dusty bustle of Irmak Avenue, it has a minimal, cubist pattern of long, black, vertical grating visible between even, lightless gaps. The designer building appears unfazed by Istanbul's relentless weathering, as it withstands incessant blasts of midsummer heat.

From its skillfully conceived storefront, oblique frames lunge out into the churning smog to train the minds of passersby with a pure visual exercise of postmodern aesthetics, contrasted with the industrial power of the gargling inner-city freeway. And yet, the stylish facade is nearly undetectable, being entirely distinct from its surroundings of spires ascending to Istanbul's religious heights, as from the peculiar steeple of the neighboring Evangelistria Greek Church, and the pearly new complex of Yenişehir Mosque about a hodgepodge of construction outfits fuming along the buzzing artery.

Inside, the raw, unfinished concrete walling is smooth to the touch, alternating with patches of bare brick, drawing eyes into a fashionable revision of history. Through the entrance floor, and up stark, metal staircases, the spare emptiness of the gallery is almost bleak except for the loud ambiance of its intent: To show world-class art.

Off-white paint gleams under pale, yellow light bulbs, exposing the cracks in the plain, factory flooring. Square in the middle of the room down the sole introductory hallway is a silvery, reflective cube made of tarpaulin, lit from inside. It is a wholly impermanent structure set dead center to furnish the blank vacuum of gallery space. And the open slits at its sides beckon with a silent humor. Within the mysterious, infinite enigma, there are places in places, where worlds live and die in opposition to the encompassing vacancy outside. 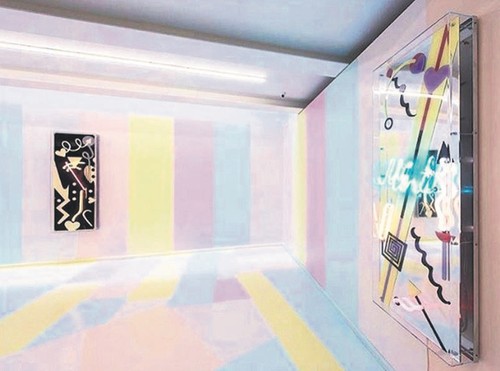 The artist Bora Akıncıtürk installed the piece, "I'm So Happy Because" after a message he received from a WhatsApp group. The exhibition notes trigger emotionally potent phrases like, "peer pressure," "missing out," "privileged millennial," "brutal expectations," "disinformation and depression," "minimal conformism" and "tiny bubble." These are adequate expressions by which to assess the hurricane blend of private effects tossed about under the reflective tarp. It is a hyperreal dystopia born of the mainstream 21st century worldview, overgrown from what the American intellectual Cornel West called "weapons of mass distraction." A lecturer of repute who's also mostly an outspoken critic of racism, he warned of the dangerous overuse of media gadgetry, which everyone loves to hate for its global dissemination, but that on a deeper level exploits the fragile vulnerabilities of youth.

A stained, uncovered pillow is lone as an island, separated by the cold, stone ground, away from thin blankets smeared with cigarette butts and crushed pretzels as the littered refuse of the convenience store lifestyle is laid to waste. Liters of water are half drunk and contained in a white plastic bag. Broken cups and crumpled bottles are only some of the varieties of store-bought packaging and urban riffraff. It is an aftermath bursting with all of the knickknacks of contemporary 20-somethings blinded by dizzying fits of needs and starts; filters and papers for rolling tobacco, the containers and wrappings of takeout food, unmaintained sports gear, molding classic books, and the whole span of domestic affairs run dry to sudden, total decay.

Akıncıtürk's work features "Extinction in Four Movements" (2018), a short video collaboration with Berk Çakmakçı. It's a satirical montage seemingly ripped from shared WhatsApp files, the stills and selfies of a generation forced to repeatedly imagine and emphasize the dominance of human omnipresence over nature and each other. At the same time, it is about a generation bullied by corporate interests disguised under popularly accepted harassments and invasions of privacy, constantly pressed to perform mediocre acts of creativity bound within the preprogrammed channels of commercialized communication.

"I'm So Happy Because" speaks of that generation, increasingly prodded with trendsetting insults to all forms of intelligence, promoting anti-intellectual humor attached to the overarching zeitgeist that is committed to benumbing, artificial saturation. Consuming culture itself without the means or wherewithal to establishing truly creative reciprocity, they abuse metaphysical addictions through tools of narcissism that shamelessly brainwash them into virtual identification with an imposed collective memory.

Retro is never out of style

Down below, the underground gallery floor screams of the 1980s with the stereotypical colors of its budding, electronic heyday, when pasty hues of pink, yellow, orange and blue painted the faces of post-punk concertgoers and raving fashionistas fearlessly out to have fun, as they lavished themselves with deep purple lipsticks and glamorous, glittering hairspray. Originally from Copenhagen where she studied at the Rietveld Academie, Evren Tekinoktay's art began from the techniques of collage. She later explored the form of the body in familiar, visual languages, recycling images of its parts as objects to be consumed and transformed. 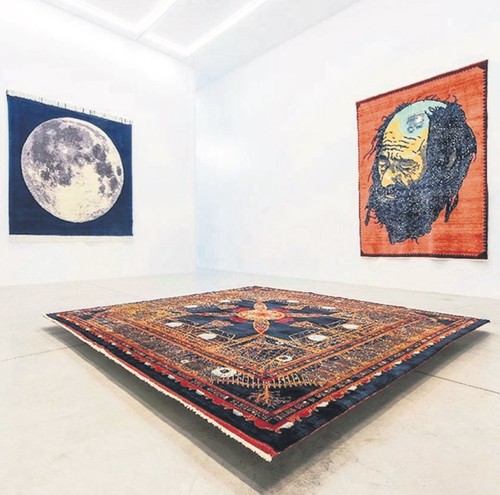 Her exhibition of five, equally-sized rectangular works at Pilevneli Gallery is titled "Lotus," after the mythical, symbolic beauty of the flower as a visualization for spiritual enlightenment, with its muddied roots shooting up through the underworld of suffering into the water and sunlight of soul clarity and holistic awareness. She delights in the twisting, tubular forms of neon glowing over cartoonish shapes akin to pop-art abstraction.

In one, a perfect heart revolves, as in a kinetic sculpture. Its whirring quietly whispers to the room, telling her best-kept secrets behind the mechanics of artistic expression. Her pieces have a simple and delightful joy, a whimsical grace, as they appreciate an effective, three-dimensional tone with dangling, scribble lines stylized in riveting ways, reminiscent of the vibrant, brushstroke figures that Miles Davis painted late in his life.

A weave of fractals

The virtuosic intricacy of Can Sayınlı's silk and wool rugs are evident with a simple glance. Its first impressions are liable to make everlasting, mental imprints. His pieces are entrancing, tapestry-like, and irreverent considering the subject thematics. He weaves everything from an amanita mushroom to a portrait of the eccentric Muzaffer Sarısülük, to the full moon and back over powerful abstractions. His neo-traditional motifs recall visionary tribal signatures woven into the fabric of life by peoples like the Zuni of the American southwest, or the Shipibo of the Amazon, spanning the gamut of indigenous and ancient means to recording time and life by the multigenerational repetition of collective signatures as visual ideas.

Sayınlı exemplifies contemporary archaism with peerless grab. It's a creative stream often pursued particularly by Turkish artists in search of the roots of culture through the techniques and practices of novel creativity on the cusp of the present moment and its vital pulse in society. That conceptual dissonance is appreciated by the likes of sculptor Kemal Tufan, for example, whose monumental stone carvings are scattered throughout the globe to advance his special take on prehistoric, or trans-historical consciousness with an artistic process that is equal parts fresh, fleeting and timeless. In her own way, Günnur Ozsoy also went down this path with her felt-covered, contemporary sculptures inspired by Yörük (nomad) tents and whirling dervish caps.

In 2003, while studying in graphic design at the Central Saint Martins College in London, Sayınlı collaborated with the Norwegian rug artist Jorgen Evil Ekvoll. The duo exhibited works together at Galerist in Istanbul, in 2007 and 2011. After pursuing knowledge of the traditional craft of kilim (traditional light carpet) weaving by conducting extensive, serious research, Sayınlı embarked on another creative partnership, this time handing down the gifts of his muse to the London-based artist Charlie Swan, known for working primarily with pencil shavings. Pilevneli's current exhibition, "Rugs and Kilims" features handwoven kilims that Swan and Sayınlı made collaboratively after sharing mutual perspectives on Istanbul, where they've both lived for years.

In many ways, Sayınlı's contemporary revision of traditional craft is similar to the works of Ai Wei Wei, especially as in the comprehensive exhibition of his life's work on display at the Sakıp Sabancı Mardin City Museum until the 29th of July. As when Wei Wei lacquers the plight of Syrian refugees onto a ceramic dish, so Sayınlı weaves cosmic consciousness and unhinged worldly liberalism into a revitalization of the age-old art of textiles.