The past in photo show: A ghost story 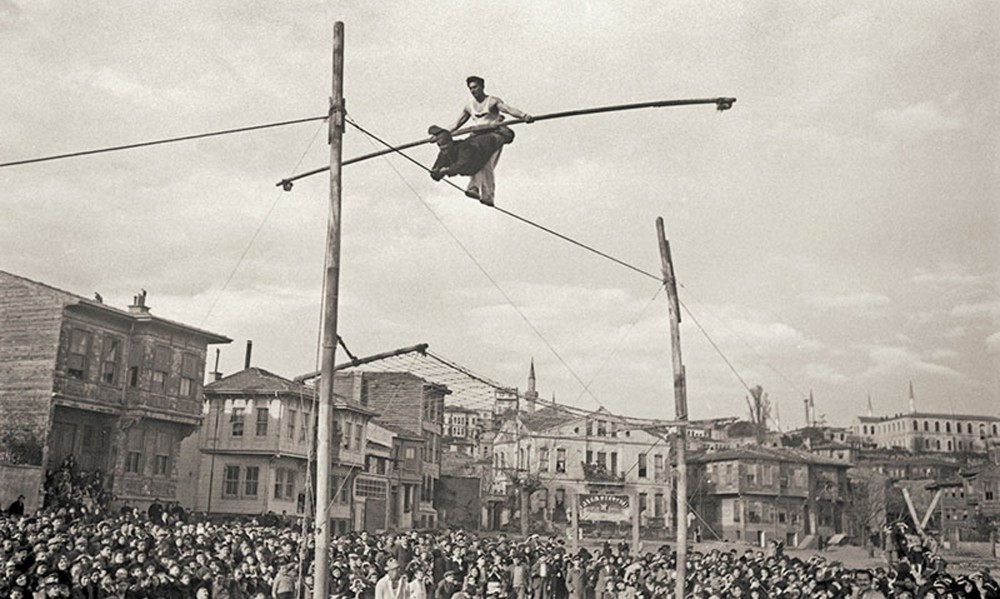 At the Yapı Kredi Culture Art complex on İstiklal Avenue, a pair of exhibitions enlighten the history of photography with silver impressions from the darkness of the past, revealing contemporary artist Mat Collishaw's ‘Thresholds' alongside the post-Ottoman photojournalism of ‘Cities on the Move' until July 29

A lone man looks up, swallowed by an unseen sky. He is physically desperate to the point of soul exhaustion, clothed in rags and perched on a steep slope, barely holding onto the loose rocks of a remote, volcanic mountain, high above the tree line, well beyond sight of civilization, society, and culture. His eyes are covered in the bulky, virtual reality goggles of the fast oncoming, though seemingly distant and increasingly unnatural future.

Scantily clad, he is a man out of time, forsaken by nature and history, simply gone. As he gazes into absolute nothingness, his screaming penetrates through the wilderness with an echoing intensity, as to reverberate through eternity.

It is the striking, central image of the "Untitled" (2018) video work by the young Hasan Mert Öz, a graduate of Marmara University's painting department. His work is curated for display by Nadim Samman along Istanbul's core commercial, pedestrian thoroughfare of İstiklal Avenue as part of the Akbank 36th Contemporary Artists Prize Exhibition. 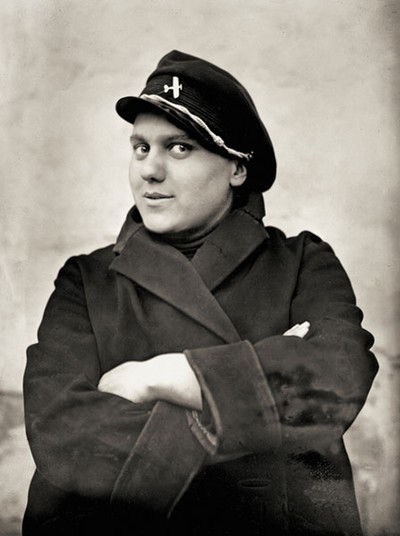 And on down the way that has symbolized freedom and modernity for at least the last century untold, Yapı Kredi Publishing's cutting-edge "Culture Art" building is a contemporary architectural diamond in the rough within the city's formidable renovation efforts.

Across from the oldest high school in Turkey, established in 1481 as Galatasaray University, the multi-story, transparent glass facade of the restored building is a beacon for the ongoing intellectual legacy of the metropolitan region that began with a meeting between a sultan and a wise man, namely Beyazıd II and the Rose Father (Gül Baba), who asked that the made emperor of conquered New Rome prepare his imperial foundations as a center for multicultural cultivation.

At the border of times

When the Ottoman Empire fell, the Balkan nations that had been under its sway for five centuries set out to make themselves anew during what is now known as the interwar era. In order to do so, they employed the most current, even fashionable, technologies of the day. Among these was the camera, a mint device for capturing the immediacy of the social moment.

The scholar Natasa Miskovic led the project, and authored the texts that culminated in the historical photograph exhibition, "Cities on the Move: Post-Ottoman." Its exploration traverses four cities in five themes. Istanbul, Ankara, Sarajevo and Belgrade are pictured in the contexts of the city center, the nation and the body, leisure and religion, dress, and the bazaar.

The quality of the photographs is utterly impressive, standing the test of time, but they were not taken by mere amateurs. The photographs curated for the show were gleaned from leading newspapers, specifically by a few top cameramen of note.

They are the all-but-forgotten Namık Görgüç and Selahattin Giz, working for Cumhuriyet newspaper, and Aleksandar Simic and Raka Ruben, shooting for the Yugoslav paper, Politika, and Svetozar Grdijan for another called Vreme, and last, though only least in age, the 19-year-old Alija Aksamija is also framed among the sharp restorations.

Eye-popping with surprise detail and vivid urgency, the portrayals of the four cities in focus are scattered, so as to purposefully lead the seer to envisage the bygone settings themselves. Ladies donning a sideways boater and a backwards toque walk in vogue, gloved, arm-in-arm, with a leashed dog in tow.

The charm and personality of these women transcend a century of national turbulence, evoking the naivety of an emerging feminism that flourished with a smile as the leisurely duo out on the make in the shadow of an iconic, embattled Atatürk statue.

In a related scene, a team of women take to the unpaved street in military vestiges, holding Turkish flags and marching together with comrades.

The movement to modernize is synonymous with female empowerment. It is nowhere more visible than in primary documentation, such as photographs, that depict women experimenting and at the same time assessing the front line of civilization's technical and cultural advances.

Throughout the exhibition, "Cities on the Move: Post-Ottoman" the feminist gaze and its enduring presence makes a stand, as in the pilot's seat of a plane, in the uniform of an official, or as the more numerous membership of a folkloric band singing Slavic ballads to the homeland in full, traditional regalia. The stills are accompanied by a 27-minute film adaptation, titled "Zeitgeist" by director Lordan Zafranovic, written by Miskovic and set to entrancing music by the Bosnian vocalist Bozo Vrecco.

Only ghosts walk on the other side of the machine that recreates the past. In through the virtual art of Mat Collishaw, some 200 people daily cross the "Thresholds," as his exhibition is titled at Yapı Kredi Culture Art, into the high society English institutions of 1839. During the months of January and August that year, a failed sketch artist named William Henry Fox Talbot presented ninety-three photogenic drawings. In broad view of the public, photography was born.

Talbot, a modest creative, did not lay claim to perfection, only to a beginning that could revolutionize perception. He then confessed not understanding the limits to the process that he had flung into life. And truly, he had foresight. It is the case that countless people see through an artificial lens before, and long after, the sight is beheld organically, in the fleeting moment.

"Thresholds," while not a total initiation of unprecedented technology, deepens public awareness and interaction with matters of subjectivity that touch on the very nature of being. Blinded by VR goggles, the curious see an immersive world that moves and crawls with light and heat, information and history. 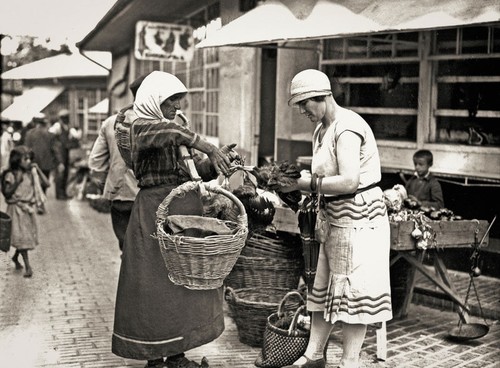 Svetozar Grdijan's "Shopping in Zeleni Venac Marketplace, Belgrade, at the end of 1920s."

An unreal fire is unnervingly hot to the touch. Spine-chilling mice dart across the gas lit, 19th century floorboards of The Model Room inside the gothic, cathedral-like interior of the King Edward's School, where the British Association for the Advancement of Science showed the first photographs to the world. Outside, there were riots.

Collishaw resurrects them, as the Chartists beyond the fray sound off enraged through the nearest window in earshot of many more prototype photographs than are viewable within the five minutes given to peruse the private, early Victorian simulacrum.

Writing for the Financial Times, the art critic Gareth Harris presaged the virtual reality motion picture on the horizon of altered perception, by techniques that merge sensual neurology with computer engineering through a fusion of contemporary art and new media.

For the critically-minded, such experiences of augmented reality are tantamount to ordinary escapism, catapulting the unsuspecting and easily-distracted global masses further into a mechanical world devoid of life, widening the divide between middle class consumerism and the sources of environmental nourishment that are increasingly forgotten, neglected and wasted in the post-industrial paradigm.

As in the dystopian vision of the 20-year-old Öz from Mersin, the guises of technical connectivity and scientific progress have too often led to personal isolation, collective annihilation, physical exhaustion, and a generation deprived of a feeling for its planetary roots.