The young Byzantinists: A scholarly adventure to Anatolia 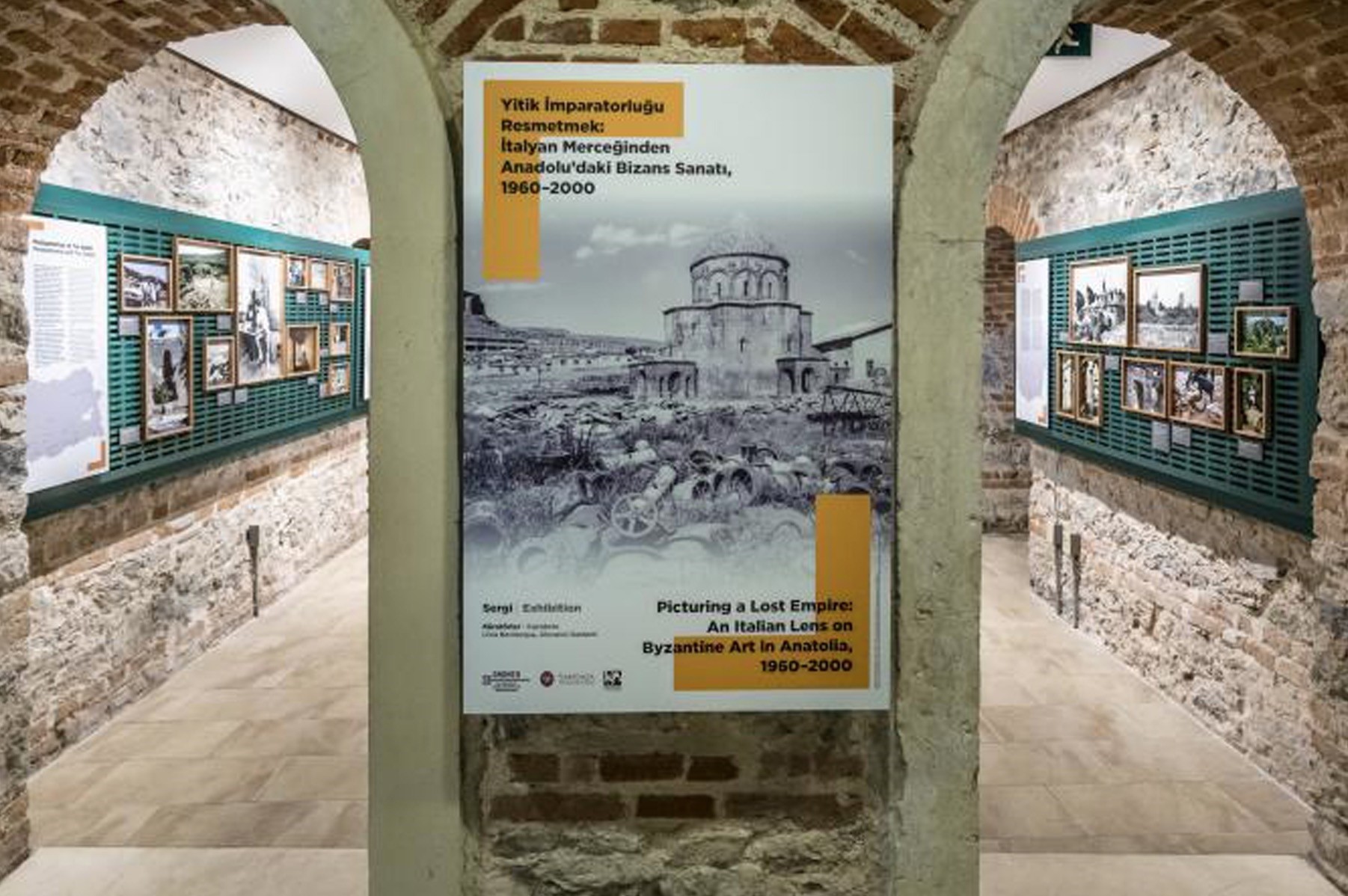 On floor -1 at the Research Center for Anatolian Civilizations (ANAMED), the exhibit "Picturing a Lost Empire: An Italian Lens on Byzantine Art in Anatolia, 1960-2000," features photo essays, interpretive text, extensive maps, and a documentary short until Dec. 31

In the late 19th century, Italian society had not gained perspective enough to appreciate the breadth of its history. The creative work that had moved its cultural legacies from antiquity to the contemporary was untaught, invisible. As was typical in the wake of the 18th century's secular spirit of national revolution, while the inspirations of the post-Napoleonic Romantics galvanized Europe during the Age of Enlightenment, the ideological bridge that most crossed armed to the teeth with French philosophy and English technology, progressing from classical civilization to democratic modernism, swept over a pitch-black chasm of silence that none dared look down, for it was morally dark and had been riven deep with the untold sufferings of medieval times.

The entire range of artistic production cultivated during the shadowy and obscure Byzantine era following the downfall of Rome in 476 A.D. had no place in the academies of Italy, which remain some of the very oldest in the world, founded during the very era in question when Greek replaced Latin for the breathing of the sacred vowel, as the language of prayer. The esoteric backstories of Byzantine art in Italy have since surfaced to enjoy the prestige of academic discovery, as attested by one of its foremost living adherents, Professor Antonio Iacobini of Rome's Sapienza University, the 12th institution of its kind ever to open when it first enrolled students in 1303. As he said in an interview for the Borak Films production accompanying the ANAMED exhibition, "Picturing a Lost Empire," 19th century Italian scholars covered the entire early medieval, pre-Renaissance period with a single, broad stroke, heaping its multifaceted subjects under one umbrella discipline called Byzantine studies.

It was not long after the turn-of-the-century, in 1901, under the pioneering intellect Professor Adolf Venturi, when Byzantine monuments entered the realm of scientific inquiry as part of Italy's national, artistic heritage. Venturi held the first chair of art history in Italy, and his brightest student, Antonio Munoz parted from his flock when he traveled the eastern Mediterranean, reaching Turkey to study the Chora Church from 1905-1906. None of Venturi's students had breached the dusty tomes of illustrated histories and what samples could be found drawn and arrayed for armchair curiosity not far from the school's dormitory. But for Munoz, who would earn distinction as the first Byzantine art historian from Italy, he had to see the then-unknown mosaics firsthand, examine holdings in Istanbul's archaeology museum, and scan the illuminated manuscripts of Topkapı Palace, smelling the stained parchment with a nose for resurrecting the timeless soul of the past, ultimately conveying his invaluable finds for the inaugural exhibition of Byzantine art in Italy that he co-organized at the Greek monastery of Grottoferrata in 1905.

A new field for research

The rise of fascism in Italy led to the prompt decline of any popular, or institutional respect for the Byzantine era, as its skewed ideals prioritized the glories of the Roman empire over the decadence that bred Greek Orthodox Christianity and its remote, introspective, eastern gaze. There were some who went against the grain, such as Pietro Toesca of the University of Rome and most notably, Sergio Bettini, who as Iacobini explained on film beside his close colleague, Professor Allesandra Guiglia, had maintained working relationships with the latest advances in international scholarship, despite the political regressions that would have strong-armed Italy out of its intellectual birthright, and rightful place in the world's cultural heritage. Bettini especially cast a dedicated light on the exquisitely masterful 16th century painter Jacopo Bassano, who he loved for what he saw as the "fading shapes" of the Byzantine aesthetic in his works.

Ultimately, it was Bettini who trail-blazed the resurgence of Byzantine art studies in Italy, and not only from his professor's seat at the University of Padua, but after arduous trips through the Balkans from 1933-1936, during which time he settled temporarily in Scutari, Albania, concentrating on the country's architecture, sculpture and painting. Finally, he reached Istanbul in 1936, schlepping through post-Ottoman Bulgaria, where, like Munoz, he made firsthand contact with artifacts in the ancient capital of Byzantium, and next experienced a transformed consciousness that moved him to emphasize the necessity of field research. It was a mentality that transferred over to the storied figure of Geza de Francovich, a legendary Italian art historian whose lectures on the Hagia Sophia remain influential, as he was thoroughly steeped in his uniquely immersive exposure to everything from the church mosaics of Thessaloniki, to 15th century Florentine wooden sculpture and even the far-flung Achaemenid art of old Persia. 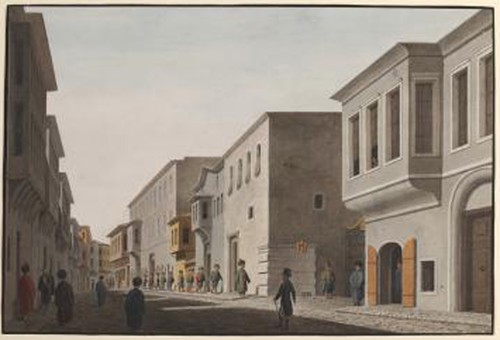 The history of the Merkez Han, where ANAMED is now based on Istiklal Avenue in Istanbul.

De Francovich plays a lead role in "Picturing a Lost Empire", essentially Italy's erudite love letter to Anatolia through its appreciation of shared Byzantine cultural foundations. For example, Giuseppe Bovini, a confrere Byzantinist in Bologna, was responsible for a momentous conference in Ravenna that welcomed Turkish specialists Nezih Fıratlı and Semavi Eyice, strengthening pan-Mediterranean relationships from the Strait of

Otranto, the Bosporus of Italy to the Tigris River that had not been pronounced for over five centuries. Back on campus at Sapienza, de Francovich gained certain local celebrity status for luring his fellow bookworms out of the library and into the vast expanses of southeastern Turkey and the highlands of Armenia from 1966 to 1972, golden years that presaged the arrival of a matchless peer whose name stands as the pinnacle of enthusiasm on the subject, the ageless and colorful adventuress Fernanda de'Maffei, whose pictures from expeditions in the 1980s enliven the mysterious, underground air beneath the Merkez Han building on İstiklal Avenue, where ANAMED is based. She is usually seen not far from her colleague Italo Furlan, as they sketched and demystified the Mesopotamian regions of Turkey, as in the tempestuous multiethnic, Syriac region of Tur Abdin.

A road trip to Byzantium

Natural friends, de'Maffei and Furlan espied such finds as from the 6th century Justinian fortifications of Dara, spending hot days haggling over research funds, playing cards when not observing the remains of the border that divided the Byzantine and Persian empires, and generally charting the ruins of 10 centuries, from 400 to 1400. They sparked unprecedented momentum to return the great gifts of Italy's darkest history back to her in the form of books, notes, and over 35,000 photographs at the Center for the Documentation of Byzantine Art History at Sapienza University. De'Maffei lives in the memories of her admiring students, many now senior researchers. One apprentice, Professor Grazia Marina Falla, recounts with unfading fondness of the time when she accompanied de'Maffei to Lycia in 1975. 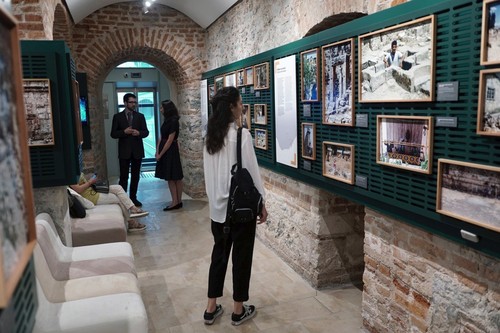 The next generation of Byzantinists have come to survey the current ANAMED exhibition.

"When it came to climb a cliff, she was always the first to reach the top," said Falla, speaking of de'Maffei as an "authentic mountain woman." Professor Guiglia confirmed as much with a strained, thinking-person's laugh, awing at how de'Maffei stopped at nothing to unlock ancient church doors in the middle of nowhere, immediately turning to local help at the nearest village when needed with a poise that she had gained as a frequent traveler in the Middle East. It was on those requisite exploratory ventures where she groomed the contemporary generation of Byzantists, such scholars as Mario D'Onofrio, expert on the ancient Armenian city of Dvin, and his traveling companion, Francisco Gondolfo, whose sole purpose was to understand and appreciate the humbling wonders of single-nave basilicas.

In one of the more recent publications of Byzantine art history research from Sapienza, titled, "The Gates of Paradise: Byzantine Art and Technology Between Italy and the Mediterranean" (2009), the author, Professor Iacobini shone a light on the art of bronze doors from 11th to 12th century Istanbul, which were enviably imported in Italy, and even branded as in modern terms, with signature, "made in Constantinople" quality. One door bears an iconostasis-like design and is revered as a masterpiece where it stands at the Basilica of Saint Paul Outside the Walls of Rome.