Tolkien exhibition at Weston Library is a cabinet of wonders 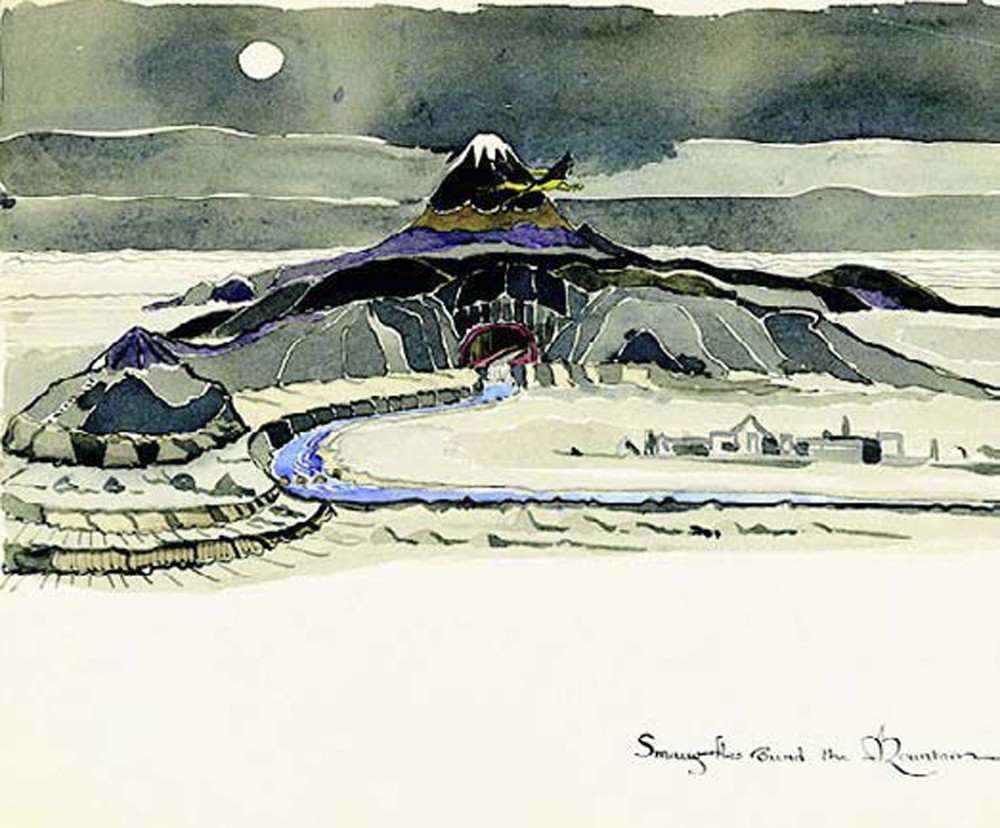 A general outlook of Hobbit houses and Middle Earth, drawn by Tolkien.
by Nagihan Haliloğlu Aug 08, 2018 12:00 am

‘Tolkien: Maker of Middle-earth' opened at Oxford University's Weston Library on June 1 and can be seen until Oct. 28. The exhibition includes Tolkien's manuscripts and drawings, and walks you through the creative process behind one of the most loved parallel universes of all time

"This royal throne of kings, this sceptered isle, this earth of majesty, this seat of Mars, this other Eden, demi-paradise" starts Shakespeare's well-known paean to Britain. The country is having one its hottest summers, and so the Eden, the demi-paradise one associates with the British green pastures, feels like a vestige of the past as fields turn yellow under uninterrupted sunshine. Imagine, then, the joy and relief one feels, entering the cool and dim exhibition space of Oxford University's Weston Library, which has been hosting "Tolkien: Maker of Middle-earth."

I cannot claim to be very well versed in Tolkien, but anyone familiar at least with the film adaptations of "Lord of the Rings" and "The Hobbit" will be aware that Middle-earth represents a pre-lapsarian, indeed, a pre-global-warming England. Accordingly, stepping in from the harsh July sun into this chamber full of J. R. R. Tolkien's wonderful drawings and manuscripts depicting the green and benign geography of the Shire makes one feel very nostalgic. 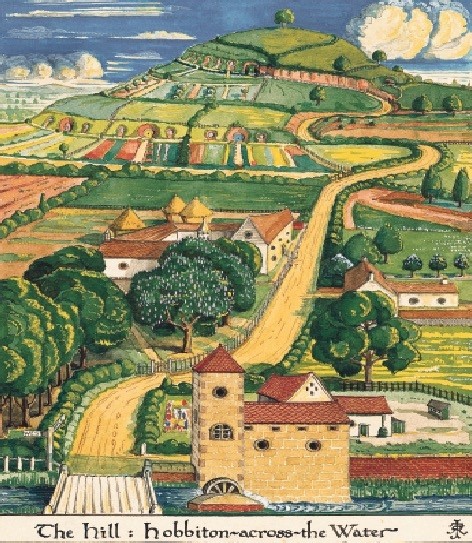 The exhibition devotes three big displays to Tolkien's "The Hobbit," "The Lord of the Rings" and "The Silmarillion." The instant revelation as you enter the room is how prolific Tolkien was not only in spinning these tales, but also in illustrating the tales as he spun them out. The items displayed show that the illustrating and the storytelling were in fact organically linked. Projected on one of the walls is Tolkien's unmistakable green, blue, black and white cover for "The Hobbit," and the displays reveal that although he attached a note for a red sun, the publisher ignored the suggestion because it would raise costs. Another reminder of how some of the most iconic images we know have been shaped by necessities just as much as artistic decisions.

Tolkien was a professor of old and middle English, and this is an exhibition that brings the centrality of language to the fore. There are quotes from his diaries and correspondence that highlight the place of writing and calligraphy in his work. "I am primarily a philologist and to some extent a calligrapher," he says in one of the quotes displayed. There are several sheets of paper on which Tolkien practiced the letters of the elvish alphabet. "The invention of language is the foundation. The 'stories' were made rather to provide a world for the languages than the reverse," he says. This explanation gives an insight not only to the world of Middle-earth but also into a whole understanding of narrative structure.

While the worlds Tolkien created take up the walls, the display cases in the middle tell us about his personal life. You can see his desk and writing materials, and Christmas cards he drew for his children.The desk display is accompanied by the explanation that his study was always open to his children. There's a beautiful sheet of his sketches depicting the goings on in his house, including one of his wife washing the dishes, with water spluttering all over the place. It is this attention to domestic detail that makes, say, Bilbo Baggins' home chores and worries believable in "The Hobbit." 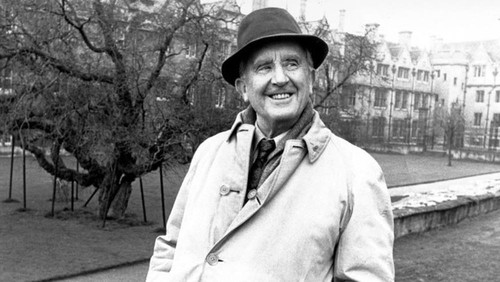 J.R.R. Tolkien was a professor of old and middle English. The exhibition reveals Tolkien as a friend whom you have taken for granted, but whose history you have never bothered to find out.

The exhibition reveals Tolkien, at least for me, as a friend whom you have taken for granted, but whose history you have never bothered to find out. One display case tells the story of his short childhood in Bloemfontein South Africa, where his father worked as a bank manager. It is a revelation that one often has to confront concerning one's favorite artists, this link to colonial exploitation. However, Tolkien seems to have enjoyed the privilege for only a short while, having lost both his parents by the age of 12. The section about his early youth reveals his early attachment to Edith, his future wife. Then there are handwritten notes and letters detailing his activities with the Inklings, a group of Oxford academics who met at The Eagle and The Child pub, a 10-minute walk from Weston Library. The Inklings with whom Tolkien discussed his work included C. S. Lewis, who himself created another much loved parallel/alternative universe, Narnia.

The exhibition also gives a very good sense of the legacy of Tolkien's work with a wall lined with his works translated into several languages, and quotes from authors and poets like Iris Murdoch and W. H. Auden, saying how inspirational Tolkien's work is for them. There are examples of fan's letters: All good writers inspire a great following but with authors who create alternative universes, the pitch is always higher. At a time of no social media, Comic-cons and cosplay, Tolkien fans put their energy into writing letters to the author in elvish, and the display note tells us that Tolkien, ever the Oxford don, was frustrated to see that many of these were "full of errors."

Going through the exhibition one feels how handwritten documents on paper keep their talismanic quality, in a way screens showing emails and blog entries cannot. Tolkien was a fan of manuscripts himself, and one of the most interesting pieces is a page showing the materiality of his composition. Tolkien, it turns out, wrote a first draft in pencil and edited over the same words in ink, creating his very own palimpsest, and such a page displayed at the exhibition looks like a cousin to the Old English manuscripts he was working on. There is also the evidence of a constantly creative mind, and a hand that just could not stop doodling beautiful, colored patterns on the sides of the crossword puzzles he filled in religiously.

These patterns seem to have been a compulsive impulse to create a world in full detail - in particular that of the elves, whose myths he worked on meticulously in "The Silmarilion." The creation of a language, images and maps - several of them are on display here - are shown to have happened simultaneously for his narratives to work. There is no doubt this bedrock of invented myth that gives Tolkien's world such depth and immediacy, but as many urtexts, "The Silmarillion" remains lesser known than the narrative it spawned. It is the book that Tolkien started writing after 'The Hobbit," it seems, to fully flesh out the world he was creating. However, as it is not a single narrative, but a collection of myths and poetry of this fictional world, it had to be, again for commercial reasons,set aside for the grander narrative of "The Lord of the Rings." The displayed text draws attention to how the rings trilogy, although developed from the rather tamer world of "The Hobbit," reveals much darker forces, written as it was during World War II.

The "Lord of the Rings" films have been very popular in Turkey as elsewhere around the world, but two lines from the books/films that have been highlighted in this exhibition - indeed, with Tolkien's own drawings - are "Not all those who wander are lost," and "Speak friend and enter," both of which resonate for anyone with a knowledge of "wandering sufi" literature. This is a very carefully curated exhibition with loans from other institutions, and because it doesn't stretch out to several rooms and is contained in one dark room, it does feel like one has entered Tolkien's mind and can observe his creation process in all its complexity and wonder.