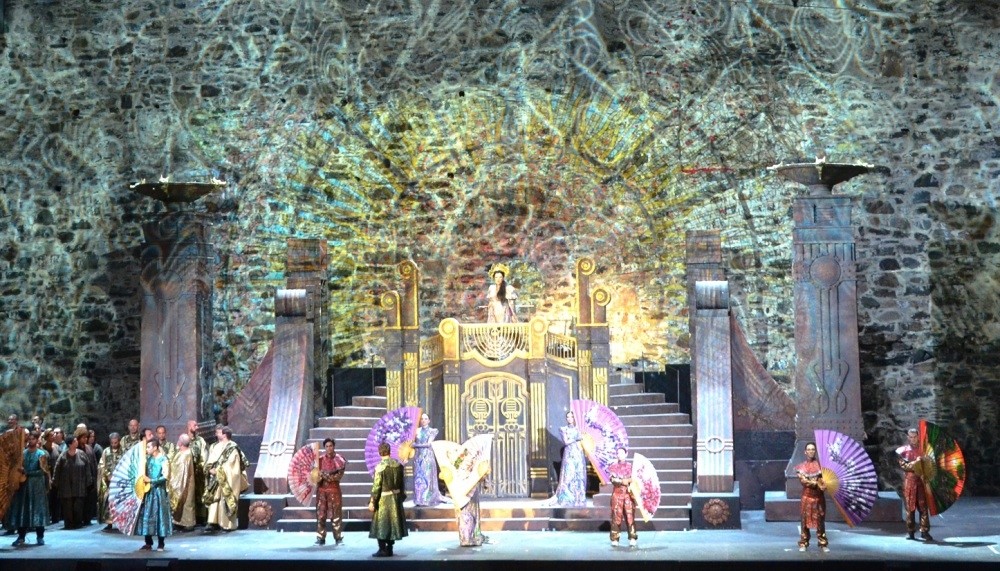 The State Opera and Ballet (DOB) of the Ministry of Culture and Tourism has determined the new season's lineup that will meet with audiences. Ballet and opera will be together for the new season, and also the DOB will sustain some restoration and renovation works to present a better artistic environment to opera and ballet lovers. Murat Karahan, the DOB's general manager and general art director, told Anadolu Agency (AA) that there will be new opera and ballet projects in the new season.

Referring to frenetic works that are ongoing at the Opera Stage in Ulus, Karahan further explained that the Ankara State Opera and Ballet building is being returned to its original form.

"We worked with special restorators to find the colors, paints and structure closest to the original. We can evaluate the back hinterland as a repair but the main hall and building is under very serious restoration. Hopefully, you will see the Ankara Opera as it was 60 years ago. We will open our curtains at the beginning or the middle of this upcoming October," he continued.

Karahan also provided information on new projects for the new season. "After we performed 'Turandot' on the stage of Aspendos, we are planning to present the play to the audience in Ankara after 12 years. It is very exciting. 'Turandot' is really the most important work of Turandot Giacomo Puccini."

"Turandot" will be performed at the 25th International Aspendos Opera and Ballet Festival with the production of Ankara State Opera and Ballet. Karahan reminded that he will be playing the role of Calaf, which he has recently performed at Arena Di Verona in Italy. He also explained that Puccini passed away after writing Liu's aria in the third act, and the last 15 minutes of the opera was completed by his assistant with notes Puccuni has left. Karahan stressed that the work was very emotional in this respect.

'Fiddler on the Roof,' one of the works to take stage this season

Karahan said that they are thinking about performing "Fiddler on the Roof" at Ankara Opera and that he believed this news would excite the audience.

Karahan further informed there will be works continuing from the last season and that he will have a surprise operet this year but he didn't give the name of this operet to keep it as a surprise. "I believe our audience will like it very much and the news will create a great deal of excitement," he added.

'Troy' project on the way

Reminding that he came together with Turkish composers within the last few months, Karahan said, "We have new projects as local works. The most important of them is 'Troy.' We prepared an opera for 2018, the Year of Troy. This actually is an epic opera."

"We are talking about a very big stage show, where ballet and opera go hand in hand, and a performance that 254 people will work on. We will also benefit from technologic opportunities, such as 3D mapping for the stage-décor. We also support the project with a grand stage show. We want to introduce it and show it to the world," he added.

Münİr Opera surprise at the opening of the new AKM

Karahan said that they also have a medium-term project of creating a Münir Opera, which will be dedicated to Münir Nurettun Selçuk, an important Turkish composer and vocal artist, and tell the story of the life and loves of Selçuk.

He pointed out that Selçuk is actually a tenor and that many of his works are actually sung like an aria and added that they will be conducting this work with Timur Selçuk, if he allows it.

"Think about what would happen if the final aria of the opera ended with 'Dönülmez Akşamın Ufkundayız' (We are on the Horizon of an Unforgettable Evening). What we desire to do is to blend the music that is local, that is national, that is from these lands and show it and teach it to the world," he said.

He also noted that they are thinking about presenting the Münir Opera at the opening of the Atatürk Culture Center (AKM) in Istanbul. "We want to open the new AKM building with the Münir Opera if we can manage. Right afterwards, 'Troy' will be staged in November in Ankara," added Karahan.