The art of silence: ‘No Story' at Art On Istanbul 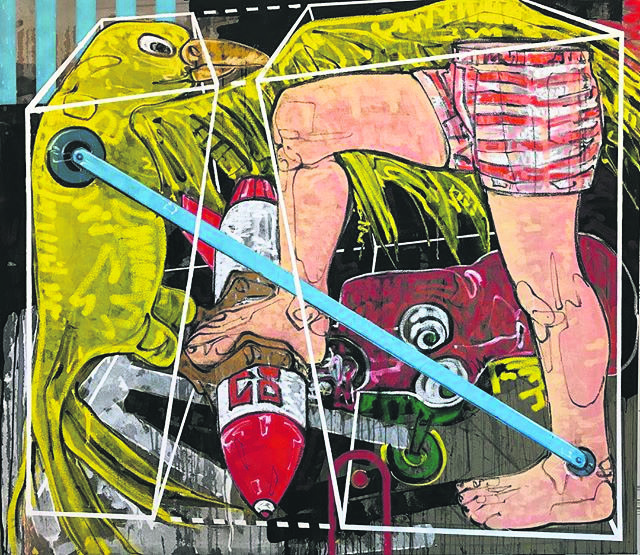 ‘No Story', the current show at Art On Istanbul, reinterprets the visual vocabulary metaphor as its nine artists exhibit signature styles that transcend narrative form with nonverbal expressions in painting, sculpture and mixed media through Aug. 31 at the downtown gallery situated in the heart of old Pera

In his 2013 article for Art in America, titled "When Formalist Criticism Fails," the art writing professor and distinguished photography commentator, David Levi Strauss wrote about a controversial review published in the New York Times that was deemed racist and misogynist by 1,650 petitioners representing the upper echelons of the art world. As one of the signatories, Strauss decried its regressive outlook for, among more material issues, necessitating proof for what he called the "social function and effects of art." He went further back, to 1977, citing a New Yorker piece by the critic Harold Rosenberg to cement his case as to why formalism, or aesthetics as it was once termed, should know its place as an anachronism in contemporary art writing, lest the culturally vitalizing intellectual practice devolve into what Strauss referred to, ever so persuasively, as "an unconscious formalist supremacy," a kind of thinking that buries the unsung and dims the brilliance of true novelty where creative work and social movements merge. His appeal to reinvent critical language toward new and transcendent public perception, especially during times of popular change, is relevant to the nonverbal concept behind No Story, with its lack of curatorial, or artistic statements, or any noticeable textual elements beside the basic tags for each of the 26 artworks.

From the French New Wave of Jean-Luc Godard's best-dressed Left Bank criminals to the No Wave of Jim Jarmusch's underground New York freethinkers, film history, in many ways, reflects the power that even the latest curations of visual art in inner-city exhibitions preserve when they shed plot-heavy elements in favor of pure style, to express personality, character and idea over the mere logical thinking of end-to-beginning cliches. And more, No Story is something of a performative metaphor for the summer season itself, when the charming, capricious world of Istanbul's contemporary art galleries goes relatively silent, turning to liberal customs of repose common throughout the country when the sun bakes, as movement slows and the city empties from the shores of the glistening turquoise seas that tempt south to north along the Bosporus like a throat quenched to speechlessness before the crystalline natural beauty of the time-bending metropolitan region. Inside the unflashy, three-level gallery space at Art On beside the Italian Cultural Institute, the sound of typing dominates the room, as the occasional looker enters to shop around for an experience in imaginative seeing while an expected guest is hurried into the back room down some stairs where muffled talk ensues out of sight from the art on display. They stand for themselves, the No Story works, unmediated by the personal histories of the artists' lives and processes, not even by catalog texts usually chock-full of erudite interpretations to chart newfound philosophical trajectories from starting concepts to the final products of bold, original vision.

The future is unspoken

Against the back of the upper floor of the loft-like warehouse interior at Art On, the wall-sized, 400 cm-wide work, "Untitled" (2007) by Mithat Şen fills the air with shades of black paint over goatskin mounted on fabric, and framed. Its amorphous, symmetrical patterns hold an abstract pose along with his more recent, "5 From the Series 'Istif III' (2017). His seemingly nonrepresentational shapes resonate with the choice of subdued colors, of mottled crimson beside opaque ebony in his latter piece, materializing his sense of abstraction with a thoroughly distilled eye for visual arrangement. They are sculptures of frames, and concentrations of his minimalist palette, reminiscent in certain ways to the structural motifs of the late Turkish painter Abidin Elderoglu. And next to his works are a series of 10 mixed media canvases, "Untitled" (2018) by Erman Özbaşaran, which have fine, textural components, adding to the sensual effect of touch through sight. As by the rough hand of a ceramicist whose fired aesthetic is firstly practical, Özbaşaran figures in the impact of color gradation within each piece and as a whole over the course of the 20x20 cm works curated in a neat row. Pale reds are run with streaks of olive green, as semi-transparent swathes of darkened space recall the esoteric spirituality of painted space as invented and perfected by the genius of Mark Rothko.

The unfinished, concrete steps down to the storefront window entrance are furnished with two rust, acrylic collages on canvas by Ahmet Çerkez, an artist whose solo exhibition, "Stateless Maps" could be found at Art On Istanbul in the late winter. His works that now appear on the gallery floor were taken directly from his solo exhibition that ended in March, and which interestingly followed a very specific narrative related to the artist's family history. A likely relation to the overarching definition of No Story is the fact that his pieces are all untitled. But his concept for "Stateless Maps" followed the self-reflexive exploration of his visual storytelling. Çerkez utilizes such images as skulls within peculiar cartographic designs, visualizing the route of his ancestral, migrant roots from Bulgaria to Turkey. It is particularly apparent in his, "Untitled" (2017), the larger, 73 cm-tall work of his two pieces at No Story, hung beside one of his more hypnotic works, which maintains a bird's eye view over a futuristic, microcosmic, computer chip urban grid, as was classically captured in the experimental 1982 film, "Koyanisqaatsi" by Godfrey Reggio.

In view of window shoppers who may have lost the way around Istiklal Avenue, and along the wall towards the door inside Art On are a pair of oil paintings by Evren Sungur, both "Untitled" (2018). It is a welcome, curatorial accompaniment with the techniques of Çerkez, as Sungur paints with oil way off-the-beaten trail of tradition. It is simply the case that his paintings do not look at all like oil paintings. The patchy surface appearance of his work seems more like pastel, or watercolor, and the aesthetic of his subject matter has the spastic air of street graffiti. More, he utilizes geometrical lines to frame the representational content, another similarity to Çerkez, however indirect and unconnected. Finally, there is the polyester sculpture, "Untitled" (2017) by Burcu Erden, of a headless, slouching, half-sunken humanoid figure leaning against the dividing wall invisible to the glaring masses from outside. It's ghastly posture and pasty white makes for a fine curatorial arrangement against Sungur's surrealistic ensemble of a roped skeleton and graphic manikin.

A moment without words

The crown prince of peril, master of the flagrant eye, Ali Elmacı is a most welcome addition to No Story for the sheer bravura of his talent as a painter with a special command of neoclassical pictorial technique. His images are striking, simultaneously repulsive and gorgeous, conveyed through his mocking, satirical edge that is as sharp as it is irresistible. 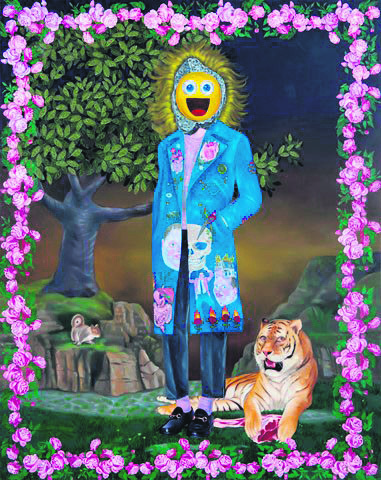 A new work, "Don't You Dare Touch Me" (2018), is characteristic of his scale, at 200 cm tall, its vibrant ring of violet pink flowers creates a mythical mood, with a figure front and center standing high and mighty over a languorous tiger. The person is fashionable, sporting gold-buckled slip on-shoes, and wearing a bright blue coat, as his face is that of a hysterically ecstatic emoji, beaming to near-implosion. Elmacı has a knack for balancing the waves of subtle and roaring social critique. His works at No Story tear to pieces the concepts of visual narrative, instead rearranging them with a fiery intellect that rains down like the mystical apparitions of end times.

As in his mural at the garden in Karga, a night spot that's all the rage in Moda, his bust portraits of men are topped with heads of hair that shoot out from the skull with screaming flames and ruined buildings. It is a sly device that he employs to portray the unstable emotional state of a man trying to hide while wanting to see others. In his second No Story work, cheekily titled, "I Can't Reciprocate Your Feelings Osman VIII" (2017), his peculiar wiles range even freer, set to a color-coded smorgasbord that comments on the anxiety of being seen, whether to be young and beautiful, or popular and influential. On the other side of the coin, his depictions of the voyeuristic, often male creeps emerge from cavernous openings and descend on wings from the fierce, crisp painted sky.

Elmacı is a rare, instinctive artist of the visionary tradition, yet one who taps into the mainstream, individualistic psyche of the profane rather than the collective consciousness of the sacred.