The ceramic art of Kütahya: A new exhibition at Sadberk Hanım Museum 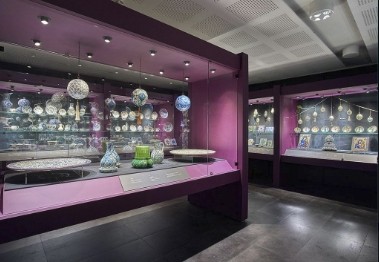 Istanbul locals in the northernmost district of Sarıyer dive into the Bosporus where the water is freshest in sight of the Black Sea. On the strait's western shore, the Koç family summered in an elegant mansion that now houses Turkey's first private museum currently exhibiting the ceramic art of Kütahya

When the storied 17th century Ottoman travel writer Evliya Çelebi saw the city of Kütahya he called it "the throne of Anatolia." Through his often fantastical, rose-tinted prose, he wrote that its "strong wall resembles a jeweled ring." He was almost certainly referring to its painted tiles that would beautify homes, mosques and churches for the next three hundred years till the global political upheavals of the early 20th century stamped the old world order, especially in Turkey, as outdated.

Like its more famous kindred city known for ceramic art, İznik, a place practically synonymous with the tile painting aesthetic of the Aegean region, Kütahya has since lost its repute as a contemporary center of international commercial buzz sustained by traditional craft. The aesthetic signature of ceramic art from Kütahya is based on the fact that its wares were firstly purposed for mostly domestic use, although the city's artisans produced significant works for mosques, tombs and, to a great extent, churches.

The artisans of Kütahya are said to have worked more informally and were free to be more expressive than in İznik, where designs focused primarily on wall tiles and were generally commissioned by palaces and other such stately institutions.

By the late 17th century, İznik had closed its pottery industries, leaving Kütahya with the responsibility to uphold Anatolia's unique contribution to the art of ceramics for buyers, traders and collectors throughout the world. 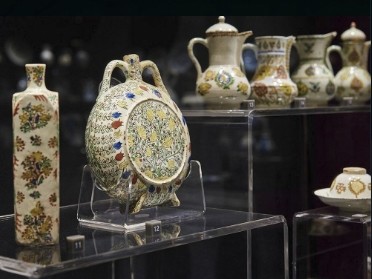 As one of the earliest items on display at the Kütahya exhibition, a pilgrim's flask from the early 18th century is interesting for its religious-historical context.

Although Kütahya ceramics were created with a greater sense of social and artistic freedom, the patterns and figures still tightly abide to its own collective style within its textured, fluid pigments that rise from transparent glaze. Particularly striking are the recurring shades of yellow that, even at a first impression, are one of many qualities that mark the art of Kütahya ceramics as utterly distinct from the purportedly higher-end work from İznik, and also from any of its far-reaching influences, which stretched from China to England.

The old flames of Kütahya

At the foot of Mount Acemdağı, the western Anatolian city of Kütahya is surrounded by places like Eskişehir, which travelers know on the train route from Istanbul to Ankara, and also Bursa, the old Ottoman capital that lies across the Sea of Marmara just a two hour ferry ride away from the southern tip of the Bosporus. Its present-day name is from the Old Greek, sometimes spelled Kotiaeion to the ancients who lived there for its fertile plains, plentiful water and thermal springs, yet were forced to defend the landscape to the death, likely since its earliest settlements were built in the 3rd millennium B.C., during the Early Bronze Age. In the enlightened context of the Sadberk Hanım Museum, which has a permanent exhibition hall of archaeological artifacts acquired from Hüseyin Kocabaş extending from 8,000 year-old, Neolithic sculptures to Byzantine metalwork, the entire historical breadth of life in Kütahya is pertinent, as it conveys the immaculate detail, and erudite discipline that is inseparable from Koç family cultural preservation efforts.

In the aquatic environs of Büyükdere, the Sadberk Hanım Museum opens into the former Armenian-owned Azaryan Mansion only a short walk to Surp Boğos, an Armenian Catholic church founded in 1885 with a spectacular view of the green slopes that now descend in the shadow of the third bridge over the Bosporus, dedicated to Yavuz Sultan Selim. Inside the antique, wooden whitewash exterior, the historic residence is furnished with such decor as a large, painted canvas of the Koç family tree, headed by its founding ancestor, Hacı Bayram Veli, the 14th century, Ankara-born Turkish Sufi dervish poet. Around its majestic frame are the classical portraits of Vehbi Koç and his wife, Sadberk, and daughter, Sevgi Gönül, who was ultimately responsible for bringing her late mother's vision into the light of day on October the 14th, 1980, to inaugurate Turkey's first private museum. As a young girl in the 1950s, she often accompanied her mother on trips to Istanbul's popular Covered Bazaar, returning with treasures from antique dealers for her growing collection that leapt from 3,000 to some 20,000 items. 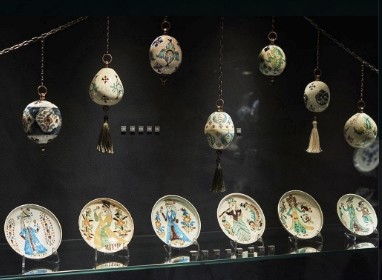 While most of the painting on Kütahya ceramics appear to be of the intricate floral pattern variety, there are stunning figurative works, such as these sketches of daily life on 18th c. plates.

The museum's permanent collection has a display of Kütahya ceramics, most from the 19th and 20th centuries, kept beside a diverse array of pieces from İznik, as the ceramic art of the two cities is intimately intertwined. Behind its two polished glass cases, there is a sugar bowl from 1921 painted in typical, light Aegean blue with the Greek letters for Kütahya. Opposite the intricate floral patterns that embellish simple trays, jars, figurines and ornaments, there are large roundels bearing the eight most important names in Islamic history: Allah, Prophet Mohammed, the caliphs, Abu Bakr, Umar, Uthman, Ali, and the Prophet's grandsons Hasan and Husayn. It is understandable simply by looking at the visual developments in the work, and when steeped in the clever, museological arrangement, how in the late 19th century, there was a revival in Kütahya ceramics due to renewed inspiration in creative dialogue with the legacy of İznik. In the spirit of Sadberk Hanım, her philanthropy and intelligence, the museum is a testament to her passion to preserve her cultural heritage in concert with the public, by collecting, repatriating and curating some of the finest creativity in the country by workers and masters of tradition.

An Istanbul gem, off the beaten path

In 1988, the Sadberk Hanım Museum won the "Europa Nostra" award, a pan-European representation tasked to prevent cultural endangerment. In that year, the museum presented its second wing to the public. At its first floor, temporary exhibitions run, such as the current Kütahya ceramics show, leading to an exhaustive store of archaeological treasures, like the Hellenistic sculpture of an African slave that the artist Fred Wilson applied to his "Afro Kismet" installation which transformed Pera Museum during the Istanbul Biennial. The resident archaeologist at the Sadberk Hanım Museum is Senem Özden Gerçeker, a kind, enthusiastic English-language guide with a knack for storytelling. Her appreciation for Kütahya ceramics is deeply rooted in her knowledge of Anatolian civilization, where contemporary identity politics confronts the total gravity of the historical and scientific facts that all people have mixed roots firmly planted and growing tall in the rich, local earth for generations. While there are variances in form and technique, the art of Kütahya ceramics exemplify the shared human identification with a certain place on earth as a potential inspiration to identify beyond Armenian, Greek, or Turkish ethnic exclusivity, but instead with the simple, and powerful act of creation. 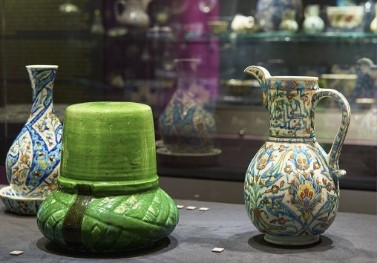 Kütahya ceramic arts played a central role in Ottoman material culture, specifically for its Muslim community as seen in the 20th century pottery figure of a Mevlevi head dress.

As the current exhibition is titled, "Kütahya," it is an homage to the proud soul of the land. While the city's tradition of pottery goes back at least five thousand years to the earliest evidence of human settlement, the oldest pieces on display only reach back to the 18th century, for a number of reasons which senior researchers Hülya Bilgi and İdil Zanbak Vermeersch explain in the thick, voluminous 500-page tome of a catalogue publication, which rightly costs 300 TL ($49). In the essay, "Tile and Ceramic Manufacture in Kütahya", authors Bilgi and Vermeersch describe the pre-18th century knowledge vacuum as caused by rebellion, ruin and fire among other roadblocks to historical documentation and archaeological excavation. After detailing traces and remnants of early medieval Kütahya pottery, the authors write: "Although pottery production in Kütahya can be traced back to antiquity and the region possessed the necessary raw materials, few examples of tiles and ceramics dating from the 15th and early 16th centuries have survived and there is none that can be dated with certainty to the second half of the 16th or 17th century."

Within the relatively narrow window of historical time, about 200 years from the early 18th to early 20th centuries, the Kütahya exhibition represents a fantastic range of creativity on forms practical, religious and decorative; from the coffee cups that were all the rage before tea had entered the Turkish diet and the delectable stimulus of the African-imported bean had only recently gained a name, to the rose water sprinklers sacred to Muslims that the Ottomans had commissioned the Chinese to produce, as shown in the museum's permanent collection, and the seraphim-illustrated hanging ornaments of the Armenian church. While the museum is far from Istanbul's core, where most of its unknowing audience wander in search of such sights as that which it preserves, there are talks of Sadberk Hanım's endowment moving to a larger space along the Golden Horn, where the Rahmi M. Koç Museum is located, though it will likely not be for another five years at least.