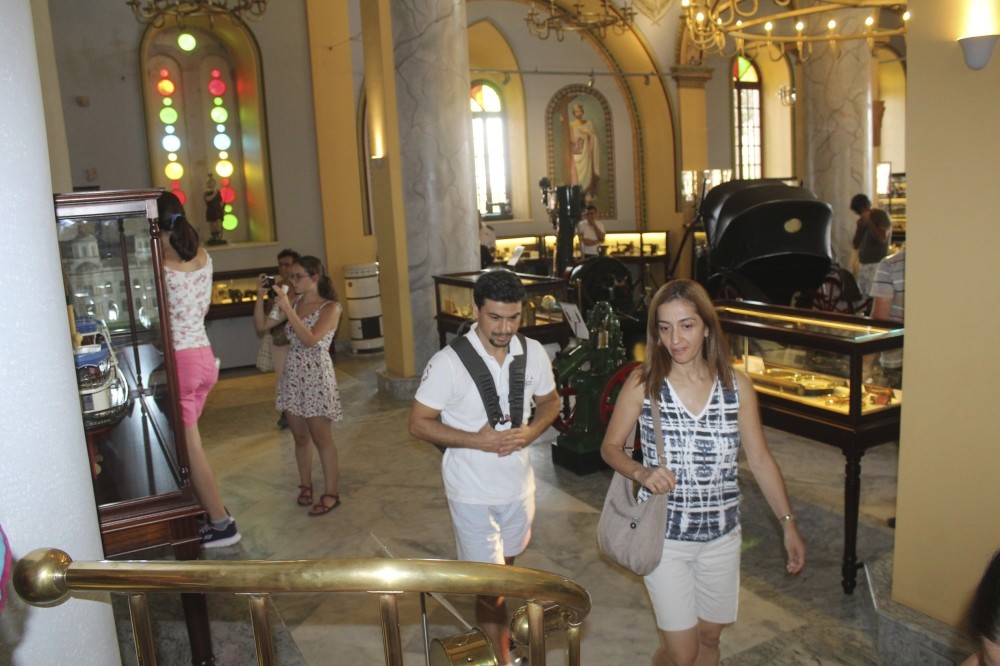 Taksiyarhis Church in Balıkesir province's Cunda Island in Ayvalık district has been turned into the Rahmi M. Koç Museum after extensive restoration.

The museum, which is visited by more than 100,000 visitors each year, is included in the Rahmi M. Koç Museology and Cultural Foundation.

Speaking to Anadolu Agency (AA), Honorary President of Koç Holding Rahmi M. Koç noted that they have one museum in Istanbul by the Golden Horn, a second at Çengelhan in Ankara and a third museum on Cunda Island.

Koç Holding has restored old buildings and turned them into museums.

Koç noted that they are very glad that there are both local and international visitors to these museums.

'Museums should be alive'

"Museums should be alive, static. Museums should keep the pulse of visitors and make innovations accordingly. We see such museums abroad. They are richer and bigger than our museums," he said.

"Unfortunately, there aren't many collections in Turkey. They are mostly procured from abroad. We restore and repair them at our workshops. Ready, repaired and restored works are very expensive. Therefore, we collect these from auctions, waste collectors and antique collectors. Now, as we are well-known, people who want to sell such goods get in contact with us. They offer them to us," he added.

Speaking about his dreams for the museum on Cunda, Koç said that they want to increase the number of visitors.

He said that they want to reach 1 million people per year. He is not sure about whether this is possible but he said this is their final target.

"The number of visitors, how they congratulate and appreciate me when they see me makes me really pleased. I hope we can open another museum somewhere else in Turkey," he said.

Koç also expressed that museums should have aspects that appeal to every age.

"This is not a toy museum on its own. It's a multifaceted museum. You can call it an industry, transport museum. You can say, 'it is a museum with an ancient value.' Therefore, it draws the attention of visitors from various ages. People usually get bored in museums after five minutes or half an hour. But they keep spending time in them if they see interesting objects, something different on the display. Of course each museum should have a small cafeteria and a souvenir shop. These are the social sides of museums," he said.

Taksiyarhis Church, one of the most important structures of Alibey (Cunda) Island connected to the Ayvalık district of Balıkesir province was built in 1873.

After the earthquake of 1944, it was abandoned and then rented by Rahmi M. Koç Museology and Culture Foundation for 49 years from the General Directorate of Foundations and after a two-year restoration it was transformed into a museum.

Opened in June of 2014, the museum aims to provide the scientific and technological memory of mankind to the domestic and foreign visitors and transfer the industrial heritage to future generations. Rahmi M. Koç Museum has a wide variety of works, from toys to a 120-year old coach, from former drivers' suits to a 1910 model car. It witnesses the last century with a collection formed of more than thousand pieces.