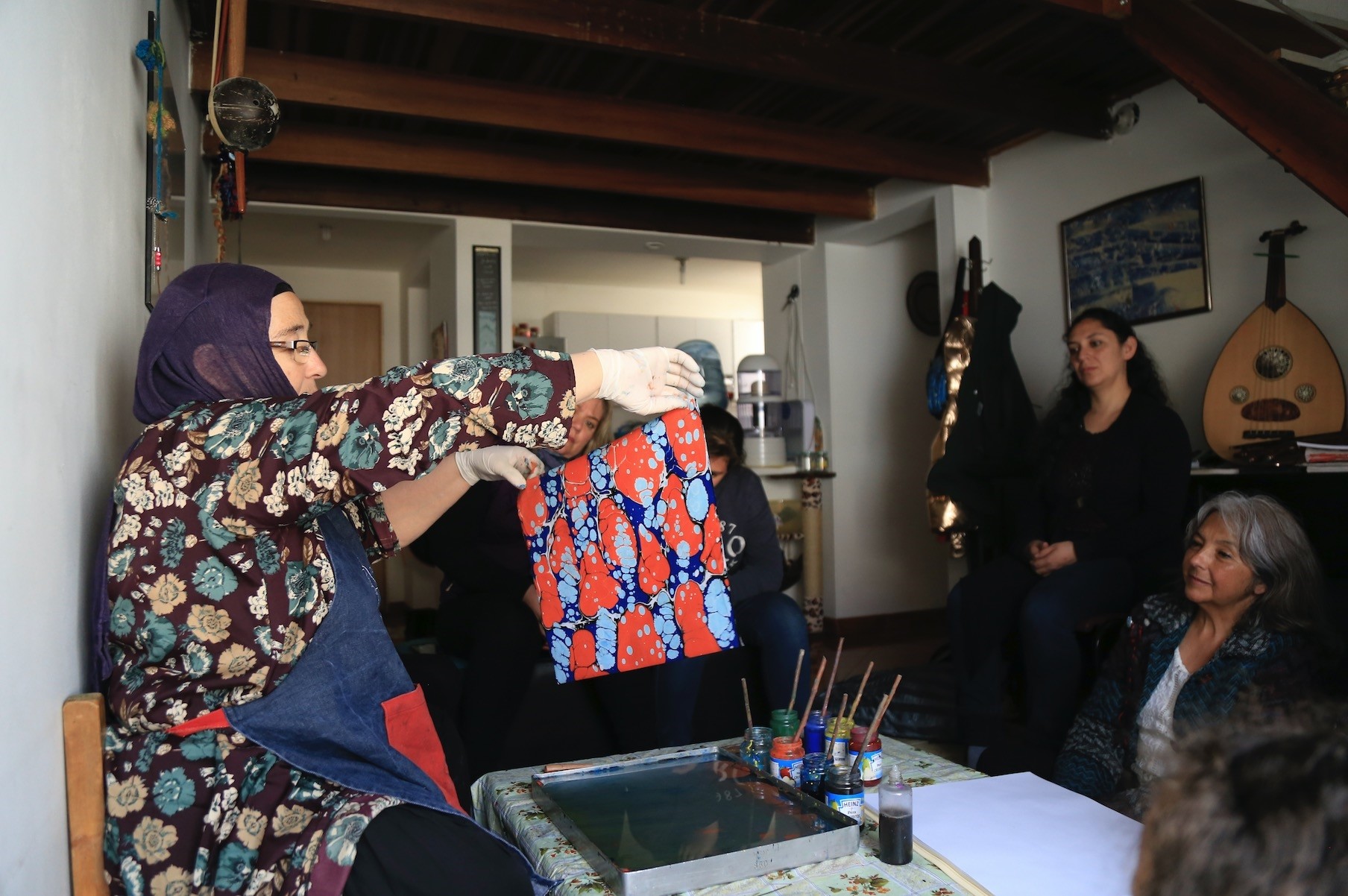 Uruguayan artist Meryem Quiolla, whose life changed forever after an invitation to Turkey introduced her to the traditional art of marbling. Now, she provides marbling classes as therapeutic art to help encourage underprivileged women, who feel undervalued and overwhelmed

After her lessons in a small workshop in La Candelaria, the historical center of Colombia's capital Bogota, Quiolla answered some questions for Anadolu Agency (AA) about her work.

Explaining that she was born to a family of Italian origin in Uruguay, she explained that she was introduced to Turkish culture, music and philosophy while researching for her family's roots.

Quiolla said she came to Turkey for the first time in 1989 after receiving an invitation from the late professor Rahmi Oruç Güven, the founder of the Group for the Research and Promotion of Turkish Music (TUMATA), and discovered Islam in this process. 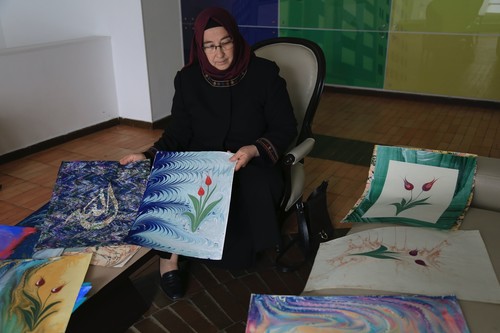 The artist sees marbling as an ancient and spiritual channel between people.

Saying that she became a Turkish citizen some years ago, she added that she works mostly with women in Latin American countries and organizes therapy sessions with Turkish music.

'Marbling is a spiritual channel'

Noting she sees marbling as an ancient and spiritual channel between people, Quiolla continued: "The tray filled with water is like a human body. The marbling, which is a very old art, provides communication with both this aspect and its flexibility. It's really good for the soul. Colors spread on the surface of the water. Those who see it feel the spread inside them."

She stressed that people who have difficulty expressing themselves or experience instability attend the marbling lessons along with those who are interested in this art.

"Marbling allows people to make decisions without worrying about their results. There are some people who are afraid of making decisions and have conflict inside them. Therefore, people, especially women and children, feel freer while doing marbling."

Work in Turkey and Latin America

Explaining that in Turkey she worked with children with autism and youngsters who have difficulty communicating and made progress thanks to marbling lessons, Quiolla said the biggest problem for women in Latin America is an overwhelming feeling of worthlessness. This is what inspired her to work with women in the region.

"Most men are afraid of taking on the responsibilities of the family; therefore, women constantly feel anxious. They become responsible for earning the family's keep and for the education of their children," she highlighted.

She stressed that, for some this situation often makes women feel like they cannot further themselves, which leads to isolation and feelings of hopelessness, while for others interest in personal development as a way out can surface. Giving her female students in Bolivia as an example, Quiolla said: "I think the problems of the women in Bolivia are much deeper. There are psychologists among my students. We have conducted successful sessions in marbling and therapy with music. For example, one of my students was good enough to exhibit her marbling works. Later, she opened her own exhibition in France."

Quiolla worked with Chile's Health Ministry for two years and organized programs for doctors in six hospitals. She mentioned that some students visited Turkey after taking her marbling lessons and chose Islam as their religion. "Some of them even moved to Turkey."