On the fringes of Byzantium: The mystical mosaics of Chora Church 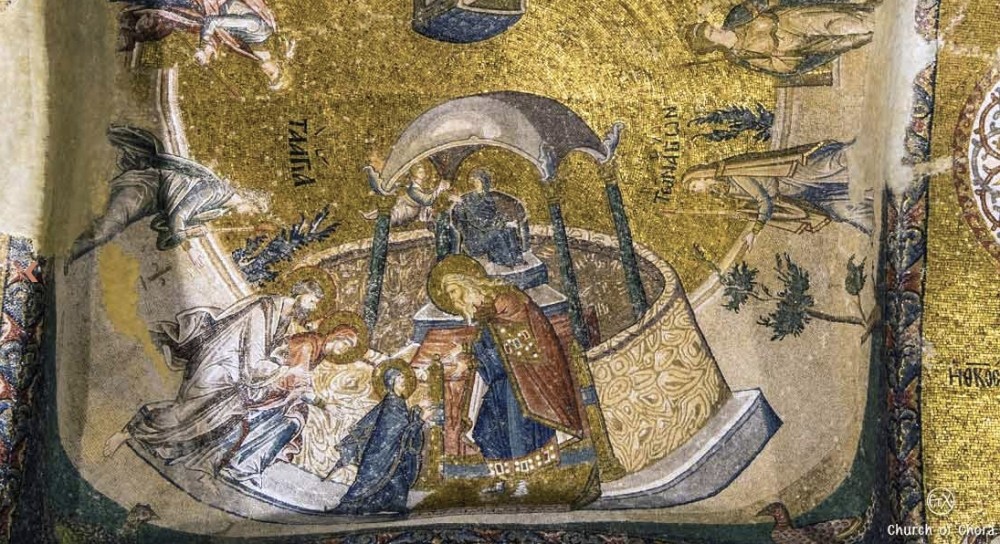 The Presentation of the Virgin in the Temple, or The Virgin Fed by an Angel, in the inner narthex of the Chora Church.
by Matt Hanson Sep 08, 2018 12:00 am

Before the fall art season kicks into full gear in Istanbul, footsore travelers and art lovers rewind the contemporary culture mixtape in Turkey under the eternal spell of 14th century Byzantine mosaics and frescoes at Chora Church in Edirnekapı on the fringes of the old city

Early in the fourth century of the Christian era, the Christian emperor celebrated as Constantine the Great revived the ancient Greek city of Byzantium, established over a millennium earlier, renaming it New Rome. He was a crowned Illyrian man from modern-day Serbia, enthroned atop the mythic landscape's temple-peaked acropolis overlooking three bodies of water. From the mouth of the Golden Horn inlet, the sloping environs of the ancient imperial capital now bend inward from half-constructed shorefront promenades through tangles of spiraling Albanian cobblestones that pattern the timeworn streets of Istanbul south from the Galata Bridge, a symbol manifest to connect epochs and peoples where two continents fuse under the burning summer sun that beats down on the light maroon, terracotta roofs and thin, emerald pines over the westward horizon, reminiscent of the Hellenic dream that once spanned the edges of the known world.

Outside the newly minted Roman capital, Christians occupied a pagan site to bury the relics of the martyred Saint Babylas from Antakya, a famous Hellenistic city in the Anatolian southeast. It soon sprouted into a monastery, for its remoteness, which Orthodox Christians still favor to reach spiritual oneness through solitary refuge from the world. It bore the name, "Chora" due to its geography, which in pre-modern Greek, loosely means "country," denoting its distance from the fast-growing metropolis closer to the Sea of Marmara and Bosporus strait, poised for worldly power and unbroken influence. Others interpret its name in a more mystical light, signifying a "dwelling place" for the soul of the Virgin Mary and Jesus, in his title and image as Pantocrator, ruler of the universe. Archaeological findings date the substructure of Chora Church, also called Kariye Mosque, to the sixth century. For the next 800 years, the holy edifice rose to assume its current shape.

The last gasp of the civilization modernly referred to as Byzantine, was in fact inhabited by people who called themselves Romans, then a Greek-speaking people who feared the migrant armies of the East descending from the northern shores of the Bosporus to snuff out the light of Rome, the heart of culture, law, art and history for Europe, plunging its people into plague and darkness until they found the New World at the round edge of the endless ocean that led to bounties yet exhausted, greater than any direct route to India. A century before the Turkish dynasty of the Ottomans conquered Hagia Sophia, cosmic center of Eastern Christianity, transforming its breathtaking expanse into the architecture of Islamic prayer, a local poet, scholar, statesman and patron of the arts named Theodoros Metochites saw visions at Chora Church. In his lifetime, he went from the heights of political fame, the equivalent of prime minister in the Byzantine empire, to dying a poor monk, buried under the gaze of the frescos and mosaics that he commissioned and that have given Chora Church its exalted reputation as home to one of the foremost, artistic achievements of Istanbul's multicultural legacy.

The guide and the seer

The young and passionate guide, Yasin Karabacak, stood under the marble doorframe outside Chora Church where he often awaits groups from around the world, lately Americans and Nigerians. In his footsteps, travelers become seers, as they follow his lead and listen to his explanations that are as keen as a sharpshooting hunter in the thick of a jungle. He is an intellectual time traveler with a sixth sense for the past, able to illuminate the complex, interwoven narratives of Istanbul's material history through experiential visualization, to usher firsthand witnessing of creative resilience before the passage of time, to grasp shared humanity in the face of mortality, to see through the veils of posterity to the afterlife in earthly paradises of the imagination fashioned from color and stone. His special weakness for the incomparable breadth of Hagia Sophia and his taste for global heritage in Turkey often sends him flying throughout Anatolia, most enjoyably, as he says, for the spices of Urfa and the sweets of Antep.

He walked over the polished foundation, where a central mosaic of Jesus the Pantocrator stared down above a brilliantly cut quartet of marble, set with symmetrical precision so as to display mesmerizing abstractions of natural design. And above, the semiprecious, gilded and colored stone layers of mosaic shot forth with a signature, three-dimensional effect that catapulted art history into what has been termed the "Chora movement" for the vivid colors and proportional accuracy in the legendary human figures of religious fame. There are scintillating whites and shimmering blues that, even in the dim, medieval interior, stand out with ingenious, aesthetic dynamism. Well-traveled, secular contemporaries do not generally peer into the typecast mien of Jesus at length, but at Chora, his Zeus-like demeanor is transcendent, reaching the heights of artistic prowess liable to captivate even the most ardent atheist. While so much of the church's mosaics are off-limits, including in the inner narthex chamber, due to ongoing renovation efforts, there remains a visual feast beneficial to anyone open to inspirations that breach the mundane orders of time. The shading and texture of garments are riveting, as are the emotive facial expressions of notables who petition Jesus for the salvation of humanity, beside Metochites presenting the church, and Saint Mary of the Mongols, whose storied name is dedicated to the sole remaining church still active from Byzantine times in Istanbul.

Christ Pantocrator, above the central entranceway mosaic at Chora Church.

There is a nonlinear, mystical arrangement to the Chora mosaics, as they rise and fall in sweeping crescendos of sacred space under the bulbous domes of the multifaceted structure. While much of the stone is broken, and almost all of the mosaics are fractured to worn shards after successive earthquakes, speculation that Ottomans desecrated the work is quickly overturned by the fact that they ruled the land absolutely and could have categorically demolished the building if they wished. Interestingly, however, there are accounts by European travelers who paid to acquire invaluable pieces of the site-specific artworks. Karabacak combed through the mosaic narrative with finesse and subtlety, conveying hard facts along with the emotional grace of the religious art like a descendant of its great thinkers. Although obscured by scaffolding, the story begins with a pantheon of Mary's ancestors, going back to the Jewish prophets and kings of Jerusalem. Its figurative representations pictured her like a typical Byzantine lady, in late Roman garb, with a long flowing robe wrapped tightly around her head as she emerged from the scenes of her miraculous birth by Joachim, her marriage to Joseph and conception of Jesus. In the innermost chamber, also blocked, her death scene has seeded perennial contemplation about the afterlife, as her Jesus seats a newborn child on his lap opposite her deathbed.

A parallel to Islam, and to history

The weight of history is uplifted by the ecstasy of faith over Istanbul's ancient foundation where Karabacak lives to speak of great, though often little-known teachings that evidence the unity of the human story and the intimate intricacies that reveal a total solidarity. He held his head back to examine the radiant patchwork of ceiling mosaics, which he admits has led to some chronic sore necks after years guiding in Chora, and beheld the mosaic, "The Virgin Fed by an Angel." It depicts the Virgin Mary sitting isolated in a temple, under a canopy, where she is visited by an angel who offers her bread, or manna. In one of the longest chapters in the Quran, titled, Ali-'Imran, about the family of the Virgin Mary, verse 37 recounts the same exact story visualized by the Chora mosaic. The relationship is doubly profound because it shows the great rift of imagistic versus calligraphic cultures that differentiates Muslims from Christians, but more, it identifies unmistakable proof of accord between the two religions, accounting for the beliefs of over 4 billion people.

And surprisingly, not all of the mosaics are directly religious. In one, depicting the life of the Virgin Mary and her husband Joseph, they travel from Nazareth to Bethlehem and back to be counted in what is likely the very first official census that the Romans took immediately prior to the year now remembered, simply, as 0. Another picture shows Joseph just going to work. It has no higher meaning, which is part of the reason why the Chora mosaics have a mystical tone, simultaneously aligning to an ecumenical worldview and also to the union of religious art with the historical record. Yet, the anonymous artists of the church mosaics and frescoes at Chora, many of which are masterpieces, endure as mystics beyond time, far from glamorized like contemporaries since the Renaissance.