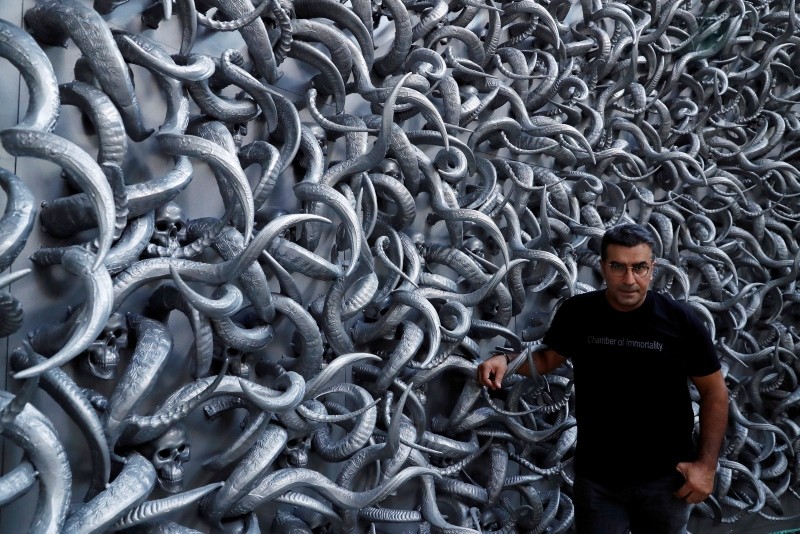 Güneştekin says his work "Chamber of Immortality" draws on the Epic of Gilgamesh - the Sumerian king who tried in vain to find the secret of everlasting life, and on the closely related Biblical story of Noah, whose ark some believe landed on Mount Ararat, Turkey's highest peak.

The centerpiece is an enormous metal skull with a twisting animal horn jutting from its mouth, made up of 11,000 smaller skulls, all crafted by hand. Around it sit two curved walls made of yet more skulls, some of which sprout animal horns from their ears, temples and mouths.

The large skull represents Noah, while the tongue-like horn that spills from its mouth represents animals, Güneştekin said.

"In a way, it shows how the concepts of human and animal are nested within one another," he said.

The structure, which tool 4-1/2 years and $1 million to create, is inspired by Göbeklitepe, a 12,000 year-old temple in Turkey that this year became a UNESCO World Heritage site.

A self-taught artist, he is known for unconventional techniques to depict oral narratives, myth and legends mainly from Anatolian and Greek civilizations.

"Chamber of Immortality" will travel to London, Berlin and New York after being exhibited in Contemporary Istanbul on Sept. 20.