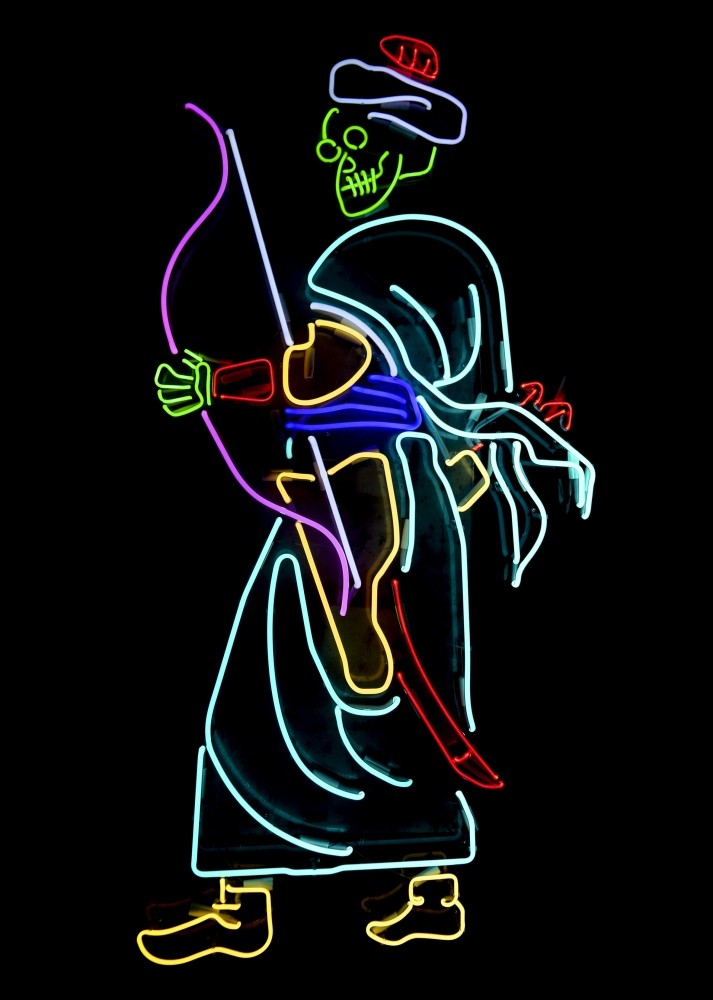 Artist Sarp Kerem Yavuz, represented by Anna Laudel Contemporary, takes over the historic Hüsrev Kethüda Hamam for an exhibition best experienced after dark. The artist's first sculptural works, made of neon, serve as a love letter to the video games of the 1990s. Entitled "Curse of the Forever Sultan" the exhibition will launch with a party immediately following the Welcome Reception at the Esma Sultan Mansion, located across the exhibition venue. The exhibition will be on display Until Sept. 27.

"Curse of the Forever Sultan" is a series of neon sculptures depicting various traditional Ottoman characters from the 18th and 19th centuries. Each sculpture is life-sized or larger, and designed as a 2-dimensional caricature of a member of the Ottoman court or military.

The green, skeletal aspect of these sculptures is a love letter to traditional video-game and science fiction from the late 1980s and early 1990s, particularly the 1997 LucasArts game, "The Curse of Monkey Island," from which the series gets its name.

The skeletons are satirical and humorous, belonging to a fictional world of the undead.

Most importantly, this body of work is a direct sequel to the artist's previous photography series, "Maşallah," in which Ottoman iconography was superimposed on bodies through the use of light projections.

Rather than being illuminated by an external light source, these skeletons glow from within, questioning the role our history plays in shaping our contemporary nature.

The historic Hüsrev Kethüda Hamamı in Ortaköy is the ideal venue for exhibiting a body of work that reimagines Ottoman iconography and combines it with contemporary art aesthetics.

"Kethüda" is the traditional title given to the subordinates of the wealthy families during the Ottoman Empire, and as such, it is the perfect home for the characters in the series, all of whom are military or civil servants in some capacity, such as a janissary or a court musician.

Born in Paris in 1991 and raised in Istanbul, Sarp Kerem Yavuz is a visual artist working primarily with photography, light projection, and video. He received his Bachelor's Degree in Studio Art with Honors from Oberlin College in 2013, and his Master of Fine Arts Degree in Studio Art from the School of the Art Institute of Chicago in 2015.

His works explore various aspects of gender, politics, religion, and violence. He is the recipient of several international accolades, including the 2016 Palm Springs Photo Festival Emerging Photographer award, presented by Leica Camera, the 2013 New Artists Society Award from the School of the Art Institute of Chicago and the 2013 Leah Freed Memorial Prize.

In 2013, he became the youngest artist to exhibit and be included in the permanent collection of the Istanbul Modern Museum.

His works are also included in The Luciano Benetton Collection as part of Imago Mundi, in the permanent collections of the CICA Museum in South Korea, the Norton Museum in Florida, USA, the Allen Memorial Art Museum in Ohio, U.S., the Polaroid Originals (formerly Impossible Project) Collection in Berlin, and the Soho House Collection in Istanbul and New York. He has been in over 30 exhibitions in Copenhagen, Sydney, Shanghai, New York, Chicago and Istanbul.

He currently lives and works between Chicago and Istanbul.