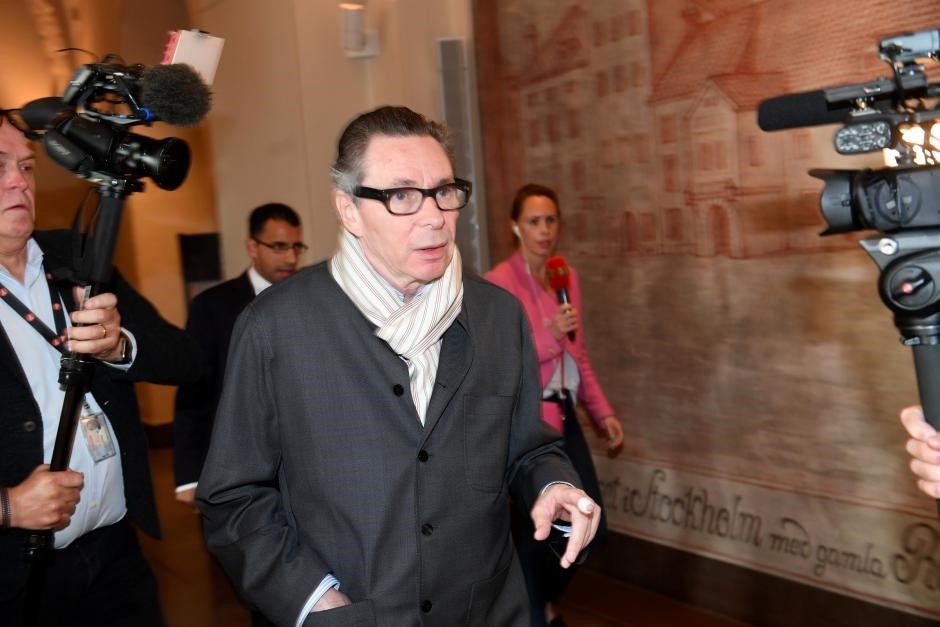 The man at the center of a sex-abuse and financial crimes scandal that is tarnishing the academy that awards the Nobel Prize in Literature was convicted of rape and sentenced to two years in prison on Monday.

Jean-Claude Arnault, a major cultural figure in Sweden, had faced two counts of rape of a woman in 2011.

He was found guilty of one rape but was acquitted of the other because the victim said she was asleep and judges said her account wasn't reliable.

Stockholm District Court said that the ruling by the judge and three jurors was unanimous.

Judge Gudrun Antemar said the role of the court was to decide whether the prosecutor had proven the charges beyond a reasonable doubt.

"The court's conclusion is that the evidence is enough to find the defendant guilty of one of the events," she said, adding the evidence "has mainly consisted of statements made during the trial by the injured party and several witnesses."

In Sweden, rape is punishable by a minimum of two years and a maximum of six years in prison.

Prosecutor Christina Voigt had demanded three years in prison for Arnault, who is married to a Swedish Academy member.

"This case is no different from any other rape trial," Voigt, the prosecutor, told Sweden's news agency TT. The victim's lawyer, Elisabeth Massi Fritz, said the verdict was "a big relief for my client who today believes in justice."

There were no immediate comments from Arnault's lawyer, Bjorn Hurtig, who earlier had said they would appeal if he was convicted.

Arnault, 72, had denied the charges, which have rocked the prestigious academy, with seven members either being forced to leave or quitting in April.

In May, the academy announced that no prize would be awarded this year.

Arnault, who is a French citizen, is married to poet and Swedish Academy former member Katarina Frostenson. She quit in April at the same time as former permanent secretary Sara Danius.

On top of that, Arnault also has been suspected of violating century-old Nobel rules by leaking names of winners of the prestigious award — allegedly seven times, starting in 1996.

It remains unclear to whom the names were allegedly disclosed, and it is not known whether it has been investigated.

After the first allegations surfaced in November, annual funding of 126,000 kronor ($14,000) to Arnault's cultural center, frequented by some academy members, was immediately stopped. The academy then stressed it had not been paid to Arnault personally.

All the allegations have shredded the academy's credibility, called into question its judgment and the scandal has sparked a debate over how to face up to its flaws. It has divided the body's 18 members — who are appointed for life — into hostile camps and prompted seven members of the prestigious institution to leave or disassociate themselves from it.

Commenting on Monday's verdict, Peter Englund, one of the board members who quit in April, told TT that he was "very pleased" that was justice was done.

Many in the Scandinavian nation, known for promoting gender equality, have expressed dismay over the scandal, which has exposed bitter divisions within the academy and given rise to accusations of patriarchal leanings among some members.

It began in November, when 18 women came forward in a Swedish newspaper with accusations against Arnault.

In April, the Swedish Academy said an internal investigation into sexual misconduct allegations found that "unacceptable behavior in the form of unwanted intimacy" had taken place within the ranks of the prestigious institution.