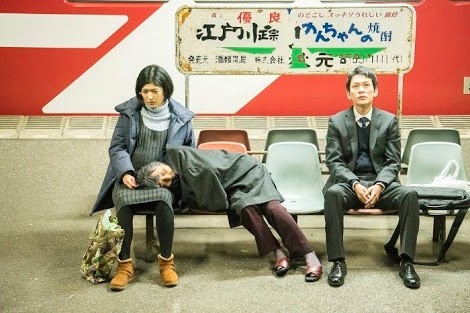 Fears of a future clouded by nuclear fallout and state-sponsored mind control have been captured on film by a group of Japanese directors who were tasked with presenting their visions of where life in their country was headed.

The "Ten Years Japan" omnibus has made its world premiere at the 23rd Busan International Film Festival (BIFF), the region's largest movie industry gathering, and it follows on from similar projects produced out of Hong Kong, Thailand and Taiwan.

"We have so many dimensions when it comes to social issues in Japan, we made it clear to the filmmakers we wanted their take on what exactly it is that they see as the problems," explained Japanese producer Miyuki Takamatsu, who instigated the pan-Asian project.

The five-part "Ten Years Japan" imagines citizens living underground to escape nuclear fallout - but dreaming of life in the sun - as well as coping under constant surveillance and with messages being transmitted into their brains via an implant.

It also looks at how Japan might end up dealing with its rapidly aging population, while other chapters focus on a daughter tapping into her deceased mother's digital data, and on life in Japan during a future war time. The production features work from directors Chie Hayakawa, Yusuke Kinoshita, Megumi Tsuno, Akiyo Fujimura and Kei Ishikawa.

"We wanted to discover new talent," said Takamatsu. "We thought it would be a good challenge to see who could produce films for this difficult topic and here we are, we have found them."

The original film in the "Ten Years" series came out of Hong Kong in 2015 and painted a bleak picture of the city under Chinese control.

It was fiercely political, coming on the back of the "Occupy" pro-democracy sit-in protests that brought the center of the city to a standstill for 79 days in 2014.

Despite a limited local theatrical release and condemnation by mainland Chinese authorities and their supporters in Hong Kong, the film was a major hit, picking up the top prize at the Hong Kong Film Awards.

"Ten Years Thailand," which premiered at the Cannes festival in May, drew on the talents of the likes of acclaimed director Aditya Assarat ("Hi-So") and is primarily concerned with fears of censorship and state control, while "Ten Years Taiwan" debuted at the Taipei film festival and tackles social issues such as the threat of nuclear fallout and the hardship of rural life.

The Japanese and Thai productions are slated for domestic release before the end of the year, while the Taiwanese film is set for a roll out in 2019.

"Ten Years Japan" might lack some of its predecessors' overtly politically charged bite but it taps into the talents of socially aware Cannes Palme d'Or winning director Hirokazu Kore-eda - who has his drama "Shoplifters" up for Oscar consideration - and is on board as executive producer.

It reflects Kore-eda's trademark languid style, often to chilling effect, even though Takamatsu said the director allowed the filmmakers full freedom in terms of subject matter and style.

"Hong Kong had one specific problem as its focus, in Japan there are many things to think about," said Takamatsu.

"[Kore-eda] didn't make any rules or give advice during production but he was involved closely in reading the scripts and advising on changes, and on getting the money needed together."

Veteran actor Jun Kunimura (know to Western audiences from "Kill Bill: Volume 1") plays a role in "Ten Years Japan" and said the experience had opened his eyes up to the worries of Japan's modern youth.

The "Ten Years" project came to life over coffee at the Far East Film Festival in Udine, Italy, in 2015 when the team from Golden Scene, which had distributed the original Hong Kong film, had been surprised by the positive and inquisitive audience reaction to a screening.

On Takamatsu's suggestion, and with another producer in Lorraine Ma on board, they decided to take the idea regional - and they are now considering extending the franchise into other Asian markets.

"It's a great platform for the filmmakers to imagine what they think of the problems of their countries 10 years later," said Golden Scene's founder and managing director Winnie Tsang.

"Different countries have different problems. Some of the problems may be universal but we can see the different culture in each country."

The BIFF continues until Saturday.