A trickster in disguise: The naive art of Kubilay Mert Ural 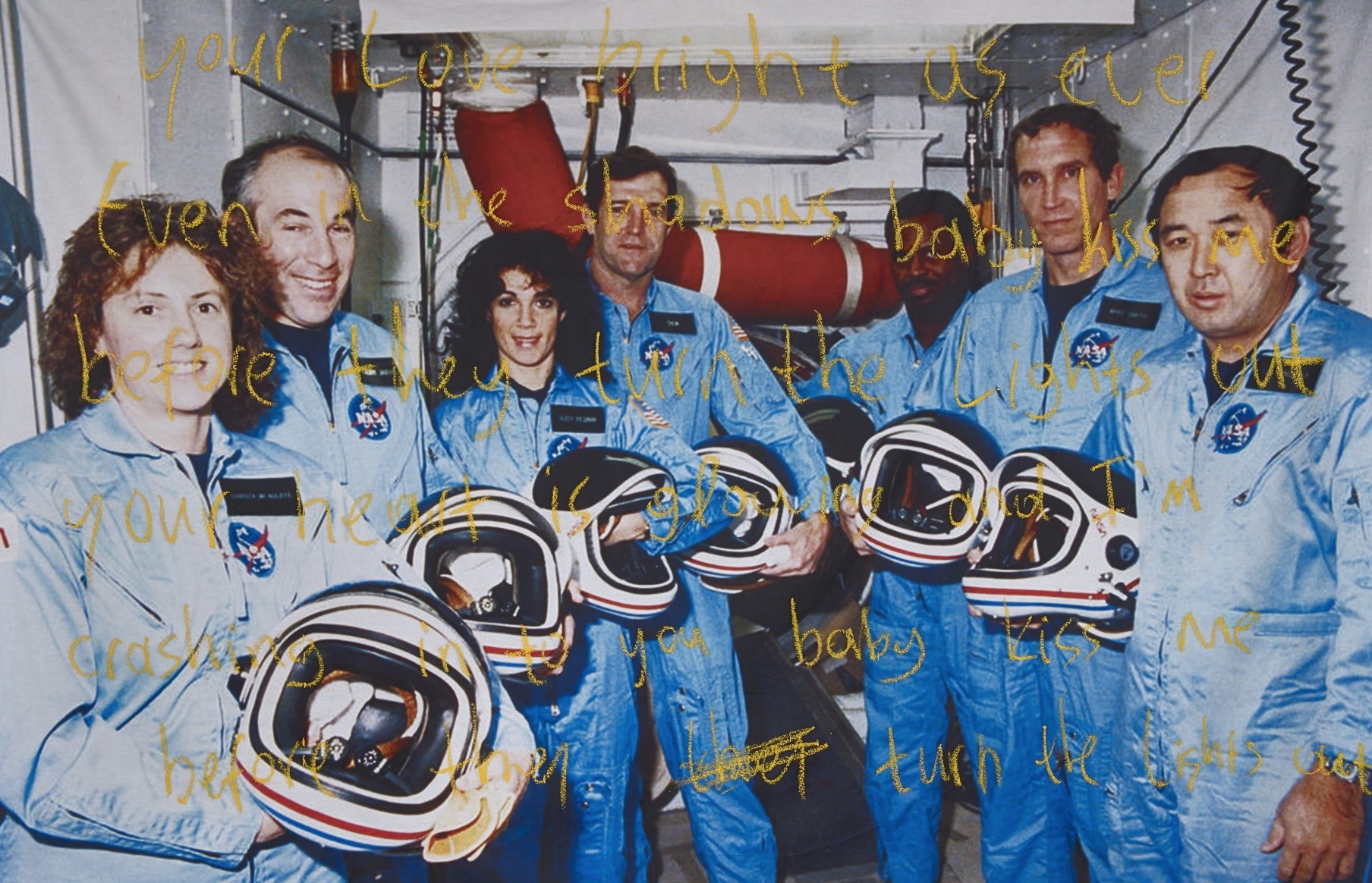 Until Oct. 20, the Istanbul-born, Amsterdam-based video artist, painter and interventionist Kubilay Mert Ural is exhibiting his first solo show in Istanbul at PİLOT Gallery, "Earthlings and the Space Problems." It is a comic romp of the interstellar imagination fired by pop cultural references

The underground art space, Co-PİLOT, is in a purgatorial state, waiting four years now and running to return to its street-level storefront, PİLOT Gallery, a former night club that would look out over Sıraselvıler Avenue bustling with rims and swagger leading up to Taksim Square in the sleek neighborhood environs of Cihangir, where artists have always made homes, studios and lives out of the air, thick with hints of a long lost heyday. Its spot straddles the subtle zone that spells unbecoming change for nostalgic inhabitants who count the years that have marked the end of an era on one hand.

PİLOT opened in 2011, starting out in the shorefront quarter of Tophane, sharing the core district cultural scene with important galleries that have since moved, like Rodeo, which relocated to London in 2015, and The Empire Project, led by Kerimcan Güleryüz, son of the notable artist Mehmet Güleryüz, when a hotel bought him out over proximity to Taksim Square. And then, Daire Sanat left and returned to its apartment venue in Cihangir on Susam Street.

Downstairs from the tea-stained sidewalk into a basement loft, the young artist representative Gülce Özkara greets with enthusiasm, as she only recently assumed her new role to liaise with creatives and guests, to take storytelling walks through unseen worlds where the passions and experiments of radical thinkers take form and are seen anew, often for the first time, in the early light of discovery.

In that spirit, the works of Kubilay Mert Ural descend from the Netherlands to his birthplace, for his very first solo show in Istanbul. To weary eyes, his art might seem utterly amateurish, frowzy as a neglected stray cat growling in the dust of a forgotten alleyway. He is, in fact, a studied artist confident on the edges of the Naive, a tradition of art that eschews discipline and grasps for the unfocused corners where all sense of training and technique is thrown off. Historically, its most famous progenitor is Henri Rousseau, whose lack of education worked in his favor when Picasso saw pure genius in his paintings. Truly, it is a stretch to compare Ural to Rousseau in any other way outside of genre concept, as the technical mastery, mystic sweep and crystalline sharpness of such pieces as "The Repast of the Lion" (1907) define the late developments of a legend in his time.

Interestingly, throughout the show, a lion appears very much like the disproportionately featured wild cat in Rousseau's classic masterwork, which is stunning for the detail of its lush, tropical background, but by a closer look reveals a very curious, apparently unskilled depiction. In turn, Ural repeats the painted image of the tiger four times in the show of thirteen works, projecting a sonic effect, as snarling imagined through silent visualization. Beginning with the opening piece by Ural on display at PİLOT, there are theoretical evolutions that the young artist prompts already in his bright, young career, currently an artist-in-residence at Rijksakademie Amsterdam at the promising age of 32, with a multidisciplinary, trans-media background in everything from sculpture to music and solid curatorial experience under his belt.

"Cheese head" (2017) stares down gallery visitors till frozen at the head of a staircase winding down into the main exhibition floor below, further beneath the cold, encompassing earth. Ural apparently saw a vision one breakfast over a dairy-rich meal in which a slice of cheese looked back at him with a primitivist air, something akin to the indigenous African sculptural influence in Cubism, a movement Picasso popularized during the interwar period after the scholarship of Carl Einstein, a writer who discovered that his visual ideas had precedent on the Dark Continent.

Ural cut out the profile formed of the cheese he would have eaten, and in so doing, transgressed his traditional Turkish value system. To certain folks, it would have been a complete demoralization, to make art out of his food. But, to Ural, it is conceivable that the piece of cheese had shed its identity as physical nourishment, instead taking on the spirit of some artistic mode of being that he sought to contextualize. He epoxied it messily to a 23 x 23 cm mixed media frame, streaked with a minimalist black-and-blue facade over a single orange line floating above a beige palette, almost reminiscent of the otherworldly schemes of a Rothko.

Before sinking to PİLOT's lowest, subterranean level, Özkara identifies "Cheese head" as the epitome of Ural's solo exhibition, with his knack for drawing out heavy themes in art history and world affairs from lighthearted acts of creative expressionism. Ural has all of the qualities of a nonconformist who trailblazes beyond the confines of academic curricula to traverse the reaches of novelty, to found original practices, with an act-first-think-later mentality. Even after studying at Istanbul's prestigious Bilgi University, and the Sandberg Instituut in Amsterdam, categorization in art seemed to him terribly beside the point of his sense for newfound creation. Yet, with his residency at Rijksakademie, and an upcoming show there in November, he is making his mark, officially, as Istanbul's man in Amsterdam, where he is in his element. He is also currently slated to exhibit works at Ellen de Bruijne Projects in April and Art Basel in June. 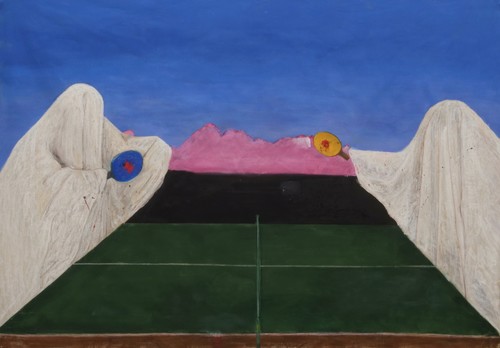 Ural is absorbed in the power of the future, where anthropocentric, earthly meaning is relative at best, and nonexistent overall. It is a philosophy reminiscent in the avant-garde jazz of Sun Ra, who was one of the most successful recording artists in history, teaching his band across the decades to think outside of the planetary box, to play like Martians. On that expansive, cosmic path, Ural gains the space, awareness and vibration by which he gains perspective enough to align with the creative forces of the universe. In fact, his thought process as a musician, in league with the interplanetary notions of Sun Ra, prompted him to install an untitled piece that is most stupefying among the works at "Earthlings and the Space Problems," as it is nothing more than a container for a foreign cleaning product with its printed lettering blocked out with tape, so as to convey the aesthetics of an album cover.

By zooming out from the human perspective, he then espies the activity of daily life with psychosocial explorations into the darkest, nether realms of being, where consciousness folds under the void manifest in the complete annihilation of reason. For one of his most significant, largest pieces, "Untitled" (2017), covering the wall at dimensions 142 x 134 cm, he has President Trump strung up by a satellite, orbiting the Earth, which as an homage to tacky, humanitarian campaigns for global diversity, is rounded by figures standing atop its surface who represent the haggard, volatility of human life on the planet. Dehumanized people, and the occasional animal, are poised with unsavory vulgarities referencing global chains of violence and the desensitizing deluge of disfigured life common to the news cycle and internet culture.

Most of the still works and installation objects at "Earthlings and the Space Problems" are untitled, except for two, "The power of the future" (2012), a compact, mixed media piece with tiger stripes behind a miniature painting of two enigmas in a dim landscape, and "XO" (2017), titled after a Beyonce song, one of his tongue-in-cheek barbs, a broad, 300cm-wide pastel on cotton reanimating her controversial music video intended to honor the victims of the 1986 Challenger disaster, when the entire crew of a space-bound craft went up in flames. NASA had responded with a stiff upper lip. They were not impressed. It is just the sense of humor that Ural conveys well, obliquely dark, to the effect of a sideswipe against the collective subconscious.

In his paintings, he portrays a dualism among his human subjects, mostly to exaggerate the themes of power and exploitation, age and history, the cruelties of civilization distilled to the wrong kind of touch between man and child, colonizer and colonized, and all over a simple game of ping pong between the Grim Reaper and the Prince of Darkness. It's a gothic aesthetic that churns beauty out of the seemingly ugly, emphasized to abandon with his garage rock, garbage grunge approach, leaving imperfections, tears, smears, and dissonances in the form and color of his depictions. And finally, his pair of video works at PİLOT run amok on the thrusts of dysfunction in the human family. "Wife Beater" (2018) follows a woman as she races desperately from the voyeuristic lens of her assailant, nipping at her heels as her blouse comes undone and she hysterically reaches for the empty space before her. His second video artwork is a collage of his collected, archived snippets and clips documenting his eccentric past as an artist-in-the-making.